Sports > Basketball > The NBA Takes Over the Holiday

The NBA Takes Over the Holiday 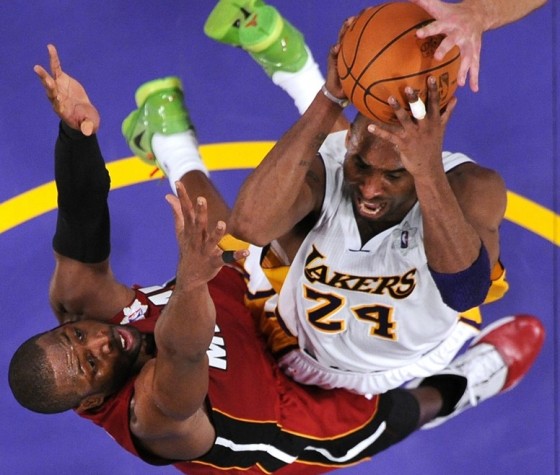 Too many stars for our Christmas tree...

While many of us were focused on the distractions of family life, the faith associated with religious themes of the season, honey-baked ham or the National Football League on Christmas Day, the stars of the NBA were putting in work.

Monta Ellis led the way for the Warriors in the 109-102 win over Portland, scoring 39 points to pace the way in a game most on the east coast likely missed. Ellis has quietly thrived as the offensive leader for Golden State this season, touting one of the best jumpers this side of Kobe on the left coast. He’s posted 30+ more often than not through games in December and has two of his seasonal best over the last week… add David Lee and Stephen Curry and you have a team sniffing at the doorstep of the playoff contenders. They just need to learn how to win.

Kevin Durant is already established as one of the elite talents in the game, and he put on a show for the basketball people on Christmas, scoring 44 with seven rebounds, four assists, two blocks, and two steals against the Denver Nuggets to lead the Thunder to a 114-106 holiday win. Guard Russell Westbrook helped push the pace with 19 points of his own, but it was Durant at the line (going 12-of-15 from the charity stripe) to proved detrimental to Denver… that and the complete lack of interest in guarding Durant.

Hard to blame ’em… they wouldn’t have won that battle regardless.

The Chicago Bulls came up short against the Knicks (no longer a rivalry, though we give the golf clap to the NBA for playing on it for those of us from the school of Jordan) but it wasn’t due to a lack of effort from Derrick Rose. The point man put in 25 topped only by teammate Carlos Boozer who threw in 26, but they weren’t joined by the rest of the Bulls as the Knicks enjoyed a thorough team effort to win, 103-95. Amare Stoudemire had a few highlights along the way but Rose’s effort to get the rest of the team involved (eight assists) and to play defense (six steals) served as eye candy for fans of flashy basketball.

These teams are surprisingly similar and could, if they continue down their current paths, rekindle that talk of a rivalry. This game was an entertaining reminder of games from the old-school days of #23, before Jordan and crew were winning with consistency. This Chicago team has the presence in the post now with Boozer and could be much better with Joakim Noah healthy, while the Knicks appear to have struck gold in Amare and the young pieces around him. Get Noah back working for the Bulls… get another piece to help Amare for the Knicks (Carmelo Anthony wants to be that piece… we’ll see)… these teams could be back on top.

The Celtics and Magic kept it going in the East in what proved to be a snoozer. Gilbert Arenas continues to get limited minutes for Orlando, leaving the two-man team of Hedo Turkoglu and Dwight Howard to take on the two-man team of Kevin Garnett and Paul Pierce… at least that’s what it proved to be on Christmas since the rest of the boys failed to show. Big Baby Davis was the only throw-in for Boston, giving Brandon Bass and Jameer Nelson the edge to beat the Celtics, 86-78.

The real entertainment in this game… watching Howard shoot free throws. He’s Shaq with a smoother stroke, going 4-of-12 at the foul line on Saturday. Horrendous, like most of the offense in this game. It was the wart on an otherwise pretty Christmas face.

LeBron clearly labeled the Lakers as an enemy of choice for the season, playing like a possessed aggressor against Kobe and crew on Christmas. James threw down for 27 points with 11 rebounds and 10 assists to get the triple-double and the 96-80 win… on the road noless. The Big Three were hitting on all cylinders with Dwyane Wade scoring 18 points and Chris Bosh throwing in 24. The dominated from beginning to end and put the wood to an uninspired Lakers squad who struggled to hit shots. Kobe’s work from the three-point line kept it somewhat respectable, but that’s being kind.

The Lakers got worked and the rest of us should have the message. The time for the talk of disappointment is coming to an end, and if the Heat move on to do what we all expected they would coming in, we may look at Christmas as the day when the switch was turned on.

If that wasn’t enough, you got Blake Griffin going off for the double-double on the home court to get a big Sunday-night win against Phoenix.

That’s a holiday weekend loaded with amazing action from the game’s best… listen, if you are focused on football, I understand. The NBA season is as long as wedding-night boner and the NFL seems to come and go with the quickness. The Heat have already died and been resurrected… and we aren’t event halfway through the season. If you are short on time allotted to the tube, a good chunk of ya’ spent the day watching a second-rate NFL game or the college bowls rather than turning down the dial to dudes on the hardwood.

Just understand that while the regular season is winding down on the gridiron, the action is already warmed up and cookin’ when you go indoors. If you can make time for both, you should.