The New Seuss, The True Seuss 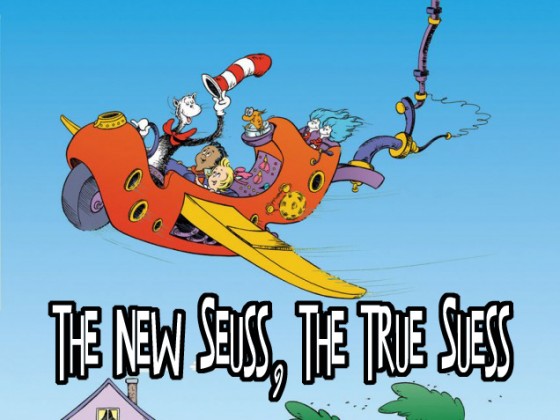 We here at Gunaxin love us some Dr. Seuss. His rhyming allegories for society’s ups and downs are both legendary and timeless. Who didn’t grow up reading Green Eggs and Ham or If I Ran the Zoo? Pick up a Seuss book and start reading it to a child, and he or she won’t be the only one enthralled. I have three kids and I think I’d pick Seuss over just about any other book in our multitudinous collection. He’s just that cool. Well enough of that… we all understand his books are phenomenal. Ah, but what about Seuss in cartoons and movies? Yeah, well, here’s where the real issue lies.

Back in the 60’s and 70’s, very smart decisions were made and Seuss’ work was turned over to the very capable hands of Bugs Bunny’s own Chuck Jones. He and his team of animators very faithfully turned stories such as How The Grinch Stole Christmas, The Cat in the Hat, and The Lorax into wonderfully lively cartoons, most of which included music often OK’d by Seuss himself. Here are a few samples.

Yeah, I think I could pretty much listen to Boris Karloff read a DMV manual. Hard to believe a guy most well known for not speaking a word in Frankenstein can impart such perfection to a Seuss story. Anyway, they are but three of the far better attempts from years past to bring Seuss to life. Some of the best, I might add.

But soon the proverbial shit was to hit the very real fan. Someone, somewhere decided that one of Seuss’ most beloved books, How The Grinch Stole Christmas, needed the live action treatment. From what I understand, Ted Geisel’s wife was on board the whole process the entire time. Honestly, I bet she likely kicked herself had she known ahead of time what was to happen. First of all, Ron Howard happened. Look, Richie did a fine job with Apollo 13, Parenthood, Willow, and Backdraft… but he was really the wrong dude to hand a Seuss project to. It was like handing a loaded gun to an over-enthusiastic gun nut with ADD. Yeah, he took the reigns and ran with it, but he really loaded it with saccharine fluff and completely unnecessary plot points like a far-too human Who-ville and the Grinch’s bizarre back story. Worse yet was the inclusion of Jim Carrey. I have nothing against him per se… he’s like porn: awesome in like ten minute intervals, but really hard to watch for an hour or more. That being said, he was -sadly- the best part of the movie. A movie that would have been far better in more capable hands. Oh well, here’s a clip.

Wow, it has gotten almost too difficult to even write more about these horrendous failures. What ho? Is that a silver-ish lining around these dark clouds? Is that a glimmer of hope I see in a slightly brighter ray of sunshine? It is! It’s Horton Hears a Who! And it was actually, kinda, sorta, okay! Well, better than the last two celluloid abortions at any rate, so that’s something… right? Finally, a company that really had a feel for what Seuss was about got a hold of the next project and how could we deny them their turn? After all, they did the Ice Age movies! Yes, this sounds decent! Who do we have for voices? Well, Steve Carell as the Mayor. Okay, not in the book, but I like the guy… go on. How about Carol Burnett as Kangaroo? Wow, she’s a legend! More! Sure, Jim Carrey as Horton! Fuck… ya just blew it. Not so fast. He more than makes up for his brutal murder of the Grinch and on the plus side, he’s not actually in it. Okay, I’ll go with it. Was it faithful to the source material? Ahh… about that… You see, the book is actually kinda short, so… we added stuff. (Sigh) Fine. As long as it’s better than the previous shit. Here’s a clip.

And then all was kinda quiet. Rumors flew of a few new works on the horizon, the worst of which is the live-action/animated version of The Lorax that’s sure to make Seuss rise from his grave and consume the brains of those who wronged his works. But wait? What’s that? PBS broadcasting? And they have a new show call The Cat in the Hat Knows A Lot About That? Ugh, that sounds kinda, I don’t know, not good. But wait… again! Guess what? Not only is it not bad, but as it turns out, it’s also the best adaptation of Seuss’ works since the 70’s! Seriously? Seriously. Sure, it’s a PBS Kids show that is fully geared toward children, but it’s fun! It’s animated as though it dropped right from the pages of the book! The Cat is genuinely sweet, funny, naive, and goofy all at the same time! And he’s voiced by the genius that is Martin Short sounding just like the Cat ought to! Hey, I’m as surprised as you are. No, I’m not expecting those of you without kids to even try to watch this, but since my youngest is 4 1/2, I did. And I’m glad. It’s a wonderful show with 20 1/2 hour episodes already in the can, a week’s worth televised. If you, however, are a die-hard Seuss fan looking for some retribution, this is the show you’ve been waiting for. Here’s your clip.

Weirdly, Martin Short just, somehow, IS the Cat. He’s perfect! He let’s loose just enough, has a great singing voice, and really just fills those wacky shoes to a T. I like this show, Sam I am, and I am 36! Nostalgia is wonderful.