Gadgets > Electronics > The Onion and the iPhone

The Onion and the iPhone 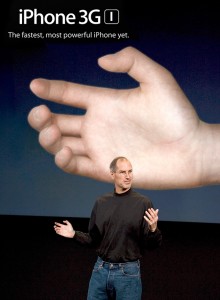 The Onion has a fairly long history of goofing on the iPhone. Their latest bit is announcing the iPhone 3GI:

“I am proud today to introduce to those who really, truly deserve it, our most incredible iPhone yet,” announced Apple CEO Steve Jobs, extending his seemingly empty left palm toward the eagerly awaiting crowd. “Not only is this our lightest and slimmest model ever, but as any truly savvy Apple customer can clearly see, it’s also the most handsome product we’ve ever designed.”

Back in 2008, they had a story about an iPhone Left In Hot Car For Three Hours:

“Responding to calls from concerned passersby, who observed the iPhone sitting in a vehicle in the parking lot of the Westfield Shopping Center, police arrived on the scene at approximately 4 p.m. and immediately intervened to save the device,” said Winnetka police chief Douglas Blaine. “Security cameras have shown that the iPhone had been in the car—with the doors locked and the windows rolled up—since 1 p.m. Due to the tragic and highly emotional nature of this case, we cannot say any more at this time.”

and in 2007, the Onion was the first to announce the features of the new iPhone:

Apple is set to release the much-hyped iPhone Friday, June 29. Here are some of its most highly anticipated features:

You get the idea, you can see more iPhone articles at the Onion, and I’ll save you the trouble of doing your own search.