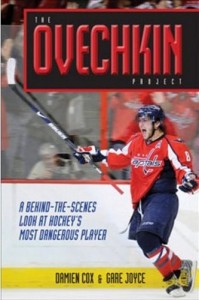 Several athletes these days generate enough interest to justify a book, and Capitals fans were initially pleased to know that they’d get a more in-depth view of Alex Ovechkin, one of the best athletes Washington D.C. has ever had. But the “The Ovechkin Project” isn’t necessarily a biography of hockey’s most dangerous player, but a thesis on a question that no one asked.

The book chronicles Ovechkin’s life in Russia, his time with Moscow Dynamo and days in the World Juniors. It details the many factors – including the signing of Jaromir Jagr and the timing of Ovechkin’s birthday – that needed to happen in order to get him to Washington. It narrates many familiar moments, such as the nationally televised game on Super Bowl Sunday. It talks about the disappointments last season in the Olympics and playoffs, the suspensions, and the NHL awards ceremony in Las Vegas. Readers also get a look into related stories, such as the rise of Bruce Boudreau and how that benefited Mike Green and David Steckel in particular.

But the underlying theme of the book is how Ovechkin supposedly changed from the fun-loving, carefree person he was in his rookie season to something different today. To prove their point, authors Damien Cox and Gare Joyce too often make unnecessary and biased assertions, and focus on – shocker – how frustrated Ovechkin must be because he hasn’t yet won a Stanley Cup or Olympic gold medal. The authors also suggest that Ovechkin will come to regret his long term contract with the Capitals because shorter-term ones could have ultimately paid him more. Does anyone think Ovechkin is losing sleep over this?

That’s not to say the book completely throws Ovechkin under the bus. Aside from describing some Washington Capitals history and other things that fans would find interesting, the authors interview people who have benefited from Ovechkin’s generosity and thoughtfulness. Take away the needless quips and silly claims and the book has the making of a halfway decent look at the Washington Capitals and the arrival of Alex Ovechkin. Capitals Director of Media Relations Nate Ewell says that Cox and Joyce were given access to everyone in the organization but Ovechkin, who opted not to participate. This likely created some bitterness that made the authors tilt the writing in the direction that ultimately earned the book sour reviews, including this one.

Because of smart PR by Ted Leonsis and the Capitals organization, many fans – clearly the target audience of ‘The Ovechkin Project’ – made a decision not to read it even before it hit shelves. And Cox did further damage by claiming Ovechkin’s contract shouldn’t have been approved, which earned a rebuttal from Ted Leonsis. But the very worst thing? The book contains an unacceptable number of typographical errors, which is inexcusable for anyone but breaking news bloggers.