Humor > Videos > The Past Decade’s Most Irritating Human Spokes People

The Past Decade’s Most Irritating Human Spokes People 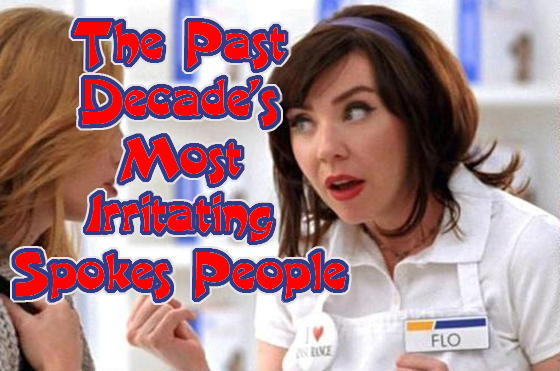 Understandably that title description is a little vague, so allow me to elaborate. We all know (well, all of us in an area that has one) that the talking tire man from Belle Tire is quite possibly the most annoying anthropomorphic car part/spokes mascot that many of us has ever seen, but he’s not human. Ronald McDonald on the other hand? He’s borderline ridiculous, though not enough for this list, however he is human so, for illustration purposes, you get the idea. This list concerns those few folks… those humans, who have come down the pike over the past ten years and have managed to stink up our TV and radio signals so much that they’ve left scars on our collective psyches that won’t soon go away. So please, if necessary, take a sedative and scowl along with the rest of us as we relive some of commercial-dom’s most irritating spokes people.

‘Dude, You’re Getting a Dell!’

Ah, Ben Curtis, how we as Americans so richly desired to bludgeon the life out of you with your own hocked products. Your name was Steve in your abhorrently grating adverts and you sat there, as lackadaisical as humanly possible and announced to the world, in that doped-up drawl of yours, that, ‘Dude, your getting a Dell.’ Forget the fact that Dell’s sales skyrocketed, the simple fact remained that a poor choice of a messed up marijuana purchase shut you up for good. God bless stupidity.

The funniest comment I read about this ad (especially the rappers) has a pretty nasty expletive, but it’s something like: “It’s cereal, dude! Calm the f*ck down!” Awesome. Anyway this is about the kid, specifically. His real name is Blake Kiessel and he’s obviously having far too fun a time revolving entirely around a bowl of cereal. I can honestly say that never, ever, not once in my 35 year in existence has a breakfast food made me rap and/or turn significantly more awesome. I can’t wait till harsh reality catches up with this doofus.

This one is sort of a collective since it seems regardless of which lady is the current spokes-person for the weight loss company, they always manage to fill the commercial with little more than vapid comments and hackneyed quips. It all started with Monica Lewenski (believe it or not), then Kirstie Alley (she eventually rolled off the wagon), now Valerie Bertinelli and the inexcusably annoying Sara Rue who does little more than spout chat abbreviations and look doughy. Thanks for ruining my TV pleasure.

Doncha just love it when a company’s CEO takes the reigns of an ad campaign to make it somehow seem more legit and less underhanded? Yeah, me neither. Dan Hesse is the current executive chief of Sprint and is now, inexplicably, its ad head. What a stupid idea. Sure, he seems innocent and caring and all man-of-the-people, but we all know that’s just the calm before the shark’s teeth. I guarantee you that away from the cameras, he’s the same jackass, conniving business head that everyone else is in his position.

He may look like a glorified cartoon character, and with that sadistic, horrific grin forever frozen in time on his face, it’s easy to understand that. But, unfortunately, he is all too human. This guy is quite possibly the most evil looking commercial mascot in the history of Fast Food. He is an insidious trouble maker, a hapless hand-out giver, and a seething volcano of violence willing to explode at a moment’s notice. All I wanted was a damn burger.

Little Caesar’s has inundated the very country in which we live. For years, it was ‘Pizza Pizza’ and you could get basically a free pizza whenever you bought one. Then, their everyday pizza deals arrived offering such cheap prices as five dollar pies and pan pizzas for seven bucks. Oh and then the ads arrived. And so did the Caesar’s desire to make every pie ‘Hot N’ Ready’ and to plus-sell every other item most people had forgotten they even offered. But why not let these complete idiots point you in the right direction via interpretive dance. No wonder I hate their pizza.

Sadly, for those of us in the Michigan area of the contiguous United States who also happen to be either Red Wings, Tigers, or Pistons fans, we all too often get bombarded by Belle Tire ads during said sporting events. In fact, the Tigers have a Belle Tire tarp over right field where homers can land and award prizes. The Wings even have Belle Tire ‘Power Plays’. Yeah, it’s kinda everywhere. But, the dude that heads these commercials is a colossal douchebag.

Somehow, the least annoying person to come from the gay-tastic ‘Will and Grace’ was actress and smokin’ hot Megan Mullally. But, as Epic Failures often do, she collapsed under the weight of her own worthless stardom as she anchored a pointless talk show in 2006/07. So, where is she now? Well, aside fro a new sit-com no one’s ever heard of, she’s also shilling a butter-like substance while simultaneously ruining (if thats even possible) a Disco tune. Check it out and just try not to jab steak knives in your ears.

HP, You Disappoint Me.

What could be more randomly hysterical than a guy who looks and sounds like a lanky Hugh Jackman who spouts non sequiturs and goofy noises? Apparently HP figured no one, cuz that’s the dude (Rhys Darby) they got to head the new ad campaigns. Look, I’ll give you the fact that he is slightly funny, much like a faerie in a forest fire or a murdered clown is funny, but the more the ads aired, the far more annoying they became.

Barbarians at the Gate

Capital mother-f*ckin One, what is the damn deal with you guys. Your ‘What’s in your Wallet?’ commercial series could have been so much more and really could have been far funnier, but no, you had to wedge it into the ground like a plane wreck and bury us in a slew of bad ads featuring, of all things Barbarians (or Vikings, whichever you prefer) including one played by Revenge of the Nerd’s Ogre. Say it ain’t so! Oh, it is so f*ckin so.

I love York Peppermint Patties. There’s just something about that chocolate and mint combination that makes me long for Halloweens as a kid when I’d fawn over the houses who gave Junior Mints… anyway, they’re good. But I’ll tell you what’s not so good: their new commercial. It features the most oddly misshapen female I have personally ever seen with a pair of queer off-set eyes that just bulge from her skull… she looks like Alfred E. Newman mated with the Brundle Fly. Anyway, I suddenly have less of a taste for York.

Go With the Flo

Despite the fact that I, among millions of others, simply adore Flo, she has just as many haters. Oh, I can surely understand their misguided rancor toward her and her Progressive ads, as they do, sometimes, border creepy and incessantly irritating, but she’s just so damn cute! Yeah, yeah, they are getting repetitive and it reeks of ’15 minutes’ that are very nearly up… but the fact is, Flo has a following and regardless of how you feel, she’s sticking around a while.