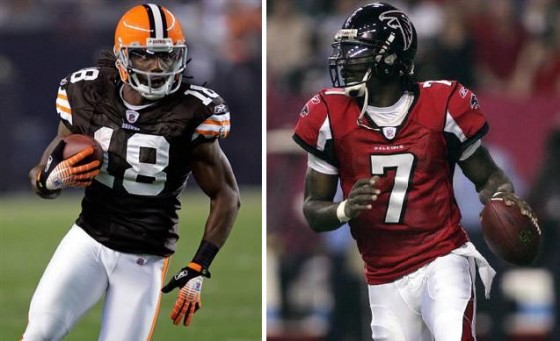 For whatever reason, an inordinate number of NFL ballers have been running afoul of the law lately. Despite having millions at their disposal and scores of minions lining up to do their bidding, these pampered alpha males feel compelled to let their bad boy flags fly. Apparently, fame and fortune ain’t easy. Although I’m just a lowly freelance writer…the ways of NFL superstars frighten and confuse me. Leading this lawbreaking charge are drunk driving pedestrian killer Donte’ Stallworth and the Godfather of dog fighting Michael Vick. This dastardly duo have been stealing most of the recent headlines, but there are several others guilty of all matter of malfeasance. If Donte’ and Mike are the parents, then they have six naughty tykes. Let’s call this “Donte’ and Vick Plus Six.”

Notable crimes: Charged with DUI and second-degree manslaughter after killing a pedestrian in Miami Beach back in March.

If it was me: I would be staring at 30 years behind bars fighting off creeps like Zed from Pulp Fiction. My question is, how does one play football if one is confined to house arrest? Do they wear one of those fashionable ankle collars on game days? That would be cool.

Notable crimes: Accused of giving herpes to a chick. Used “Ron Mexico” as an alias to fill his herpes medication prescriptions. The mastermind behind an interstate dog fighting ring. Failed a drug test while on bail.

If it was me: I would have been fed to a rabid pack of pit bulls piece by piece, only to have my bones tossed into a furnace. Vick should be back proving how overrated and ineffective a quarterback he is sometime in 2010.

Number of arrests: 1 big one.

Notable crime: Shooting himself in the leg with his illegally possessed handgun.

Punishment: To be determined. He’ll probably get the customary pro athlete wrist slap of probation/community service and at least an eight game suspension.

If it was me: I would have blown my big toe off and ended my lifelong dream of becoming the world’s top foot model.

Brandon Marshall – Attempting to whine his way out of Denver

Number of arrests: 4 since 2006. In addition to numerous other run-ins with police.

Punishment: Not very much. Anger management counseling, probation, community service and a one-game suspension in 2008.

If it was me: I would have served at least a few months of jail time. Marshall is either very lucky or not the habitual offender we all think he is. I’d go with the former. He’s gaining fast on Chris Henry. Speaking of Chris…

Punishment: Minimal jail time due to pleading guilty multiple times. (I’ve never understood why admitting you effed up keeps you out of prison.) Has been suspended 17 games in his career and is running out of strikes.

If it was me: I would have been fired from my job and be working at a car wash. For some odd reason, most employers frown upon lengthy rap sheets. The NFL is not among those employers.

Adam “Pacman” Jones – Living the life of an irresponsible moron

Number of arrests: Somewhere between 6 and 11. Reports differ.

Notable crimes: Brace yourself: Assault, vandalism, obstruction of justice, disorderly conduct, public intoxication, marijuana possession and failure to appear. He’s beat up strippers, spit in a chick’s face and fought with his own bodyguard.

Punishment: Suspended the entire 2007 season and six games in ’08. Incredibly, Pacman has avoided serious legal incarceration. He’s a true dumbass and not a very good cornerback, but I still wouldn’t be shocked if he makes it back into the league.

Matt Jones – Begging for a job

Number of arrests: Only 2. What a lightweight.

Notable crimes: Felony possession of cocaine after cops discovered him cutting lines while seated in his SUV in 2008. Oops. Violated terms of his probation by failing a drug test earlier this year. Also under investigation is whether being a white wide receiver is a crime.

Punishment: Suspended for three games in 2008. Spent five days in jail in March 2009. Was cut by Jaguars after being released from jail.

If it was me: I’d admit I was an alcoholic and rent an apartment above a bar.

Number of arrests: Officially 1, plus two other investigations.

Notable crimes: Hit and run. Felony possession of a firearm. Was accused of sexual assault, but the case was thrown out due to insufficient evidence.

Punishment: Avoided criminal charges for hit and run: fined $100 and driver’s license was revoked. Sentenced to 3 years probation and 80 hours community service on gun charge. He will also serve a three game suspension to begin the 2009 season.

If it was me: I’d move the hell away from Buffalo, New York. That lake-effect snow is brutal.