The River: Smoke Monsters, Spirits and Dolls, Oh My! 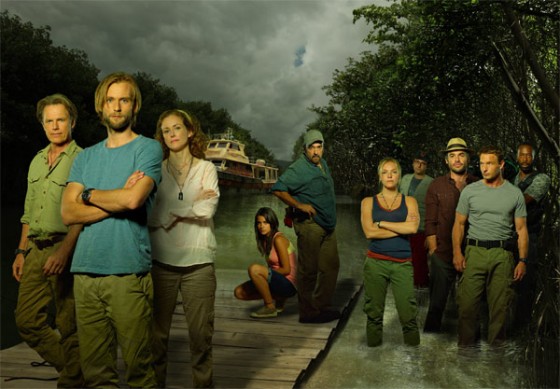 ABC threw everything including the kitchen sink into Tuesday night’s 2-hour premiere of The River, a found footage pseudo documentary style supernatural adventure thriller set in the Amazon jungle, and the ratings were still mediocre (2.4 adult demo). Although, to be fair those numbers derive from the archaic Nielsen Ratings system that fails to account for DVRs and people like me who watched the episodes on Hulu last night.

My annoyance for all things TV ratings aside, was the show any good? Eh, yes and no. Combining elements of Lost, The Blair Witch Project, Anaconda, Sunshine and The Crocodile Hunter, the opening installments did a serviceable job introducing the principals, as well as setting up the central mystery, which involves the search for renowned nature explorer Dr. Emmet Cole who disappeared under strange circumstances in the heart of the Amazon river basin.

Leading the expedition are Cole’s estranged wife Tess, and twenty-something son Lincoln. Joining them are members of a documentary film crew, a mechanic and his daughter, a German bodyguard and Lincoln’s childhood sweety and Emmet’s research assistant, Lena. It’s too early to tell what’s the deal with each character, but the Kraut and Lena definitely aren’t who they seem.

One thing for sure, it can’t be accused of easing into the action as it wastes little time diving into the dark and murky waters of what appears to be a serpentine plot. Evil spirits, black magic, ghosts and demonic dolls all play an important role in the proceedings, and yes, the cloudy black spirit in question bears a striking resemblance to another smoky monstrosity that frequented the jungles of an ABC series.

The array of spooks and haunts were weird, but not particularly scary. An extended night sequence meant to be unsettling reminded me too much of NBC’s I’m a Celebrity… Get Me Outta Here! to cause a stir. I kept waiting for Spencer Pratt and Heidi Montag to pop out screaming, “WE’RE BACK!!” That would’ve made me soil my undies. The director of Paranormal Activity, Oren Peli, is one of the co-creators, which might explain why I laughed more than shuddered.

I’m just not sure how long they’ll be able to sustain momentum before viewers get bored, if they haven’t already. Chasing one guy for two or three seasons could get old in a hurry, no matter how many pitfalls and obstacles the writers construct. Of course this could be moot since it only has eight episodes to make an impression.

And don’t think just because Steven Spielberg’s name is attached it will get a free pass, His recent forays into the small screen have yielded the average Falling Skies, the disappointing Terra Nova and the unwatchable Smash. Nevertheless, I’ll give The River at least a couple more episodes before deciding whether to dump it. But my Tuesday schedule is jam-packed with Justified and Southland, so ghosts in the Amazon will have to settle for third fiddle.