The REAL Scariest Prank Ever

Every Halloween you will see countless websites listing the scariest pranks ever performed. However, most of those pranks suck, since they rely mostly on terrifying the person through an unexpected jump scare, scientifically the easiest way to make someone shit their pants. Seriously, we don’t care how much planning goes into your prank, if it involves “jumping out and scaring someone” that’s just lazy.

With that in mind we wanted to pay tribute to a classic and criminally beautiful and terrifying prank by the guys at Just For Laughs. Here are three reasons their Grim Reaper prank (video at the bottom) is potentially the most soul clutching example of horror ever captured on film.

A good prank should be unexpected, and where do people least expect to feel like they’re about to have their spine ripped out of their body and flushed straight to hell? When they’re buying cuts of substandard beef and yogurt of course, duh!

The prank is set in a quaint English corner shop. Using some camera trickery and a total lack of morals, the crew set up a fake security feed that will make the Grim Reaper himself appear to stand behind a given person when they’re trying to buy their various amounts of toilet roll. 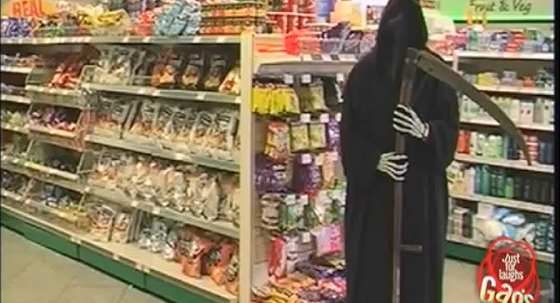 So already we’ve got the makings of a great prank, won’t it be hilarious when all those old people coming to buy their daily newspaper look up and see the personification of Death itself looming over their shoulder. Old people crying is always a big ratings draw. But there are plenty of great pranks out there, to be a truly brilliant one you need …

So the crew already have their Grim Reaper that is set to appear over the shoulder of any unsuspecting person wanting to buy a Mars bar for double the cost they could get in a supermarket. Making them think that they’re going to die will surely teach them a lesson for supporting local businesses! But it’s not enough, since the person could easily turn around, see there’s nothing behind them and simply assume they’re going insane, and that certainly wouldn’t do would it? YouTube demands fear, damn it!

So, to really make sure people know they’re absolutely going to die, the pranksters also position an old man to stand behind them. Oh, did we mention this man is also carrying an actual scythe and has the most intense rape-stare you’ve ever seen. Because just carrying a deadly weapon in a shop wouldn’t be scary enough. 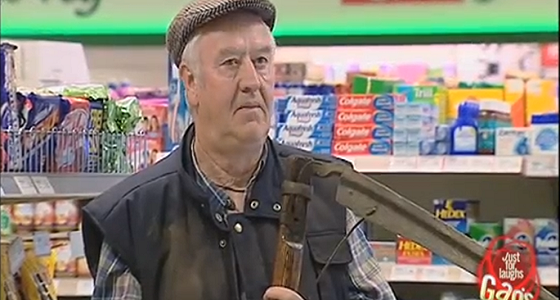 Those are the eyes of a man who has killed for fun.

So just in case the people being pranked don’t buy that the Grim Reaper stopped in to buy some Colgate and a few tampons, they’re greeted to the sight of a very real old man inexplicably carrying a weapon of death behind them when they turn around. Oh and he winks when they see him. 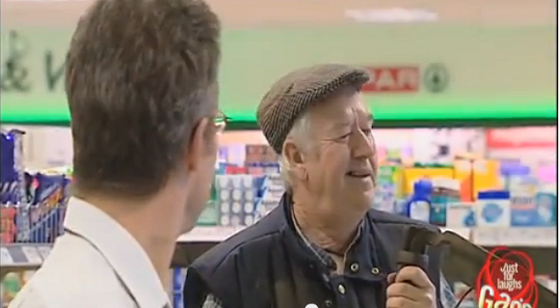 Wink back or I’ll bury this in your shoulder blades.

If that doesn’t scream “I AM A SERIAL KILLER” we don’t know what does. But the true proof of a good prank is in …

As mentioned there are hundreds of Halloween prank videos out there and they all have something in common, they all rely on a jump scare. Which is funny, but the person wasn’t really scared, they were just surprised. You know a prank is really scary when people don’t jump, they just stare forwards silently contemplating how much of their life they’ve wasted.

Just look at this guy, he looks like he was just diagnosed with every terminal illness known to man and on top of that THERE IS A GUY WITH A KNIFE ON A STICK BEHIND HIM. 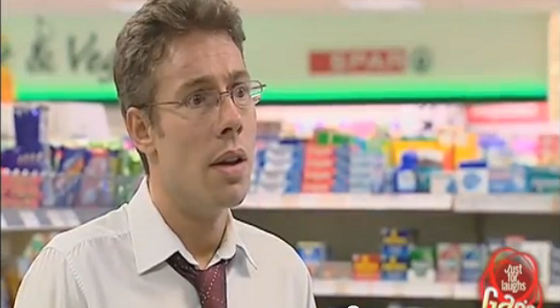 I regret not punching more homeless people the most.

Or this guy who looks like he wants to rip out his own eyes to un-see the unstoppable killing machine that has decided it’s his time. You can literally see his heart begin to beat faster. 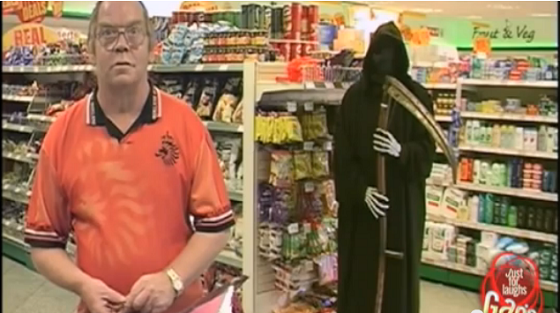 This is actually a GIF, he’s that scared.

Or this lady, who literally breaks down and nearly cries as she watches the Grim Reaper silently float towards her. Seriously watch this GIF and tell us it couldn’t be a still from a geriatric re-boot of the Final Destination movies, which we’d actually watch, if only because these people can really nail the, “I’m going to fucking die” look.

Shhh, it’ll be over soon.

This prank may not have the highest production values or even the most original premise, but holy shit you can not argue with the results. These people are terrified and you know what, so few pranks do that these days.

See the full prank and watch the terror for yourself, below.