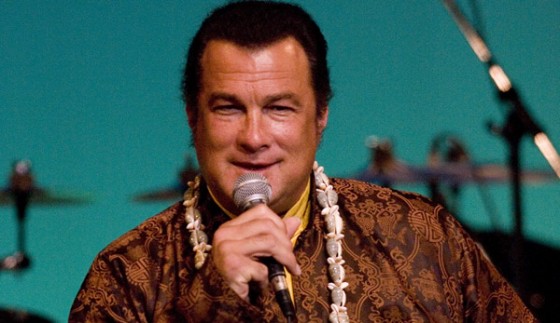 We don’t have anything against creative individuals trying to branch out into new fields, and in fact, some of history’s greatest entertainers have been proficient in more than one medium. Actors getting into music are no exception. Now sure, the majority of celebrity bands are pretty bad, but they’re having fun and doing what they enjoy so it’s not really fair to make fun of them. But there are some that look to be less about a love of music and more about trying to save a dying career, and these efforts deserve to be recognized for the abominations that they are.

Remember back in the 80s when Eddie Murphy was funny? Before his career tanked and he starred in crap like Beverly Hills Cop III and The Adventures of Pluto Nash? OK, so he’s been in a few decent movies lately (along with a lot of bad ones), but in-between his initial success and his comeback he released three albums. 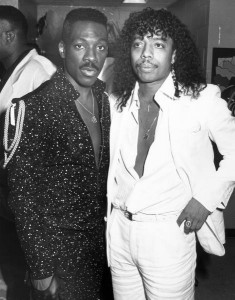 The first, How Could It Be, came out in 1985, and sold well despite awful reviews. It’s big single was “Party All The Time,” which featured Rick James. So that’s aged well. There’s nothing technically wrong with the song, but it’s so silly and outdated that there’s no reason anyone would want to listen to it today. That won’t stop us from embedding it here though…

Murphy followed that effort up with So Happy in 1989, which received the same awful reviews but none of the commercial success. Finally, there was Love’s Alright, which somehow managed to bomb even worse. The painfully named single “Whatzupwitu,” featuring a past his prime Michael Jackson, was flat-out terrible, although the video is so silly that it’s actually pretty amazing. So after three complete failures, Murphy finally got the message and returned to film, and his musical efforts were promptly forgotten by everyone with good taste.

Shatner and Nimoy could team up to kill the President and history would still remember them exclusively for playing Kirk and Spock on Star Trek. As the series neared its end both of them branched out into music in an attempt to be recognised for something else, but despite their best efforts they couldn’t fend off the typecasting that the franchise tends to create.

Shatner released The Transformed Man in 1968, and its weird combination of spoken word songs and select passages for Shakespeare, all preformed without a hint of irony, was enough to ensure that this album consistently appears on lists of the worst releases of all time. It was also enough to put Shatner off of music until 2004, when the aptly named Has Been was released. This one actually got good reviews, because he didn’t take the whole thing so seriously. Nobody bought it though; he could release an album of epic guitar solos and the only song anyone would remember would still be his ridiculous rendition of “Rocket Man.”

As for Nimoy, he released no fewer than five albums between 1967 and 1970, including such timeless classics as The New World of Leonard Nimoy and the vaguely suggestive The Touch of Leonard Nimoy. They’re not very good, but that’s not the sad part. No, what’s really depressing is that despite putting out five albums worth of material Nimoy’s music is remembered for precisely one song: the incredibly bad “Ballad of Bilbo Baggins.” Words cannot describe how campy it is, so take a look for yourself.

Considering that Steven Seagal can barely talk, let alone sing, and that his favorite method of communication is punching dudes in the face, he’s probably not the first guy that comes to mind when you think of music. But he took a break from releasing endless direct-to-video movies about an ex-cop/ex-FBI agent/ex-CIA agent trying to rescue a family member/get revenge/foil generic evil plots in order to release two albums that are somehow even worse than all of his films. Songs from the Crystal Cave came out in 2005, while Mojo Priest was released the following year.

The first album covers everything from country music to Seagal’s rendition of the childhood favorite “Lollipop.” Building off of that incredible momentum, Mojo Priest received a full international tour. That’s right, Seagal traveled around the world to play his music, and people paid money to see him do it. As is typical with Seagal it’s tough to tell how seriously he takes his work, but no amount of irony can excuse the fact that he turned a profit by singing songs called “Alligator Ass” and “Talk to my Ass.” To be fair, he also has songs that aren’t about asses, but they make up a small portion of his repertoire.

Both albums got awful reviews and were ignored commercially, and it looks like Seagal has moved on from his attempt at music to make another dozen movies about kicking, um, ass. We will say this though; no matter how terrible his music was, he did produce what is arguably the greatest album cover ever. 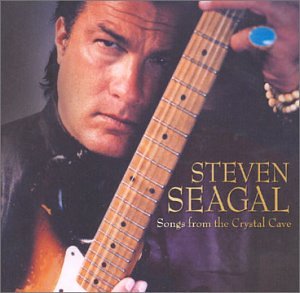 David Hasselhoff probably doesn’t want to be remembered only for making a career out of running along a beach in slow motion, so it’s perfectly understandable that he tried his hand at other endeavors. During his time at Baywatch he released no fewer than six albums, with several more coming out in recent years (including a Christmas album)! So if you’ve ever wanted to listen to David Hasselhoff cover classic tracks by Air Supply, the Beach Boys and Elvis, well, you’ve got a lot of options. And of course, there are plenty of original tracks as well. Who wouldn’t want to listen to “Flying on the Wings of Tenderness”? 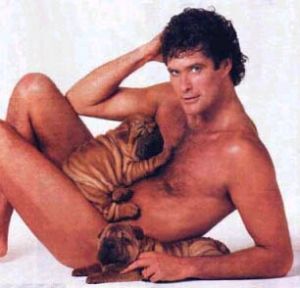 We assume this is what flying on the wings of tenderness looks like.

Considering how large his discography is you would assume that Hasselhoff isn’t a completely terrible musician. After all, somebody must be funding these albums, and nobody would pony up for failure after failure, right? Well, that theory sort of falls through when you discover that these albums were apparently made on a budget of four dollars for studio equipment and a case of beer to bribe a university student to produce the music videos.

Hasselhoff’s music videos are infamous for how bad they are, and their non-existent production values are a testament to the effort that goes into his music. Behold this incredibly awful song set to a mix of old TV show clips and shots of Hasselhoff standing around!

Disturbingly, “Looking for Freedom” was a number one hit in Germany back in 1989. Although that may just be because Germans saw the video and equated freedom with cars jumping over and/or crashing into things and decided that would be a sweet way to take down the Berlin Wall.

We think most of you will be surprised to hear that Corey Feldman is still alive, let alone that he’s released four albums since 1994. Evidence that these albums exist is hard to come across, (just like evidence that his career still exists, are we right?) but thanks to Feldman’s official website, which appears to be stuck in 1995, we can tell you everything you need to know.

His most recent effort, 2008’s Technology Analogy features a baffling tribute to the Biblical figure Ezekiel, a testament to windy days, a song about how his dad never loved him, and a track that critiques the Internet. Powerful stuff. Powerful, random, stuff. Go back further into the archives and you’ll find classic songs like “What Is A Dog?”, “Oh God!” and “Is This Cool?” No Corey, it’s not. 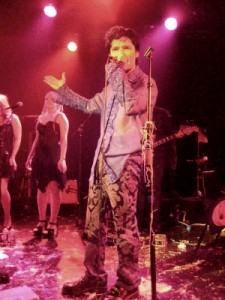 Neither are your pants.

Unfortunately, the actual songs are tough to find online. Sure, there are plenty of people who will meticulously upload pictures and videos of obscure and irrelevant actors, but even in a place as vast as the Internet it’s tough to find someone who really gives a shit about poor Corey Feldman’s music. But don’t despair, because a few scattered fragments exist; not enough to give you the full Corey experience, but more than enough to make it clear that such an experience is something which should be avoided at all costs.

That’s right, a woman who has become more famous than most of you reading this ever will be, solely by being a complete bitch, has entered the music world. Where is your God now?

In 2010, Montag released the very appropriately named Superficial, although she’s been dabbling in music since 2008. She claimed the title was a pun, because deep down she’s actually a complex and beautiful human being. Then you listen to the album and hear lines like “come and eat my panties off of me” and “girls say I’m conceited cause they really want to be me.” Nice try, Heidi. 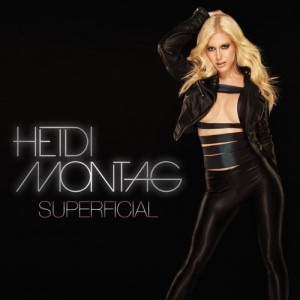 Also, what the hell does “I wear diamonds for breakfast” mean? Maybe she meant to say pearls.

Unsurprisingly, the album bombed, as critics ripped into it and nobody bought it. That’s almost literal; only 658 copies sold in its first week, and presumably half of them were intended as gag gifts. One listen to its title track should explain why; generic pop beat aside, good luck resisting the urge to punch your monitor when you hear the lyrics.

OK, so it shouldn’t come as a shock that a pop album by some flash in the pan TV celebrity turned out to be a piece of crap that the world ignored, but that’s not what’s really sad about this. What’s sad is that this monstrosity was allowed to exist in the first place. Superficial purportedly cost nearly 2 million dollars to create, and all of that money came straight from Montag’s pocket.

Somehow we’ve reached the point where a person with no discernible talents other than the ability to be annoying was able to raise enough money to fund a professionally done vanity project and inflict its horrors upon the world. Sure, we can laugh it off because it failed on such an incredible scale, but the precedent it’s helping to set is monstrous. And that’s even sadder than Montag thinking she can create good music.