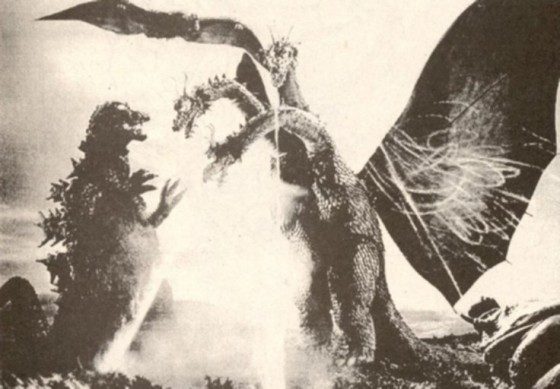 Woah! Movie Monsters! Oh HELL yeah! I love me some movie monsters! There isn’t a movie out there that could not be made that much better by the inclusion of a movie monster or two. Titanic? Damn straight! A capsizing ship tossing victims to the sea like so many toy dolls is one thing, but mix in the creature from, say, Deep Star 6 and you’ve got something! At least then that whiny bitch, Leo De-Crappy-O could have perished a little more sweetly than just freezing to death. Pussy. Gone With The Wind? Oh you know that massive mansion fire on the plantation was caused by Mecha-Godzilla! Well, I do love monsters, but I also had to put up a few stipulations to this collection or else I’d be amassing fifty of them, and that’s just too big. So here you will see ‘creatures’ as a general term. This does, however, not include Vampires, Aliens, or Lycanthropes. Nor does this list include slashers and murderers as ‘creatures’, except in one instance you’ll see later… but this instance is also a monster, not just a killer. So, with that, here are the sixteen coolest Movie Monsters of all time.

On their way home to Seattle from a hunting trip, the Hendersons accidentally run over a strange and unknown creature. Unsure what else to do, they strap it to the roof of their car and take it home. Once there, the revived creature goes wild, rampaging throughout the house. Eventually, the family realizes that the creature is the legendary Bigfoot, and is actually very gentle. Given the name “Harry”, the creature’s curiosity leads him to escape, running through the city as sightings of him strike fear into the populace (and greed into the heart of one French Canadian). Trying to hide Harry from the Seattle authorities and the hunter who wants his hide, the Hendersons come to realize that the best thing for Harry is to return him to his home in the wilderness. *SOB* So sad…

Swamp Thing is a fictional character (as opposed to those real, lumbering plant-people), and according to the good folks at Wikipedia: ‘a plant elemental published by DC Comics He first appeared in House of Secrets #92 (July 1971), and was created by Len Wein and Berni Wrightson. The character is a humanoid mass of vegetable matter who fights to protect his swamp home, the environment in general, and humanity from various supernatural or terrorist threats.’ The movie, starring the voluptuous Adrienne Barbeau was just about as funny as it was kick ass and inundated HBO back in the early eighties.

Created as an opponent for Godzilla, Wikipedia says, ‘Ghidorah (Ghidra) is a golden dragon-like monster with two legs, three heads on long necks, bat-like wings, and two tails. It was said to be 100 meters tall with a 150-meter wingspan and to weigh nearly 30,000 metric tons. King Ghidorah was brought to life on the movie screen by a stunt actor inside an elaborate three-piece costume, with a team of puppeteers to control the beast’s many appendages. Its alarming shrieks — a different ringing pitch for each of its heads — are among the genre’s most recognizable sound effects.’ Yeah, he kicks ass.

Wikipedia says: ‘The Creeper is an ancient demonic creature, usually dressed in long, tattered duster and face-concealing cowboy hat. In the first film, he also wears heavy boots. In the sequel he appears barefoot, revealing slightly bird-like talons which he uses to pick up his victims. The Creeper has mottled green and brown skin, and a pair of wing-like mandibles or skin flaps are located on each side of his face. He also has a huge pair of bat-like wings on his back, which fold up tightly enough that they are completely unnoticeable underneath his coat. The Creeper drives an old truck with a license plate that reads BEATNGU, which is first interpreted as “beating you,” but later read as “be eating you” in the first movie.’ That’s cool.

Graboids are depicted as subterranean animals, and as Wikipedia informs us: ‘superficially resembling gigantic worms with long, serpentine bodies. When fully grown, a mature graboid will measure up to 30 feet long, and 6 feet across at their widest point, and weigh 10-20 tons. Graboids completely lack eyes; they don’t need them, thanks to underground life. Their heads consist of a massive, black, armored beak, which is used to push aside the dirt as it digs. The beak opens up like a grotesque flower; it consists of a wide upper jaw, a thinner lower jaw, and a pair of hooked mandibles on either side. Whether they possess a skeleton or not is unknown, though a faux scientific document written by the SciFi channel hypotheses they have a semi-rigid internal structure, similar to the internal workings of a cuttlefish. Graboids have a trio of long, powerful, serpent-like tentacles, which are prehensile and have a reach of at least ten feet.’

From the Wikipedia entry, ‘The Gill-man is fully amphibious capable of breathing both in and out of the water. As shown in the first film, it is vulnerable to Rotenone. The Gill-man’s scaly skin is extremely tough, which combined with a fast acting healing factor, allows it to survive wounds which would be fatal to humans, such as gunshots and full immolation. As shown in the third film, the creature’s body will automatically develop lungs should its gills be irreparably damaged.’

Another of Godzilla’s rogues gallery, Wikipedia says: ‘Rodan’s primary weapons are his speed and agility; he can create hurricane-force winds in his wake by flying at supersonic speeds at low altitude. He also uses his beak and talons effectively in battle, the former being depicted as sharp enough to smash through rocks, and his wings despite their delicate appearance, are quite durable. Rodan possesses great physical strength, able to lift and carry monsters heavier than himself, as seen in Invasion of Astro-Monster, when he was shown to lift Godzilla high into the air, and knock King Ghidorah to the ground in a mid-air collision. He also could emit a blast of wind from his mouth in the 1956 movie, but this concept was never used again.’ Too bad, it was really cool.

When Dr. Frankenstein decided he needed to prove the theory that he could re-animate deceased human flesh, his collection of body parts and a less-than perfect brain proved to be a formidable beast indeed. Never truly angry, only easily upset, the monster eventually escaped the castle and set out on his own only to discover gentleness and the frailty of human life in a little blind girl, and the inherent disgust of anything unknown by man as a whole. Never scary, but always grotesque, Frankenstein’s Monster learned more valuable lessons as a living-dead than he would have anytime alive.

Wikipedia tells us what we all already know: ‘Balrogs were tall, menacing humanoid beings, with the ability to shroud themselves in fire, darkness, and shadow. They frequently appeared armed with fiery whips of many thongs. In Tolkien’s later conception, they could not be casually destroyed: significant power was required. Only dragons rivaled their capacity for ferocity and destruction, and during the First Age they were among the most feared of Morgoth’s forces.’ “Thou shall not pass!”

When told by Gozer that any thought, any idea, any picture in the mind would ultimately prove the destruction of the Ghostbusters, Peter yells for everyone to clear his mind and not to think of anything. Leave it to Peter to nearly bring on the downfall of the entire city with one innocent thought. The rest is history.

The gigantic ape-like simian from Skull Island was, stupidly, brought to the States to make the discoverers money and fame. But, as most ridiculous schemes go, this one ended with a monster on the loose bashing buildings and whacking planes out of the sky. Despite his massive size and cinder-block like intelligence, Kong was ultimately defeated and felled by a woman. Nice metaphor, there, huh?

Well Wikipedia sure says it best: “Mothra has proven a formidable adversary in combat: in larval form she may use her silken spray to wrap and immobilize an opponent, and has a knack for biting and clinging to foes’ tails. In imago form her powers vary widely from film to film, including very animalistic scratching and dragging, incorporating several bolt and beam weapons in the ‘Heisei Era’, and often concluding with a poisonous yellow powder (or “scales”) —her last defense. Mothra is one of the most powerful psychics in the Toho universe. She has had the ability to use this power benevolently, to communicate with humans, or defensively, to destroy her enemies. As suggested earlier, Mothra is assumed to be divine and draws many parallels to the Phoenix, which makes her one of the more powerful kaiju of the Toho universe. Mothra has become one of Godzilla’s most challenging opponents, having achieved the greatest success rate in battle of any of his foes.”

Gamera’s size rivals that of his famous Japanese counterpart, Godzilla. And I’ll leave the rest to Wikipedia: ‘Unlike any other species of giant turtle (ha ha), Gamera has the habit of walking upright on two legs rather than on all fours, though he occasionally walked ‘normally’ in his first three films. Gamera was capable of using his upper limbs in the same manner as Godzilla, as his forelegs had appendages much closer in construction to hands than feet, and was capable of grappling with opponents and manipulating objects. His mouth was filled with teeth, which no species of turtle has had since prehistoric times (so it’s got that realism going for it), with a pair of large tusks protruding upward from his lower jaw. Gamera is also usually seen with very large human-like eyes, adding intelligence to his overall appearance.’ Oh, and he had rockets. From his shell. So cool.

Scarcely fully seen even when it was coming at the poor camera man head-on, the Cloverfield Monster evidently emerged from the Hudson bay off of New York city, beheading the Statue of Liberty on its way in. If its grotesque and unstoppable appearance weren’t bad enough, it had little ‘barnacle’ type organisms all over its hide that sprung loose and quickly attacked and killed as many hapless humans as they could. It was large enough to swipe down the side of a building with one crab-like arm and powerful enough to withstand military firepower. It was a shambling mess of malformed bits and pieces and had almost as complete a conscience. That is to say, very little.

Released from his underwater cage by Neptune under the orders of Zeus, the Kraken was as fierce as monsters come. His arrival alone cause a massive tidal wave to flood the land, and then he was there on a mission of complete mayhem and obliteration. Fortunately, Perseus and his trusty steed, Pegasus -along with the assistance of one tinny, golden owl- used the severed head of Medusa to turn the beast to stone thereby shattering his delusions of grandeur and sending him, in pieces, back to his watery tomb.

The unmatched king of the monsters, Wikipedia says, ‘Godzilla’s appearance has changed over the years, but many of his characteristics have remained constant. His roar has remained the same, only changing in pitch, as has his approximate appearance: a giant, mutant dinosaur with rough, bumpy charcoal gray scales, a long powerful tail, and jagged, bone colored dorsal fins. Godzilla’s iconic character design is a blended chimera inspired by various prehistoric reptiles, gleaned from children’s dinosaur books and illustrations from an issue of Life magazine: Godzilla has the head and lower body of a Tyrannosaurus, a triple row of dorsal plates reminiscent of a Stegosaurus, the neck and forearms of Iguanodon and the tail and skin texture of a crocodile.’ Sounds like a far deadlier version of Pete’s Dragon.