The Sixteen Most Ambiguous Cartoon Characters 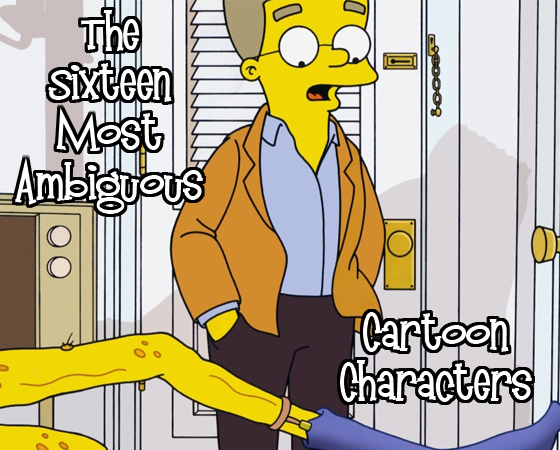 Cartoons have been around for a real long time. Their appeal is universal and many of their appearances are legendary. But if there’s one thing most cartoons have tried very hard to achieve — at least those from the ’60s and early ’70s — it’s that women were women and men were men, and never the two shall mingle. Yeah, well, this stopped being an issue over time and soon we became party to slightly more ambiguous characters. Men were getting effeminate voices, ladies were acting a sight more butch, and some even went as far as dressing similar to the opposing sex.

Let’s take for instance, Fred, from Scooby-Doo. Sadly, this cat could easily go either way. On one side of the coin, he clearly has feelings for Daphne and no one’s really sure what the two of them do when Shaggy and Scooby are off causing mayhem and Velma’s glasses are, again, broken. Yet, on the flip side, Fred wears an Ascot/neckerchief and has never actually been seen actively cozying up to either Daphne or Velma, be it for a kiss or otherwise. But, I think we can safely assume, natty dress or not, that Fred is most likely a man. Ah, but there are many others. Check them out and see if you agree.

Much akin to their rodent brethren, Chip and Dale, Mac and Tosh — the Goofy Gophers — spent all their time together more or less protecting their tree and the ground on which it grew. They were quite obviously both male, and even more apparently, without a significant other of the opposite sex, which left companionship to be found from each other. Not that there’s anything wrong with that. Let’s take a look at the evidence.

A lanky, naive school teacher with a ribboned, braided pony tail. Sure, he was created by Washington Irving back in the 1700s, but that’s no excuse not to man him up a bit. In the Johnny Depp-led version, Crane is a bit more of a guy’s guy, but he’s certainly just as nervous and really weird. However, in the Disney cartoon, Old Ichabod seems more like a fem fella who’d just as soon wear the nightgown of his ‘girlfriend’ to bed than take her. Take a look.

The classic Disney/Pixar film, A Bug’s Life, featured a bevy of insects valiantly attempting to protect their ant colony from the evil Hopper. One of the more stand out performances came from a green caterpillar that arrived to assist as part of a traveling circus. Heimlich had a high-pitched German-esque accent and a super effeminate way of doing just about everything. He was almost hedonistic when it came to his love for food, and eventually turned into an equally lady-like butterfly. Need I say more?

As Mr. Burns’ right hand man, Waylon Smithers is privileged enough to be very close to the one dude he really loves. Though it took years for Smithers to out and out admit that he prefers the company of men — specifically Monty Burns — it was painfully obvious long before that. He is shy, introverted, and typically the yang to Burns’ ying. However, the bitch can bite and it was proven at least once that Waylon has a dark side. Here he is.

Cashing in on the popularity of Jaws and I don’t know, Curly from The Three Stooges, comes Jabberjaw. He’s a whiny, irritating, anthropomorphic shark who also happens to be a part of a band… with people. Yeah, one of Hanna-Barbera’s rules was they didn’t have to make a whole lot of sense. Anyway, Jabber was about as useful as you’d think he’d be for a big, bumbling shark. Also, I’m pretty sure he’d rather eat boys… if you know what I mean.

Bobbed Dorthy Hamill hair cut? Check. Pink tunic and lavender tights? Double check. Using his ‘sword’ to turn into a refugee from The Village People? Triple check. Oh yeah, Prince Adam is a pretty boy, alright. And it certainly doesn’t help matters any watching him transform into a Zardoz-looking, Bandolier-wearing fruit pie glistening in the sun. This dude is a poster child for “Don’t Ask, Don’t Tell.” Yes, I know this video is a mock, but Adam sounds and acts just like that. You know it.

It’s sometimes tough to tell if Stewart Gilligan Griffin is intentionally trying to dupe us into believing he’s playing for the other team, or if it’s just a byproduct of his English accent and less than stellar upbringing. Either way, many clues –some far more obvious than others — point to little one-year-old Stewie walking the short track to wine spritzers and toaster cozies. Check it out.

Here we have another Disney classic proving once again that Old Walt had some serious issues, and likely a closet full of ballerina outfits. This time it features a cowardly lion (no, not that one) who lives with sheep. He wants to protect them but is totally scared stupid of the wolf on the hunt. So, rather than grow a manly set and devour the damn thing, Lambert cowers and weeps like a sissy. Until it matters. Then he’ll scratch your eyes out, bitch! Watch!

In Smurf Village, every Smurf is pretty much named after what it is he does. For instance, Handy Smurf is good at giving hand jobs… no wait, he’s handy — like with tools. Jokey Smurf creates practical jokes, and Painter Smurf… well, you get the idea. Now, aside from the only original female, Smurfette, there is one in the tribe who spends far too much time primping, fawning and admiring himself in his mirror. And that’s Vanity. He might as well have a pair of panties and a tutu. Check it out.

Much like her crime caper fighting cohort, Fred, it remained vaguely unclear as to which teeter Velma tottered. She showed many signs of just being an intellectual introvert, but she also seemed to show little interest in either Fred or Daphne… or Shaggy, for that matter. She was pretty, in a dumpy schoolmarm sort of way, but she always had that coy glint in her glazed eye that neither betrayed her true feelings nor covered up any real truths. But, since we here at Gunaxin think girl on girl is pretty sexy, we’re gonna assume that Velma Dinkley scissored some Daphne daffodil, if you know what I mean. Jinkies, I guess this video makes me stand… corrected?

Imagine, for a second, if one of the most annoying Stooges of all time took a turn at voice-over acting and played the roll of a seriously ambiguous genie character in a Hanna-Barbera cartoon. Yeah, this shit ain’t your imagination. It really happened and the Stooge to which I refer was Joe Besser. The show was called Jeannie and featured a pretty hot, but incredibly inept jinn and her ‘Master’, Corey Anders. But neither of these toons stole the spotlight. Oh no. That was left up to the acres-over the top performance of Babu, the portly genie whose mere appearance brought on trouble. Enjoy a clip.

The argument can be made that Patty had a crush on ‘Chuck’ Brown, as she more than once demonstrated in the cartoon specials. But everyone thinks it was more of a coming-of-age passing phase. I mean really, was there much to Charlie Brown other than a featureless, bald dope? Not really. Besides, anywhere Patty went, Marcie was in tow and she, without a shadow of a doubt, was listening to Melissa Ethridge. Patty remains slightly on the cusp. She could have been a hippy chick, I guess. I’m not buying it. See for yourself.

Arriving at the tail end of The Flintstones, Gazoo was an outcast alien from space who took it upon himself to assist Fred and Barney whenever he felt it necessary. Too bad neither of them ever did. Gazoo was an irritant of the highest degree and even made our list of When Good Cartoons Go Bad. But just one of the guys he wasn’t. Unless you mean from a race of space beings that are all male, and mate by reach-arounds, then I’d guess you’d be closer to the truth. Get a load of this guy.

South Park is chock full of characters who have proclaimed themselves gay. Of course there is Big Gay Al, and Nancy Hanson… but perhaps the most striking transformation from effeminate teacher to overtly queer transsexual has got to be Mr. Garrison. Over the course of the show, he’s gone from slightly over the top to flaming, and back again. He was also a woman. Yeah, South Park is a wacky town.

Being a pedophile is one thing, but being a blatantly gay pedophile is just a stunning achievement. Mr. Herbert is the Griffin’s decrepit old neighbor who lives alone with his dog that happens to look just like him. But that’s not the point. The point is he has the hots for Chris, the teenage Griffin boy who, himself, is so incredibly clueless that he basically eggs Mr. Herbert on. As funny as it is — and it is very funny — it’s also pretty sick. But funny. Don’t forget that. Check him out.