Media > Television > The Smurfs Are Communist

The Smurfs Are Communist 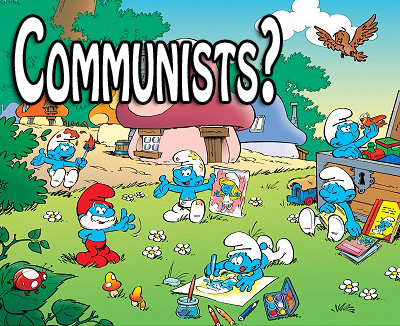 The Smurfs live in a commune. They share everything they own. No Salesman Smurf, no Consumer Smurf. Each Smurf has a job, and does only that job. No Career Change Smurf, no Unemployed Smurf or Welfare Recipient Smurf. No Smurf owned property or tried to profit. These are traits of socialism, people!

The most popular Smurfs: Hefty, the KGB soldier, and Handy, the hardest worker in the village who doesn’t earn any more than the others. The Smurfs portrayed in negative light: The useless Greedy, the obvious homosexual Vanity, and Brainy (who was clearly modeled after Leon Trotsky… the resemblances speak for themselves. How many times did Brainy get kicked out of the colony?).

Then there is the villain, Gargamel, who wants nothing more than to turn the Smurfs into gold. Greedy capitalist, and a criminal, at that. Let’s not ignore that he is an anti-Semetic caricature of a Jew. Big nose, hunched over, greedy… (but they forgot to draw his kippah)… And let’s not forget his cat named Azrael, which sounds strangely similar to Israel, but actually means angel of death. Jews were persecuted under Stalin’s rule, in case you didn’t know.

In a society of hundreds of male Smurfs, there is only one female – Smurfette. Forget Communism, folks, that’s 1984-style persecution. Then there’s this theory… Smurfs is an acronym. Could it be… Socialist Men Under Red Father?

Let’s face it… the Smurfs are exactly what Communism, in theory, should be, and it was on full display for us kids during the Cold War of the 1980s.

One last thing to drive the point home… The un-elected Papa Smurf, with his Karl Marx beard, wore red. COMMIE!