Motors > Spectacular Cars of Film and Television : A History

Spectacular Cars of Film and Television : A History 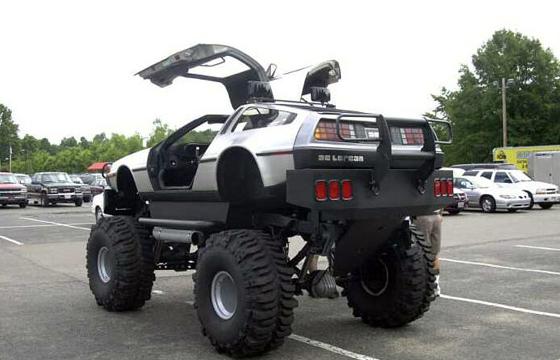 Cars are used for lots of things. They can be used for transport, to settle differences, or in special cases even good conversation. Men have always loved their cars, and it is only natural that this passion would transition into television and Hollywood. These automotive celebrities have given great performances, and prove that sometimes character is born of more than flesh and bone. Their drivers are ballsy, talented, or incredibly lucky, but they handle the machinery with the skill of a practiced lover, complete with a mess left on the pavement afterwards. It is this mastery that has earned the respect of film-goers for decades, providing a vivid history of four-wheeled majesty.

The 1940s – When Drag Racing Settled Everything

1946 Ford Super De Luxe
Rebel Without a Cause

James Dean is a timeless icon that died tragically before his time, and although he has not made a great amount of films, many of his most famous sequences are commonly referenced in film and television even today. The chicken scene in Rebel Without a Cause is particularly powerful since Dean himself died in a car crash right before the film was released. The man added a pair of balls to this chick-flick narrative, and the attitude still feels authentic. It’s too bad that some of Marlon Brando’s similar performances have since been tainted by the knowledge that he becomes a crazy obese shut-in, while Dean’s hold up.

A musical about summer loving? Sounds like it has as much testosterone as a Gilmore Girls marathon. Thankfully, the greaser characters butch up the film a bit with their rowdy womanizing and utter disregard for the dangers of racing and tobacco. Greased Lightning, the subject of the only song in the movie that isn’t about feelings, is also an integral part of the film’s climactic race scene. That is, unless you think that carnival part is the climax, which is a valid opinion since the foreign girl ends up in quite the sexy outfit.

Most television shows have low points and high points, like a roller coaster. 1960s Batman was all peak, all the time. The acting, the dialogue, the “pow” effects, the Bat-devices, The Joker with a mustache, and of course the Batmobile, were all so delightfully over the top that no one would take Batman seriously again for decades. While Adam West’s signature car looked more like “The Homer” than the sleek penis design that the 1989 film utilized, it suited the tone of the show perfectly.

In a movie with great lines, great performances, and special effects which date it horribly, it is amazing that people have such a strong connection to the Ecto-1 with its minimal screen time. This is probably because the only sequence involving the car occurs with the signature song featured in the background. This, or the fact that the Ghostbusters drive in what appears to be a cross between an ambulance and a hearse, a combination so ridiculously fitting that even Shakespeare would give it a respectful tip of the hat.

Bullitt, a cop who plays by his own rules and happens to have the hardest name in cop movie history. Bullitt, played by the only man with enough testosterone to handle the role: Steve McQueen. Bullitt, the movie that set the bar for filming car chases in movies so high, that even 40 years later people use it as a measuring stick for vehicular achievements. Bullitt, proving that as long as the chase is awesome enough, no one will care if a car loses more than four hubcaps.

1969 Dodge Charger – The General Lee
The Dukes of Hazzard

Somehow a show with a horrible premise, lame characters, and no plot variation, became a landmark in television history. It makes sense that when looked at years later, the only aspect that was respected in the slightest was the General Lee. Daisy’s short-shorts were admired yes, but it’s hard to respect something that exists solely to ride up an ass…yeee-haw.

The 1970s – When Battle Scars Were Mandatory

The original Gone in 60 Seconds is a very special movie. The cars are real, the stunts are real, the acting is terrible, but no one cares because it ends with a 34 minute car chase, one of the most memorable in film history. Most of the cars featured were owned (and during the process of filming, destroyed) by the writer/director/producer/star H. B. Halicki. The man wrecks 93 cars in this 96 minute film (0.97 cars per minute). While this may not seem amazing, John Rambo only kills 0.72 people per minute in First Blood Part II. The 2000 The Cage remake had some cool moments, but lost much of the authenticity and sheer carnage which made the original so special. Nicholas Cage: master of the tainted remake/adaptation/accent/marriage.

The Blues Brothers, at the time it came out, held the record for most car crashes in a single movie. The movie had everything going for it: an amazing cast, great dialogue, fantastic music, impeccable car sequences, a living John Belushi, and even a skinny Dan Aykroyd. In what other movie can you see an ex-police car drive through a mall wreaking havoc, two hilarious actors playing off each other perfectly, and Nazi’s getting messed with worse than Yosemite Sam?

Gull-wing doors? Check. The ability to fly at the flip of a switch? Check. Time travel? Check and mate. These movies are so fantastic that they managed to make DeLoreans cool. In a world where Back to the Future never exists, in an evil alternate timeline as it were, the DeLorean would be remembered as nothing more than a symbol of unrelenting douch-ery. Thankfully, we live in the universe where Doc was not only able to make a time machine out of a DeLorean, but able to make one out of the shattered remains of a DeLorean and a train. That’s heavy.

KITT (Knight Industries Two-Thousand) has the appearance of a car, the durability of a tank, the speed of the Flash, and the soothing voice of Mr. Feeny. The show is the story of a loner, who may or may not exist but has great theme music none the less, that operates outside the law in order to take down criminals who similarly conduct their business outside of the influence of the authorities. Knight Rider is notable for being the coolest show ever, despite having a premise that impossible to explain without sounding like a complete jackass. “David Hasselhoff and his indestructible talking car drive around solving mysteries, and occasionally even fight evil cars that are also indestructible. No seriously, it doesn’t suck.”

Jason Statham has the unique ability of being convincing at doing the impossible. If he wants to take on a group of ten guys, it’s believable. In Crank, where he should have died of a heart attack several times before the movie was over, he not only survived everything that was thrown at him, but did it at terminal velocity. If Jason Statham feels like pretending to be an international driver, one with amazing talent and cars tuned precisely for each job, few would try to stop him and even fewer would succeed. This is why The Transporter franchise works, because if anyone can pull of being a better wheelman than Jesus, it’s him. Anytime Jason Statham is involved, it’s better to blindly believe rather than question him and potentially feel his wrath.

John Frankenheimer sat down one day and decided to make a movie. It would be about a group of hired guns after a mysterious briefcase, with tons of betrayal clogging up what should be a straightforward heist. It’s never revealed what’s in the case, but no one cares because since the car chases are so damn entertaining. The cars are showcased how they should be, calling back to the chases of cinema past with minimal CGI and sequences filmed at actual speeds. Ronin is a nostalgic throwback: a celebration of the car movies of old, of DeNiro movies of old, and Jean Reno movies before the Pink Panther remake. *Sigh*, better days.

The 2000s – When Style Took Over For Character

Will Smith has provided a lot of entertaining action dialogue (Independence Day). Michael Bay has made some great action movies (The Rock). Martin Lawrence used to make movies that were actually funny (… well, Blue Streak was at least watchable). Bad Boys II may not be a perfect movie, but it succeeds in bringing talented individuals together for a project that plays to their specific abilities. While the original Bad Boys had some decent car sequences, nothing will come close to the chases in Bad Boys II. Instead of aiming for the realism that most of the other films from this list strive for, Michael Bay has thrown any semblance authenticity out of the window. The car chase integrated a boat for Christ’s sakes, doesn’t matter how fake the whole thing is that is amazing.

Christopher Nolan’s Batman franchise pretends to root itself in realism, but has enough reckless action movie decisions to feel like it stars Arnold. This time out the gate, Batman has traded in his penis-mobile for a one man demolition machine, and he takes it for a drive through the city with no regard for collateral damage as any good superhero would do. When everything goes to hell in Gotham it is only the Tumbler, the realistic but still tank-like version of the Batmobile, that can restore the balance. That or tear shit down callously. When you base a character off of the recurring premise: “fuck you, I’m amazing”, his car has to be the most no holds barred device in existence.

1958 Plymouth Fury – Christine – Up there with KARR as one of the best automotive antagonists in media history.

1964 Aston Martin DB5 – Goldfinger – The most iconic car handled by James Bond, which means a lot since he’s seen more rides than tail.

1976 Ford Gran Torino – Starsky and Hutch – They were drifting before it became cool.