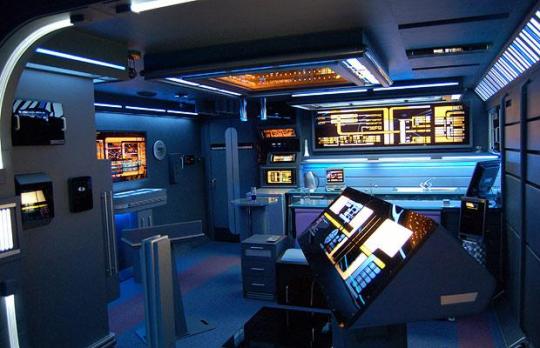 Have you ever considered converting your apartment or home into the set from a movie? Well, if you had, I am sure the Star Trek set would have been tops of your list, you just lack vision:

After his wife left him, Tony Alleyne set out to create the ultimate bachelor pad, painstakingly turning his flat into a Star Trek set. He started the project in 1999 and completed it in 2004, but then decided to give the flat a Star Trek: Voyager make-over…  The 500-square-foot apartment features voice-activated lighting, LED lighting, running lights, air-conditioning – but no bed.  A few years ago Mr Alleyne suffered from sciatica and was advised by his GP to sleep on the floor. “It cured the sciatica and gave me the opportunity to convert the bed area into the Transporter area,” he says. “Bed space is overrated”

For more on the apartment that is certain to make the girls drop their panties, head on over to Film Drunk.