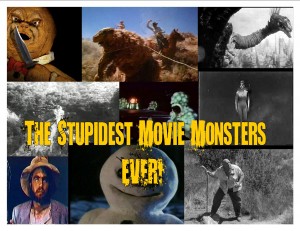 In the land of movie monsters there are creatures of epic proportions. The creatures from the Alien series. The Predator. Freddy Krueger. Hell, even The Blob is pretty cool for a glob of whatever it was.Yeah, this concerns the bottom of the barrel monster. The ones that are just horrid. So, in no particular order I present some pretty dumb beasties.

This one sounded so cool. A beast from a parallel dimension that can swoop through the skies at supersonic speeds. And he loved eating the little pilots of planes after he knocked them from the skies. The makers of this movie were smart to not show the monster right away and after they did maybe he should have been a mystery. Looking like a cross between a vulture and a demented turkey in the film it appears that they built this grotesque creature and hung him on a fishing pole to get the effect of him flying.
Yeah, it’s pathetic. 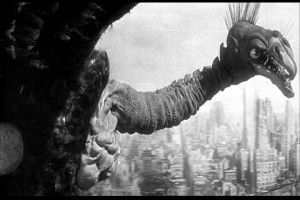 While the film has a little atmosphere because of its swamp location, the titular monsters ruin any chance of this being a good monster movie. Apparently, the people playing the leeches were told to make their own costumes. This ends up with creatures that look like a glorified hefty bag. I’m surprised no one drowned in the making of this flick. 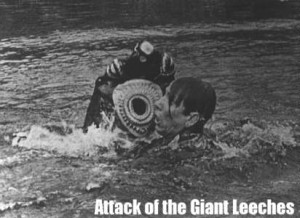 How could you lose? The voice of Gary Busey in a giant gingerbread man who goes around slaughtering people. I’m afraid that this demented knock off of the Pillsbury Dough Boy was neither frightening or effective. To add insult to injury, check out the poster for the sequel 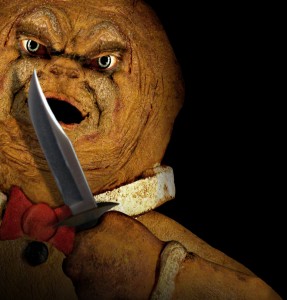 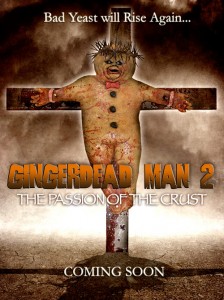 The Astounding She Monster

A curvy woman with too much eye makeup slinking around the woods doesn’t really come across as astounding or much of a monster. Sure, if she touches you, you’re toast, but still not much of a monster. And why would you send a being that kills anything it touches as an emissary of peace? To make it worse there is a film called The She Creature that actually has a pretty cool monster in it. Grab the wrong DVD and you get this. 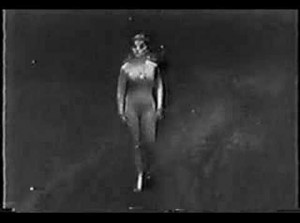 Ah, Torgo! Bane of Mystery Science Theater 3000 and film watchers everywhere. He’s supposed to be a goat man who we never get to see in goat form. It just makes him look like he’s trying out for Monty Python’s Ministry of Silly Walking. Poor Torgo. 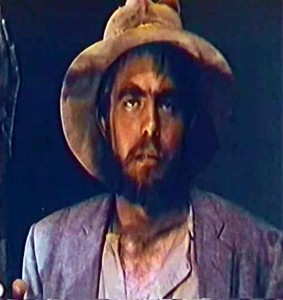 That is one impressive name, isn’t it? I mean it’s the GODMONSTER for crying out loud. Yeah, it’s a mutant sheep. Not cool mutant sheep like in the horror flick Black Sheep. More like a pathetic, overstuffed, demented version of an upright sheep that anyone could outrun. Even your great grandmother in a walker with an oxygen tank could outrun this thing. It still kills a lot of people. 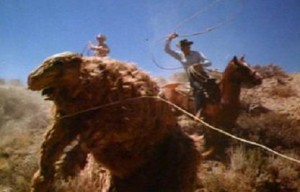 There is this wonderful, old, corny science fiction film called Invasion Of The Saucermen. The monsters are all these little guys with creepy over-sized heads and freaky hands that can un-attach from the body if it gets killed. It’s a good movie with a great little monster in it. Then there’s this one. Director Larry Buchanan remade the original and his creatures were covered in foam eyeballs. They looked like a murderous form of The Michelin Man and some of the monsters didn’t even have a full suit because of budget restraints. They just wore the head and a black body stocking. 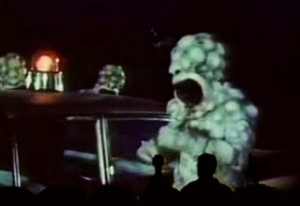 No, not the Michael Keaton turned snowman flick. This is a mutant snowman who kills everyone with bad puns and various snowman related objects. Yes, some one gets it with a carrot. Not good. The suit looks like it was made of that white stuff you wrap around the base of your Christmas tree. And they made a sequel. Really? Not enough unanswered snowman killer questions from the first flick? Really? 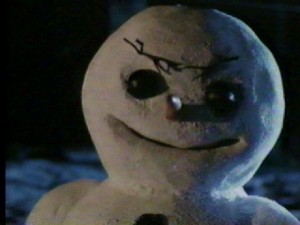 Made by a whole community this beastie looks like one of the folks that owned the local carpet store donated a bunch of remnants to the cause and they stitched them together, shoved fourteen or fifteen people under the thing and sent it out to terrorize mankind. Yeah, you can see people’s legs and stuff in the movie. Even the victims have to help out by shoving themselves into the creature’s maw. Apparently The Creeping Terror is incapable of feeding itself. Pathetic. 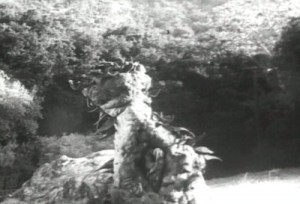 The Beast From Yucca Flats

This film requires you to swallow two things. One, that ex wrestler Tor Johnson is a scientist and two, that a man who could barely walk by the time he made this flick was a menacing monster capable of chasing his victims down. Nope, not buying it and the minimal makeup makes you think they weren’t even trying. 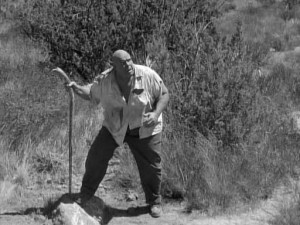 A Killer Chair From The Original Dr. Who

From the original series, I will let this video clip speak for itself;