Grub > Food > The Tale of the Cereal Killer

The Tale of the Cereal Killer 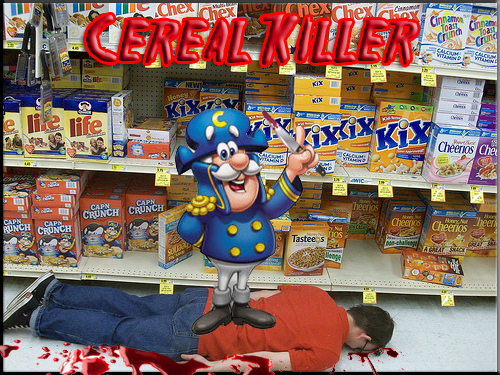 There has been a murder in a faraway kingdom. For those with a weak heart or stomach….I beg you not to go any further. This is a tale about a Cap’n and a King. For years the seaman and lord have been living in harmony. One ruled the sea and the other the land. Each man had a great deal of respect for one another. The Cap’n had most of the limelight, yet the King didn’t mind not being popular since he was a folk legend to those who knew him.

Recently people have been noticing a change in the Cap’n. One time when he was in a port checking out the ladies in the area, a man said “Hello Captain!” Without delay, the Cap’n punched the man right in the eye and yelled, “It’s CAP’N….not Captain! Let me never catch you again in this port or your life will end!” Bystanders could not believe the anger that came from the Cap’n.

Others have seen the Cap’n wear an all black uniform instead of his traditional blue suit. When he wore the black outfit he seemed to be more angry. It was just like when Spider-Man wore his black costume…..the power that was in that suit was too much for one man. The Cap’n didn’t care, he loved the rage that was building inside him. When he wore the black suit, it almost seemed he was looking for trouble. No one knew what turned the jolly man into an angry pirate. 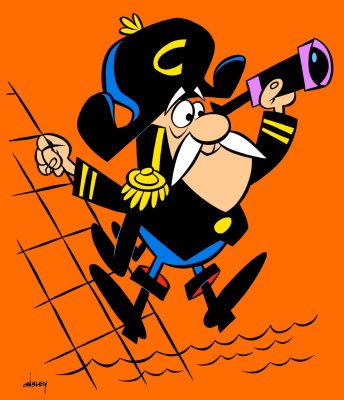 As more stories were pouring in of how the Cap’n was abusive and mean, the King started to take notice.  The Queen begged him to not mess with the Cap’n. She told her husband that she didn’t want to see  him and the Cap’n end up like Tupac and Biggie. The King took the words of his lady to heart, but he knew he had to take action. He wanted to speak to the Cap’n and see if he could talk some sense into “The Crunch Man” (King Vitaman’s nickname for Cap’n).

Soon the King met up with the Cap’n and he saw for himself how the ol’ sea dog had changed. On this fateful night some have said that it turned out to be the last day for the King on this cereal aisle we call Earth. From an account of a lady who was present when the two met, this is what she remembers of how it went down.

“Don’t call me that anymore…that name has no meaning to me now. What do you want?” quipped the Cap’n.

“Well I heard that you have been making a name for yourself recently and the stories I hear aren’t that great. Does this have anything to do with the FDA and White House trying to ban your cereal? Cuz word on the street is that won’t happen.”

“Damn right it won’t happen……I’ll make sure that no one will mess with me. Not even you Vitz”

“Whoa….man take it easy….I just wanted to see if you were OK. That’s all!”

“Sure Vitz, I’m more then OK, I’m grrrrrreat. I have seen the world for what it is. It is cut throat….even in our industry. Sad news for you man…cuz your days are in the bargain bin. The world will have a new cereal in the Cap’n line…..yours! I’m taking your kingdom over.”

Unfortunately that is was the last time anyone has heard from King Vitaman. No one knows for sure what happened that night, but it is strange that a new cereal has come from the Cap’n line which is eerily similar to King Vitaman’s cereal. I did some research, buying a box of Cap’n Crunch Treasures, and they taste exactly like King Vitaman. I reached out to Quaker for comment on what happened to the King, but they refused the invite for an interview.

Think I am just a conspiracy theorist? Well tell me what happened to cereals like Quisp, another corn crunch cereal from Quaker? You be the judge. Below I have the box of both cereals, with an odd similarity. There is blood in the water and the killer is one Horatio Magellan Crunch! 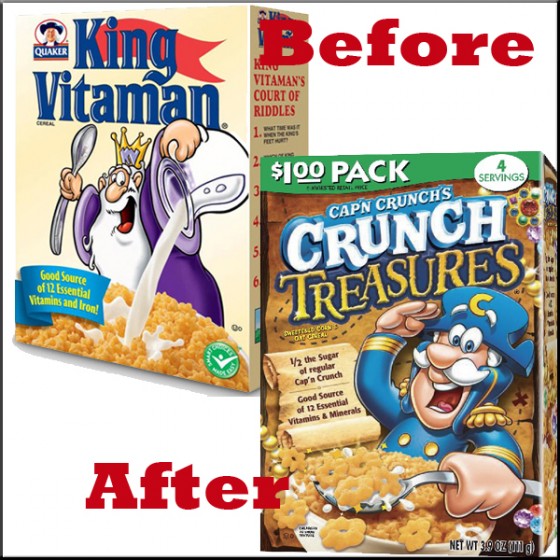