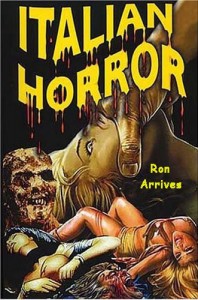 Italian horror? Really? Is this something relevant and even scary? Hell. Yes. Italian directors of horror movies rank among the top greatest horror directors over all… yeah, that was a bit odd. Here: In the upper echelon of Horror Film Directors, Italians offer up some of the finest in that genre of movies. In fact, check out our list of The Thirteen Most Influential Horror Movie Directors and you’ll find that three of them are of the Italian descent.

If you are as big a horror freak as I am, these names and the movies they did so well should come as no real surprise. These films are so solid and long-standing that their very existence has influenced so much of the American horror scene that we, as said Americans, often take for granted and assume (incorrectly) are our own. So in honor of Columbus Day (a celebration of all things Italian), and Halloween coming a bit later this month, we were inspired to put together this list of ten pieces of scary Italian horror :

Though Fulci had been making smaller movies for years previous, the American success of Dawn of the Dead gave many in the genre a wide open door to shove out their own gruesome zombie fair. In fact, this movie is often considered the ‘unofficial sequel’ to Romero’s Dawn, though taking place on an island hit with a ghost ship rife with a plague. Oh, and if you’ve never seen a shark fight a zombie (and you haven’t unless you’ve seen this) now’s a good time.

9) Lisa and the Devil (or House of Exorcism)

An amazing horror entry at one end of the spectrum, while at the other, a silly romp chock full of wacky non-sequiturs and severely off-kilter moments. The amazing Telly Savalas (chomping his trademark lolly pop) plays a Demonic servant to a well-to-do Aristocratic ghost family who are only encountered by a woman straying from a Fresco-viewing tour group. Bizarre? Damn right. But don’t feel bad. As it turns out, everyone is dead anyway, so none of tis nonsense matters. Or are they?

Bava is the creator and mastermind behind the Giallo style of horror film making. It’s Gialli in Italian and it describes the ‘yellow’ look of the original pulps. Anyway, in this nasty little piece of film, there are more plot twists, set-piece transformations, loose sexual politics, and swift story adjustments than a good Shyamalan flick- so much so that it might be a bit much to even follow. But do, and you’ll be in for a wonderful surprise. Oh, and a chilling Ennio Morricone soundtrack to boot.

I’ve said this before on our 25 Creepiest Horror Movie Posters, and I’m nearly required to say it again: this movie is a sick, twisted mess. Basically, four Americans head out to a remote section of rain forest called the ‘green inferno’ to document stories of cannibalism. Well, let’s just say that months later, their film stock is found by another crew and it’s all what we see. So, so very much. This is a precursor to The Blair Witch Project and, obviously, miles better.

Yes sir, Fulci again. In fact, don’t be too surprised if you see a few repeated directors here. They know the craft. Here we have a bit of change in the typical horror mold where the protagonists are often a group of innocent women; in this case it focuses on a crew of seemingly innocuous boys in a little, sleepy Italian village. A witch, as well, appears and is -as is always the case- accused of a recent rash of occurrences and is promptly killed. However, it’s not that simple. Soon we begin to see the twist -as it were- and it’s damn near impossible to deny.

A poor concert pianist sees the brutal murder of a German clairvoyant. Yes, it’s as odd as it sounds, but so very satisfying and by far one of Argento’s finest. The pianist is certain he alone holds a piece to the puzzle of why and, possibly, who is responsible for the killing and finds himself drawn to the scene of the crime. Fortunately for the audience (assuming we’re paying attention) the identity of the murderer is shown immediately… ah, but if you missed it. The scene with the ‘house of the screaming child’ is especially disturbing.

Assuming you enjoy the works of H.P. Lovecraft and even, to some extent here, Stephen King, well then you just might love this little gem. Basically, a psychotic and warped turn-of-the-century painter accidentally opens the gates of Hell and promptly gets beaten to death. Lovely. What follows is a tryst of zombie nightmares and an Armageddon-fueled descent into Hell itself. Damn gruesome. Unfortunately, one misgiving is the blitz of incongruous dialog. Oh well, we can’t all be perfect.

3) Spirits of the Dead

Though sadly only just under an hour long, this short shock is absolutely one of Italian horrors lost masterpieces. A washed-up actor turns to Italian cinema to star in a piece that might just kick-start his flailing career. Yet, even as he finds comfort in what could be, he falls prey to the lust, power, and underground terrors that already haunt him. Perhaps the most unsettling scene is when our would-be hero attempts to flee his demonic pursuers only to get lost in his own fears.

This movie is an all-out assault on the senses. Argento tapped an as-yet unexplored nerve in horror with this barrage of haunting colors, lighting, mind-warping, and stunning visuals. This movie has ties to a witch cult, true enough, but the rather tenuous script deals with the heroine attempting to flee her demons in more ways than one. The true scary point, in fact doubtless where filmmakers of J.K. Rowling’s books draw homage, is the haunted school where nothing is ever constant and magic cloaks completely.

Justly considered the ‘Godfather of Italian Gothic’ horror spreading his cinematic wealth to such film franchises as Friday the 13th and Scream, Bava’s Kill Baby… Kill is easily his very best. A ghost story through and through, and surprisingly light on the buckets of blood that Bava’s previous offerings spill, this movie relies far heavier on surreal and ethereal atmospheres that spook rather than stab. Here we find the protagonist not only circling in a chase after himself, but walking into the realization that he, too, is… yeah, you’ll just have to see for yourself.