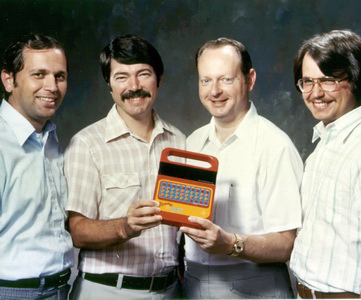 If you grew up when I did (late 70’s, 80’s), and were lucky enough to have one of the early Atari incarnations, or even one of the more prehistoric computer systems (I’m looking at you, Commodore 64), well, then you were a rarer breed indeed. I, on the other hand, didn’t get my first computer until I was 10, in 1984, and yes, it was good old C-64… but I didn’t have a video game system of my own until a NES. Look, the point I am trying to make here is we had to make fun with whatever was around or handy, even boring old board games we’d play over and over. And sometimes, we had to invent our own types of excitement with paper, or plastic cups, or fire crackers and the neighbor kid’s pants… but I digress. We still managed to have fun with whatever we did, and that even carried over into our adolescent lives and early adulthood. So, after a good bit of scouring around the web, I managed to come across some of those fun and often self-destructive activities alive and well on line. Each one of these is an emulator and does a great job of, well, emulating the original game. Oh, and the best part: they’re FREE! Have fun killing a day with some of your old childhood memories! 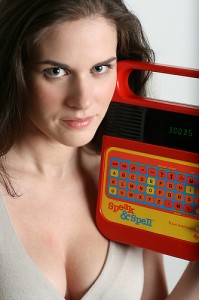 “You are right! Now try “Rohypnol”.

Man, who didn’t have one of these kick-ass ‘learning’ toys? I had a few over my life time and despite the fact that I was being educated by proxy, I just loved hearing that synthesized and horribly spooky voice alerting me of my foibles and worthlessness. Click the link above for a really interesting history on the toy, and then click HERE to wander back in time. Be ready to kill a few hours. 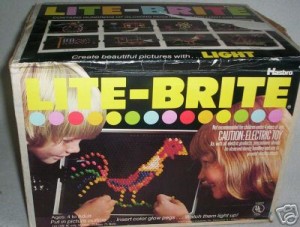 She made a cock. She’s filthy!

Damn, I had no idea this toy came out in 1967! So, basically, children were creating odd, slightly askew, forced-linear, non-elliptical designs for nearly 50 years? Oh, and they lit up, too? Sweet. I do remember fondly the first one I got came with a ton of really cool stencils like ponies, a nature scene, and Superman and Darth Vader! So cool. Anyway, there’s a link up there to see the story of this childhood favorite, or, go HERE to play around on your own! 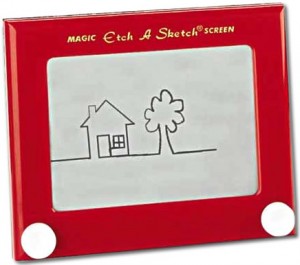 Yeah, it’s okay. But it was supposed to be an elephant.

With accolades such as “Being Around Since the 50’s” and “Voted a Top 100 Toy of All Time”, is it any wonder the Etch A Sketch holds such a warm place in everyone’s collective hearts? I honestly don’t think I’ve met an American human who didn’t grow up with one of these at his or her disposal. As intriguing as they were frustrating (making circles was an exercise in futility), at least you could always shake away your mistakes. Click above for the info, or HERE to enjoy as much as you did back then. 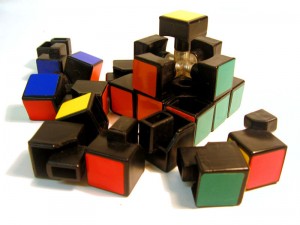 As we got a little older, so went the challenge of our toys. Things like Bedbugs and Hi-Ho Cherry-O were put on the shelves to solemnly collect dust while we moved on to things like the infuriating and finger-numbing Rubik’s Cube. Introduced to the unwary public the year yours truly was born (’74), the puzzle was an instant hit… even for those too lazy to solve, but far too lonely not to do a little dis-assembly. HERE‘s an on-line version that’s just as sinister. 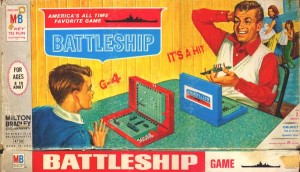 Let’s play ‘Name everything socially and ethically wrong with this picture’!

Was any other board game quite as vicious and vindictive as Battleship? If you were anything like me, you’d secretly rearrange your fleet while your unsuspecting brother was ducked behind his radar. Yeah, I was kind of an ass. He’d be all shooting ‘misses’ all over the place, stupidly guarding his poorly-clustered formation as I bombed the shit out of him. Ah, memories. Anyway, play it HERE or read about it up there! 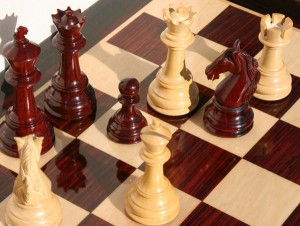 Maybe you, too, were a closet intellectual and joined perhaps one of the most ‘get-your-ass-kicked-repeatedly’ clubs available in school. Maybe you, too, were a sad, sorry individual who’s only friends were school morons and social outcasts who’s only reprieves from the daily barrage of name-calling and wedgies was the comfort of Chess Club. Where’s my gun. I’m kidding, I’m kidding… calm down. Yeah, I was a chess nerd, but I was big kid who carried brass knuckles! Anyway, play some chess HERE. Just be careful, you never know where the bullies are. 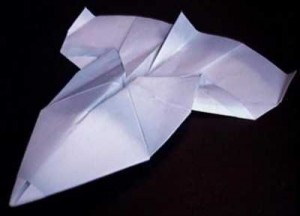 And then there were those days; whiling away the droning, endless minutes in Social Studies class listening in a half-daze to your monotonous teacher babble on and on about the Louisiana Purchase when you just had to find something to do before you finally gave into a full-on REM sleep. And then you discovered the Origami-esque art of making paper airplanes. If you were really lucky, you could launch one from the back of the room all the way to the teacher’s eyeball. Play with paper HERE, and dig some history up there. 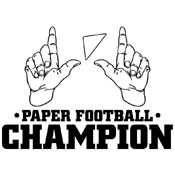 I remember first playing this awesome game in detention. Hey, I got into my share of trouble, too! I guess that dude eying my girlfriend will have to breathe out of his ass now. Okay. Detention was for being an idiot in class. Happy now? You’ve broken me. Anyway this is another in the vast art of paper craft where you basically fold a piece of paper like a ceremonial flag and then launch it via flicking it at your partner’s goal post-fingers. Hours of fun! HERE‘s the game! 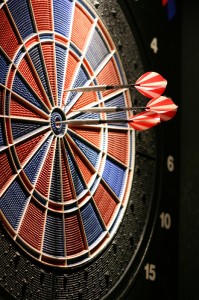 Soon, you got a bit older and took to hanging out with the older kids at local bars. Your life was a shambles, your family was openly ashamed of you, and your future looked murky and riddled with potential gang gunfire. But, you lived for the moment, began sipping beer when the bar owner wasn’t looking, and hit on anything with boobs as you attempted to win over the women with your newly-discovered dart throwing prowess. You headed down a dark path, buddy. Relive your cool pre-adulthood HERE. 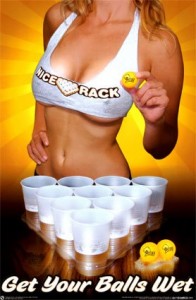 There is absolutely nothing bad about any part of this picture.

Finally, after a series of missteps and a few run-ins with the law (remember that weekend in County with that Australian transvestite named Moon-Cow?), you found your way into college. Education, though, be damned: you were the life of the Frat parties and rapidly rose in the ranks as the premiere Beer Pong player! You’re going places, kid! Oh, Moon-Cow called, he/she wants to play you HERE. Maybe you should run.