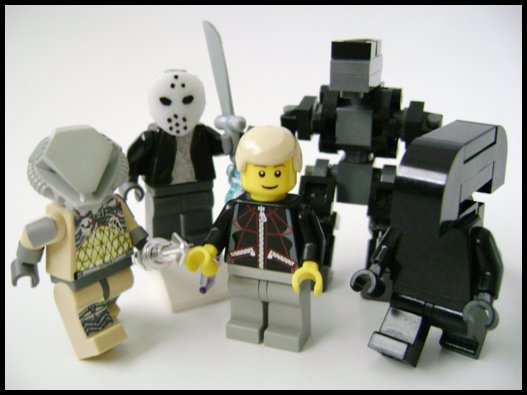 Few things in this world seen on the big screen can compare to the absolute thrills and chills of the Horror Movie. Where else can you feel cold shivers arc down your spine while witnessing some deranged, screwed-up homicidal maniac slaughtering a crew of innocent bystanders… well, aside from the 6-o’clock news I mean? Yeah, nowhere, that’s the answer I was getting at. So it only stands to reason that any attempt to copy said terror can either fall on one side or the other of the proverbial cinematic Sword of Damocles. How about absurdly acted and painfully viewed amateur reenactments done in a high school kid’s basement? Generally rather shitty. What about costumed farm animals performing a rendition of Sleep-A-Way Camp in the meadow? I’d watch that. But, perhaps the most awesome way to show homage to the horror movie is to animate it… with LEGO. Yeah, now that, folks, kicks ass. Now sit back, grab a building set of your favorite Space Ship blocks, and watch ten of our favorite Stop-Motion LEGO Horror parodies.

This one makes use of Regan’s (Linda Blair) actual hideous voice from the movie. You can follow the You Tube links to the actual ‘movie’ of this, I was unfortunately unable to embed it.

This one is done by one guy doing all the voices. I especially like Quinn’s accent here. As you can see, the kid knows his literature. And the homemade shark is a very nice touch.

This homage to the Clive Barker classic is very well done for how short it is. The hand-crafted Cenobites are a very nice touch, as well.

Yes, the high-pitched voices are pretty irritating, and the make-shift vehicles are a little shoddy, but what it lacks in those departments, it more than makes up for in the fantastic creature effects.

I like the gritty feel that matches the ‘grindhouse’ style of the film. The van is a nice touch, and so is the splattered kitty. I hate cats.

Once again the creator uses actual voices from the movie, a practice I think is far better than trying to emulate them. This one has a great printed mini-mask of Jigsaw, too.

Though this one strays from the film a bit, and is pretty well flooded with recorded screams and silly, unnecessary jump-cuts, I really do like what the creator did with this. Yeah, it’s not Jason’s mask, but the original burlap sack-come-LEGO knight’s helmet is pretty funny.

This is an homage to the remake that came out a few years ago and uses recorded dialog from the same. For some odd reason, LEGO has either not released an African American head, or this guy just didn’t have one on hand, as you’ll see. The mustaches and the Priest are classic.

These all seem to be a combination of both the Carpenter classic and the Zombie, um, not so classic, but what the author does, he does really well and manages to actually scare you (well, you know) a few times. Very nicely done, indeed.