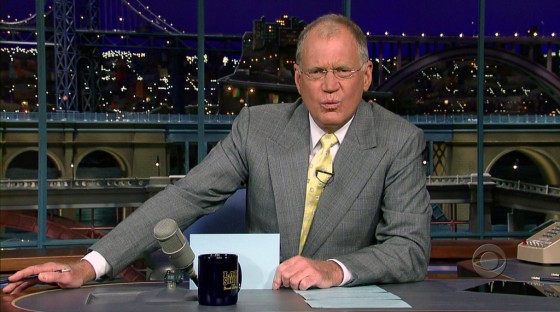 Love him or hate him, there’s no denying that when it comes to outright dickery, David Letterman absolutely takes the entire cake. He’s smarmy, grouchy, and ever so condescending… and that’s when he’s being nice to people! (Rim-shot) Often times just having guests on just to belittle them and rub their foibles in their collective faces, David Letterman takes no prisoners when interviewing his panel. And even when his interviewees are either less than stellar, or else a bit too expressive, David rolls with the punches and dishes out his riffs without batting an eyelash. Never giving in to those who feel his methods are crude and distasteful, Letterman adheres to his own rules and, to this day, remains easily the funniest Late Night host of all time.

Lately, as most of you know, Dave has come forth amid threats from a journalist to the tune of millions of dollars and admitted that he’s had sexual relations with certain members of his former staff. And even among this backlash and slander, Letterman has still managed to stand tall, hold his head as high as possible, and retain his awesome sense of humor. Here are ten of his finest moments with video evidence as well as a few recent clips from his heart-on-his-sleeve moments.

Watching Dave do battle with the rambling incoherent Harvey Pekar is a bit like watching a lion stalk a dying gazelle. It’s kinda uncomfortable.

Everyone knows that Crispin Glover is bat-shit insane, and this clip just stands to completely reinforce that fact. You know it’s on a downhill slide when the crowd and Paul dive into the fray.

David, right here, is at his classic trying-not-to-say-too-much best as Salma describes a prayer she made for her, um, assets.

First she drops a few F-bombs, then she eggs Dave on to smell her panties, and that’s just in the first three minutes. This, folks, is a train wreck.

I’d just like to be David Letterman for one day. Just one. If only for occasions like this.

But not because of occasions like this. Shit, speaking of train wrecks: this is nightmare fodder for sure.

A lot of things have been said about Ozzy regarding his drug-addled brain and suffering speech impediments, and we all saw him stumble over just about everything during his M-TV show and various other appearances, but this clip from back in the ’80’s is just a mess.

From the moment Dave attempts to get Andy to admit to Jerry that an apology is in order, to the next moment when Jerry vehemently denies it, this clip is a maelstrom of discomfort.

Paris Hilton is, quite possibly, the most annoying and irritating human being that has ever walked on two legs. Dave simply calls her on it.

Is Joaquin acting? Is this all an elaborate ruse? It really doesn’t matter, Dave is not putting up with his shit.