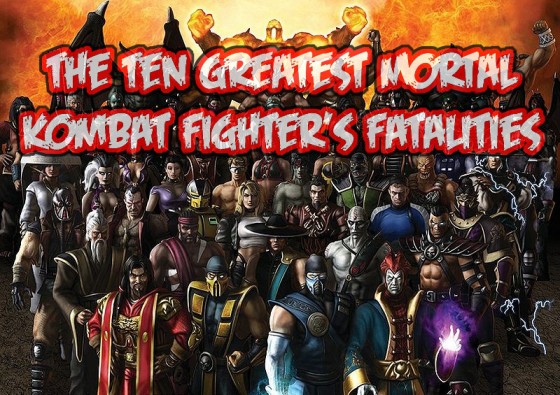 Remember the first time you saw Mortal Kombat at the arcade? Remember how stunningly realistic it looked? Remember the reaction you had to that very first Fatality you saw? The fountains of blood, the rivers of gore? Yeah, you remember. Then, eventually, it was ported to the home systems and at first, uh… no blood? What was the point of punching off someone’s head or watching them explode if there was no geysers of body fluid to go with it? Well, luckily for SEGA owners, like myself, there was a code: ABACABB… and then there was blood. However, if you owned a Super Nintendo (also like me), no soup for you!

Well, times have changed and the bloodiness factor has increased tenfold, as have the elaborate Fatalities that cause it. The systems have gotten more advanced and the graphics far superior. But Mortal Kombat remains the same at its very core. What follows is a list of Fatalities largely considered to be the coolest int he games. Granted, not every one of each of these characters is a masterpiece, but most are. So sit back and watch the blood flow.

Sometimes the Wiki entry is so short, there’s no point in trying to condense it. So here it is: “Dairou was once a highly respected Seidan guardsman, much like Hotaru, but he is imprisoned when he kills the man who he was led to believe murdered his family. He eventually escapes from prison during a riot caused by the resistance led by Darrius. After escaping, he no longer follows the Seiden law and becomes a mercenary. In Deception’s Konquest mode, Dairou is hired to free Shujinko from prison. In the present, he has been hired by Darrius to steal the constitution of Seido and to kill Hotaru. It is unknown if Dairou really did kill Hotaru, but both returned in Armageddon.” Since his rap sheet is fairly short, his Fatality list is only a few moves strong. But it’s the use of his infamous ‘ribs in the eyes’ that lands him on this list.

Not surprisingly, Jax’s background and continuing story line is about as convoluted as you could get. Though, at heart, it’s a story of a military man sent on a mission with Sonja Blade to bring a fugitive to justice. Only with a lot more stuff. You can read it HERE. His fatalities center around the fact that his arms are (or were) bionically enhanced and super strong, or cybernetic in their entirety. For a while he just pretty much punched your head off, but soon he got a touch more twisted and began tossing in curb stomps and various embarrassing bodily explosions.

Scorpion is, for the most part, a zombie or a revenant. His soul purpose in returning from the dead is to find those responsible for the death of his family. Even after their failed return (as living dead), Scorpion sends minions to track down Quan Chi who has since absconded with his son. Scorpions Fatalities are nearly all based on his ability to control Hell fire. He can breathe it, create fire balls, and even call flaming hands from the depths of Netherworld, all of which typically end in his opponent burning to ashes, exploding, or bursting into flames.

Like Liu Kang, Kung Lao is a monk. He is, in fact, only the second such character to receive that moniker and made his appearance in MK II. In fact, according to MK lore, Kung Lao, like his Shaolin brother, Liu Kang, is a direct descendant of the Great Kung Lao who was killed by Goro, thereby make Shang Tsung the new ruler of the tournament. Since Kung was not directly created until MK II, it is said he decried the original competition because he feared the consequences. Kung’s mastery and use of his blade-brimmed hat, and his preference of wind attacks, are not only the bases for his moves, but also those of his Fatalities which transform the hat into a saw blade, and something akin to a stabbing instrument.

Yet another long-winded story in the MK timeline, at it’s core it tells of Mileena being a malevolent creation of Shang Tsung used in an attempt to destroy her human counterpart, Princess Kitana. Mileena is a direct duplicate in ever facet except for the fact that the lower half of her face is demonic and horrible. This difference goes a long way in her many Fatalities, many of which make use of the removal of her veil or mask and something terrible occurring.

Kabal was one of many characters to swap alliances transferring from evil to good in this case. He has gone through a few redesigns and costume additions and subtractions thanks mostly to his constant need to be revived by some kind of life support. But don’t let that fool you into assuming he isn’t a big bag of butt kicking. With his hook-swords, his Fatalities are some of the most brutal in the game, up to and including one in particular where he golf-swings the victim into literal cold cuts.

Basically, Quan Chi is a sorcerer, and like all evil sorcerers, longs to wield the ultimate power. He is also a conniving trickster and has managed to talk his way out of death several times. His major battle saw his hands defeat many of Earthrealm’s guardians including Raiden and Liu Kang. But it was his ultimate destruction of the elemental, Blaze that has yet to bestow upon him that great power he so longs for. His Fatalities make use of his sorcerer powers and include many different forms such as acid spitting, laser eyes, and legs-scissor bifurcating.

Though Reptile began his run as a mere color-swap of Sub-Zero, he eventually went on to become far more reptilian in nature. His finishing moves (at least earlier on when he still wore a mask) each branched from the removal of his head gear and sometimes his flesh in order to reveal his horrible, lizard visage. He would then either devour your skull, use his tongue to rip your head off, or, later, vomit acid on you or leap on your body and gnaw on your face.

Liu Kang is considered to be the main video game protagonist by which most of the other Earthrealm characters link their desires to battle the opposing forces. His Fatalities are are pretty brutal and revolve around his central ability to transform into a towering dragon and consume the upper half of his victim’s body. Since MK1 (the original Arcade incarnation) Kang has been able to uppercut his target’s heads off. Sadly, in a more silly turn for the worse, he can also turn invisible and drop an Arcade game on the opposing players head, crushing them.

Sub-Zero (the name of two fighters throughout the series) are descendants of a race of warriors conveniently called Cryomancers; those with the ability to control ice and all its forms. Both Sub-Zeros have become a staple in the MK franchise, and with the exception of only one of the titles, have appeared in every one. When first introduced, his slide and freeze spray were add-ons to his moves list, but have since become regular and signatures. Thanks to the addition of a medallion he’s garnered, his moves list has vastly improved and now sits as one of the best in the game. Though he has many ice-based Fatalities, his most famous is the wrenching removal of the opponent’s skull and spine. In one instance, after icing the victim to a solidified statue, he rips your head off and shatters you with it.