Media > Celebrities > The Ten Most Surprising Deaths of 2009

The Ten Most Surprising Deaths of 2009 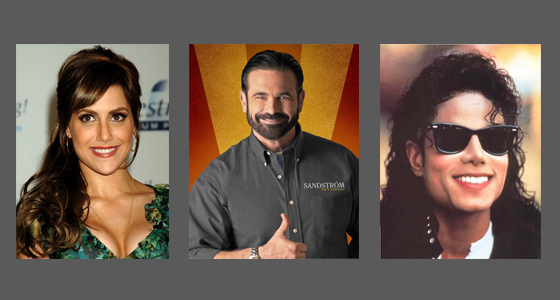 2009 was no different than any other year when it came to shocking and still-heavily-talked about deaths. In fact, so many famous faces shuffled this mortal coil over the last year that it is rather difficult -perhaps more so than in the past- to pick out the ten that truly defined ’09. Celebrities and personalities alike would seemingly just do something amazing or widely viewed, and then just as suddenly leave this land of the living for more beautiful pastures. So, let’s take a minute and remember those who may have been taken from us just a shade too soon… and possibly compare them with people who maybe should have been taken in their stead. See, to some, God has a plan, and sometimes His plan is just bizarre enough to really make us mortals wonder.

Really? Yeah, really. The most recent to be taken from us seemingly by her own, troubled hand, Brittany Murphy was an actress so instantly recognized and likable that it really didn’t matter that she hadn’t really gotten a big foothold in the industry. Sure, movies like Clueless, Girl Interrupted, and 8 Mile certainly brought her to the forefront of fame, as well as voicing the squirrelly Southern drawl of Luanne from King of the Hill, she hadn’t quite become the face that saturated the female ensemble casts like so many of her genre. Still, she will be missed if only for the potential she had yet to unleash.

Can We Trade For: How about Paris Hilton? She’s about as useful as a superfluous nipple, and just as grossly spoken of. She has little discernible talent, the prevailing style of an Heiress who’s just looking to be locked away, and the presence of a half-naked Skeletor. Is it too late to swap?

Everyone knows that Marilyn was a porn star. Her entire career is based on her appearance in the Hard-Core classic, Behind the Green Door and because of it, she went on to do several more films in the genre. Her portrayal of a woman who utters not a word in the movie, yet startles her audience for years to come by getting nailed by an African American gentleman. And so, as it were, a star was born. Her parents must have been so proud. But she left this Earth this past year in April when she was found by her daughter and it turned out that she’d died from heart disease-related issues.

A colorful and quite over-the-top wrestler from the original WWF, Capt. Lou ,throughout his 42-year career, guided 15 different tag teams and four singles competitors to championship gold. Now that’s something. He is also widely considered one of wrestling’s most important figures in terms of promoting the ‘sport’ from coast to coast. And above all else, he was in a cartoon called Hulk Hogan’s Rock ‘N’ Wrestling as well as several of Cindy Lauper’s videos! What a guy! Alas, he passed in his sleep in October. I guess that’s a better way to go than most wrestlers.

Can We Trade For: Vince McMahon? Look, the guy’s taken his company (well, his dad’s, really) to literally stratospheric levels of popularity and has made Wrestling a world-wide piece of sports entertainment. Yet, it’s pretty well known that he’s losing his damn mind. Let’s get some fresh blood in there already and put Vince to pasture.

Wen you’re taken by Cancer, it’s no laughing matter. Scientists can find ways to make people invisible, keep food fresher, and invent towels that absorb a million times their weight in water, but they can’t seem to get a grasp on Cancer. Anyway, Ron’s unfortunate death knell was esophageal cancer, one of the more painful types. Silver was best known for his scenes in such films as Reversal of Fortune, Blue Steel, and… Time Cop? Well, he’s well known anyway, regardless of his roles.

Can We Trade For: Alan Dershowitz, the lawyer/professor Ron played in Reversal of Fortune just for being Alan friggin’ Dershowitz? Please?

Who’s Arnold Stang, you’re likely asking yourselves. Well, I’ll tell you. Have you ever watched Top Cat? Well he was the voice of said feline. What about Honey Nut Cheerios? Well, before Billy West took over, Stang was the bee. What about Dennis the Menace the live-action film? Stang was the photographer who took a picture of George Wilson and his famous flower. Yeah, basically a character actor known for his lovable nerd character, Stang will never the less be missed.

Can We Trade For: Probably no one. Stang was, after all, 87. I guess not quite as surprising as others, really.

Regardless of how someone famous dies, it’s always a sad tragedy. Yet, when the death is completely avoidable, it just seems far worse. Case in point, Natasha Richardson. Daughter of Vanessa Redgrave and sister to Joely Richardson, as well as wife to Liam Neeson, Natasha was popular and famous enough even without having been a fine actress. But something so arbitrary as a fall suffered during a routine ski lesson leading to massive internal head injuries and later, death, is just so random and sick. See, God does have a sense of humor, we just don’t always get the punch-line.

Can We Trade For: Patty Hearst? Natasha portrayed her in the film of the same name and we all know Hearst’s rap sheet and less-than stellar history reads like a manual of what not to do in life. She could have left and far fewer people would have given a shit. Though, I suppose she’d have been more of a martyr. Oh well.

What can be said about an actor that hasn’t already been said. The man was a legend. His filmography looks like a lifetime’s worth of fantastic choices with only a few missteps (which is far more than most actors can boast) including Dirty Dancing, Ghost, Point Break, and Roadhouse. But Patrick was riddled with yet another form of the sinister Cancer, this time pancreatic. Swayze was a fighter both with his soul and his (wait for it) ‘soles’. Yeah, I went there.

Can We Trade For: Demi Moore? Not because I don’t like Swayze’s Ghost co-star, as I’m sure she’s a wonderful person, but anything to make that colossal douche bag Ashton Kutcher suffer is reason enough for me.

A man who could be -and likely is- selling robe bleach to the Lord, Billy Mays was so well known and saturating that you’d be hard pressed to see any ad on TV without seeing is face shilling the product. OxiClean, Awesome Auger, Big City Slider Station, Mighty Putty, and the Grater Plater… you know the products but would any have reached their astounding popularity without the voice and face of Mays? Nope.

Can We Trade For: Vince Shlomi. For obvious reasons.

Two words: Kung-Fu. For three years, Carradine played a half-Chinese, half-Caucasian Shaolin monk, Kwai Chang Caine who did little more than wander the Earth getting into adventures. But this was truly David’s claim to fame. He was even lucky enough to reprise his role in 1993 in The Legend Continues. Few people outside of the Hoff can claim that. But, and for the most part penultimately, Carradine rode the fame from his part in Tarrantino’s Kill Bill 1 and 2 as Bill himself. And then, going in a way I wish to die myself, David was found hanging from a closet after a failed attempt at autoerotic asphyxiation. Yeah, the dude tried to strangle himself while jerking off. Awesome.

Can We Trade For: Keith Carradine? David’s half -and far less talented- brother. Why? Why not? David was way cooler.

Who else could it possibly be, really. Just because I wasn’t a fan does nothing to take away from the unbelievable legacy this man (sort of) left for the world. Michael was an amazingly talented singer, son-writer, dancer, and, well, eccentric lunatic -but tat’s neither here nor there. His career spanned decades and left a lasting impression on so many different genres as well as on so many different people. He’ll be missed. Well, for the most part.

Can We Trade For: I know this is going to garner hate mail and a barrage of scathing comments, but, well, so be it. I think this suffering and insufferable nightmare is better off right where he is. Heaven? Maybe. Hell? Maybe. Either way his tortured, bizarre, and disconnected soul is far, far safer where ever it may be.