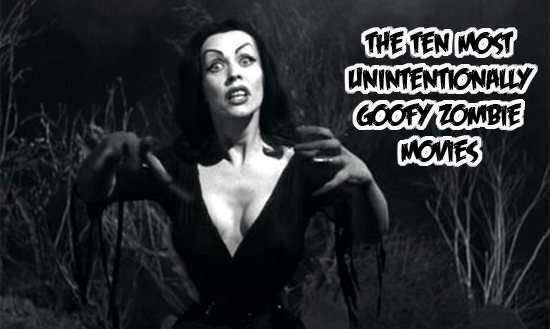 Ever since the very first zombie flick — arguably The Night of the Living Dead by George Romero — filmmakers from every skill level have attempted to cash in on the flesh-munching shambling deceased. Fortunately, about forty percent become watchable, decent films with new twists on the beaten horse and offer excitement mixed with gruesome gore. Conversely, the other sixty percent turn into re-hashed, derivative wastes of time and money with as much goofiness and vapid storylines as you can possibly stomach. Not to mention sub-par effects and shitty acting.

But there are differences between low budget and genuinely shitty. Low budget can still garner awesome flicks with zombie motifs that end up becoming classics (see again, Romero’s original masterpiece). Genuinely shitty, on the other hand, are often shitty not for the sake of being shitty, but unintentionally so just because the directors and actors really had no clear direction to take the film. Plot holes big enough to see through, lackluster performances soft enough to step on, and dialog cheesy enough to smother nachos are the earmarks of your unintentionally goofy movies. And these just happen to be of the zombie variety. Enjoy. Or don’t.

When literally all that your film has going for it are the names Tia Carrere and Adam West proudly emblazoned on the head of the title card, chances are pretty good you’ve made a pretty crummy flick. That isn’t to say that having Batman in your movie isn’t acres-worth of ass kicking — it is to say that having Adam West act like Batman acting like Adam West as Batman is pretty pathetic. As for Tia? More or less a background fixture who is the only one of the “bad guys” with any kind of Hollywood credit. In a word: scenery. The movie rolls out like any slice of horror fodder complete with a wacky voodoo priestess, rampant killings, and a zombified baseball playing teen. Painful.

Day of the Dead (Remake)

Whoever decided Mena Suvari could successfully carry a movie on her decidedly miniscule and child-like shoulders should have been immediately fired from his/her position and made head of parking at a local mime school. Worse yet is the fact that she’s heading the cast of a terrible remake that was a bad idea from the get go, much like prohibition or Jersey Shore. Her acting chops are nowhere near strong enough to anchor a flick whose main antagonists — animated corpses — continuously show more range and thespian-like ability. Building on the wake of the much better and far more successful Zack Snyder Dawn remake, Day, instead, takes the least exciting moments of its predecessors and turns them into a full blown somnambulist’s Thanksgiving.

At some point a vote was taken in an underground secret horror writer’s academy where, by a narrow margin, “Inept, Insipid Teens Stumble into Trouble and do Stupid Shit” won over the much more qualified “Any Other Plot Device Besides Inept, Insipid Teens.” And in doing so, the world of Horror was forever off balance on the cinematic see-saw right toward the mud puddle of shame on the playground of bad ideas. Here we have said teens breaking into a morgue and making off with a corpse as a daffy prank. Ha, get it? Anyway, said dead body regains consciousness and, oops, it’s a CHUD! And so the train derailment that is this sigh-inducing sequel is put into unstoppable motion. Oh, and the CHUD’s name is… of course, Bud.

So we’ve come to a zombie flick that completely hurdles unintentionally goofy and lands right into completely hilarious. Is this a spoof and/or comedy? You ask? No, and shut up. No one uses “and/or” in a spoken sentence. Anyway, though I wouldn’t typically recommend a movie that is just so embarrassing to watch (especially with friends), I have to say, you must go out, grab a few drinking buddies, and seek this shit-burger out. Have a few brews and simply revel in the inexcusable dialog, the store-bought elementary school art project masks, and the poor, poor attempt at scares that are so lousy and uninspired that sticking your dick in spinning fan blades offers higher degrees of terror. But hey, for sheer laugh-out-loud moments that really aren’t supposed to be funny… you could do worse.

City of the Living Dead

For full-on unnecessary gore, Lucio Fulci is still one of the masters of the craft. And even though this delicious pile of shit features scenes that literally ooze and run green with Lucio’s handiwork, (see the scene in which one of our heroines streams bloody tears and then literally vomits up her entire internal business before going ape-shit on her boyfriend’s tender cranial hemispheres) it is certainly not one of his best. To say the dialog is clunky is like saying Sanford’s truck is only kind of a piece of shit. Sadly, this movie runs out of steam the minute it begins bouncing through psychic plot lines and religious messages more WTF than you can possibly imagine. But, if you’re a Fulci fan (and I am) then I guess this is required viewing. Otherwise just seek out the aforementioned gore scene on YouTube and that ought to be good enough.

Edward Wood, Jr. In any other article that name alone would be all that was necessary to write this — some say his masterpiece — off as a goofy piece of cinematic tripe. Ah, but then there are those who are deeply in love with Ed’s work (and to whom I say good for you and to others I say go watch Johnny Depp in Ed Wood already) and feel this flawed tromp through bizarre town is something to behold. Either way, there is little argument that it is, indeed, a mess. First off, we all know that the vampiric master himself, Bela Lugosi died during production so the remainder of his scenes were distant shots, poorly cloaked faces, and shadowy visages. Tor Johnson — George “The Animal” Steele’s twin — plays Inspector Dan Clay, which is about as brilliant as casting George Clooney as Batman, and Vampira plays… wait for it, Vampire Girl. And if all that wasn’t enough, there is an alien plot to turn the Earth into zombies. No way I could make this shit up.

It’s never a great sign when your movie has any and all of the following alternative titles: Zombie Holocaust, Dr. Butcher Medical Deviate, Queen of the Cannibals, and Zombie 3. Seriously. So what happens in a movie that really has no business being anything but chock-full of win with “holocaust” in the title? Well, other than borrowing heavily (sometimes entire scenes) from far better zombie flicks, not a whole hell of a lot. It rambles and meanders through vapid dialog and hackneyed quips like a seasoned used-car salesman. The vellum-thin plot never manages to hang on one theme for more than a few seconds, making you ask yourself if the scene following isn’t actually from an entirely different film. Sure, the lead antagonist (no, not the zombies) is a whacked out neurosurgeon, but that doesn’t give this movie any more brains. Ha! See what I did there? I half expected — and would have greatly preferred — Jim Varney in the lead.

I realize I’m treading on thin ice with this one. For various reasons, Re-Animator has become a cult classic and I, for one, put all my assumptions in the scene where a dude’s severed head (David Gale) gives a woman (Barbara Crampton)… severed head. Also, Jefferey Combs is in it. Hurray! But even with the shimmering veneer, this is still a really stupid movie. Based incredibly loosely on a H.P Lovecraft story, Herbert West: Re-Animator, the flick follows West and his girlfriend as they get mixed up in some wacky shit involving green fluid and making dead tissue flicker and come alive like a stilted Boris Karloff with vengeance (and yes, acting) issues. Though Combs ultimately steals the show and manages to go on to become one of Horrordom’s most beloved leads — as well as two more Re-Animators — the flick just comes across as silly and woefully underperformed.

Guess who’s in this bizarre fetish-fest? If you said Rupert Everett, get off IMDb and quit spoiling it for everyone else. Yes, the cinematic genius (that is gravied with sarcasm, by the way. Oh, and I just invented the word “gravied.” You’re welcome.) Rupert Everett is our lead here, which somehow became a springboard to his future (see: current) career as a C-level actor taking roles in saccharine chick flicks. Basically, this movie was so uncomfortably effed up that Rupert turned into a closet homosexual just to get the bad taste of Hollywood dick out of his mouth, and, oddly, vice versa. Basically, Everett plays the guardian of a graveyard, all the while filling the slots and maintaining the grounds. Oh, right, I almost forgot… the dead rise as zombies! That’s an important part. So, Everett has to clobber them back into death. Okay, but let’s not forget the Italian title of this flick is Dellamorte Dellamore, which means love of the dead. There’s also loving in this… and it’s of the dead. Few things sit more uncomfortably with me.

Flight of the Living Dead

What a colossal piece of unflushable shit. This is a purely ham-fisted attempt to cash in on both the zombie craze and the “shit happening on a jet” craze with all the drawbacks of both and the benefits of neither. Confining the basic plot structure of Re-animator to the compressed space of a jet just wasn’t going to work no matter how much gore (not much) and hot bathroom sex (only slightly more) you cram into it. What we have here is a mad scientist aboard the jet with a corpse (sure) that’s chock-full of some kind of virus that may or may not result in rampaging zombies. Well, it does. And it also results in bullshit dialog (what else is new) and tongue-in-cheek acting that really wasn’t supposed to be tongue-in-cheek at all. And there ya go. Aches on a plane.