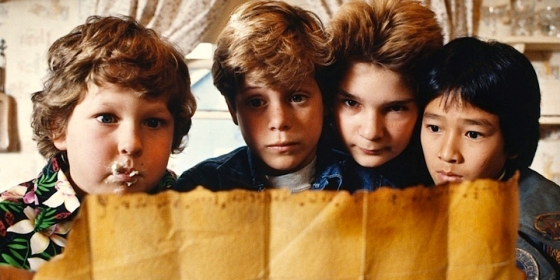 The anti-hero. The one person you would never, in a million years, expect to be the one to stand triumphant and loved at the end of the fray. The one person, at the beginning of every great movie, you sort of assume is going to take the day, but part of you just shakes its head almost knowing that it’s impossible. Yet, some of the greatest films of all time, especially the great eighties, feature this very idea. Oh sure, hero movies were just as popular, but there is just something to be said for the odd-person-out making the biggest impact. Here are the top ten greatest anti-heroes from the 1980s. 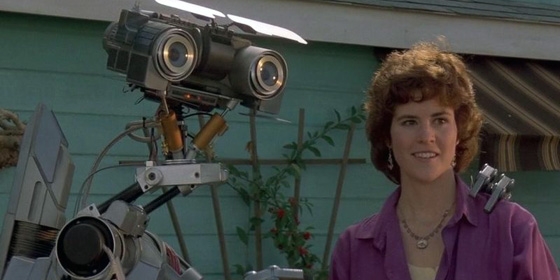 When a short circuiting robot shows up at her door craving ‘input’, Ally Sheedy as Stephanie realizes she has stumbled upon quite the opportunity. So, after shirking her normal responsibilities, she ‘adopts’ the wayward droid and teaches it everything her little life has to offer. But not all good things continue the same way. Once Steve Gutenberg makes his pasty appearance, things just get really out of hand. Much like when he shows up for anything. In the end, though, Number 5 prevails by outwitting a slew of less educated bots with the help of his new friend, Stephanie. So damn cute. 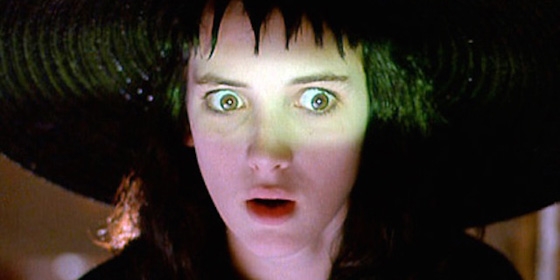 The unwitting recipient of a move into a Escher-ish house in the sticks, the brooding and morose Winona Ryder as Lydia makes the best of a rotten situation by eventually befriending a couple of lost souls. Not once imagining that her new home would not only be haunted, albeit poorly, by the married Maitland couple, but also inhabited by the sinister spirit, the ghost with the most, Beetlejuice, Lydia thwarts the evil-doers advances and helps banish him to Limbo’s waiting room for eternity. And all she had to do was say his name a couple times… I sure wish I had that power. Often. 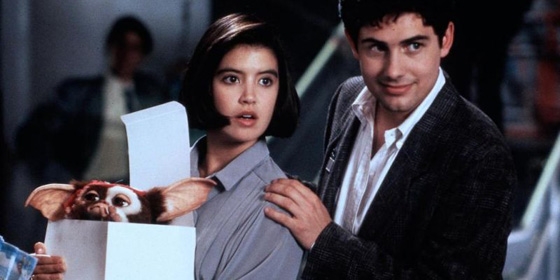 What’s the first thing any normal, idiotic teenager does once he receives a very special gift that comes complete with a list of three very VERY important rules? Why, break those rules, that’s what! And sure enough, that’s what Billy does within a day of acquiring the Mogwai, Gizmo. All he had to do was not get them wet, not show them any bright light, and not feed them after midnight… simple, right? Yeah, well Zack Galligan as Billy Peltzer is far from the sharpest knife in the drawer, but with the help of his far-too hot girlfriend, Phoebe Cates as Kate Beringer, and the aforementioned Gizmo, they eventually do right all the wrongs they inadvertently caused in the first place. Lot’s of damage, though. LOTS. 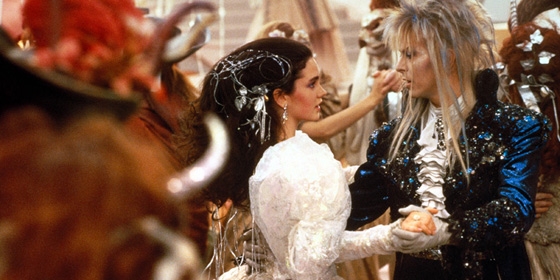 Though Jennifer Connelly as Sarah basically creates her own hell by wishing her sobbing little brother, Toby, away, she never actually imagined that a Goblin King (David Bowie, even) would show up and make her ill-timed dream come true. Befriending a menagerie of creatures through the seemingly impossible and impassible maze, Sara eventually reaches the goblin hideout and through a show of great strength and a bit of attitude, returns everything back to normal. Just, for a second, imagine David Bowie showing up in your bedroom. In tights. Ok, that’s enough. 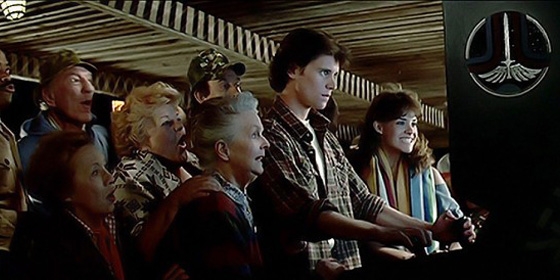 Alex Rogan (Lance Guest) lives in a trailer park where his mother is manager and everyone is like a big extended family. He beats the Starfighter Video Game to the applause of everyone in the park. Soon he meets Centauri, who introduces himself as a person from the company that made the Starfighter Game, and before Alex really knows what is going on he is on the ride of his life in a “car” flying through space. Chosen to take the skills he showed on the video game into real combat to protect the galaxy from an invasion, Alex gets as far as the Starfighter base before he finally realizes that he was ‘conscripted’ and requests to be taken back home. Unable to go home and live normally, Alex returns to the Starfighter base to find all the pilots have been killed and he is the galaxy’s only chance to be saved from invasion. To defeat the invaders, who are paying the Bounty on him, He must be victorious. Oh, and his ship, with the ‘button’, kicks all kinds of ass. 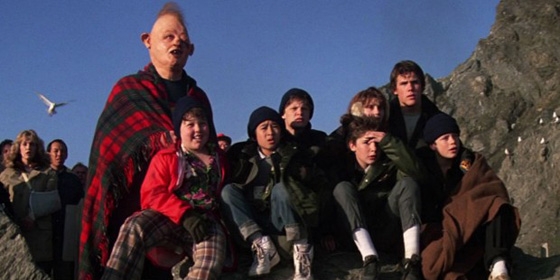 Falling squarely on the shoulders of the tenacious and ever persistent Sean Astin as Mikey Walsh, the group from the soon-to-be destroyed Goon Docks, affectionately called the Goonies, embark on a seemingly ridiculous and far-fetched treasure hunt (is there any other kind?) to save the only home they know. Tagging along with their insistent yet innocent leader are Chunk, Mouth, Data, Andy, Steph, and Brand, who, with the help of a mutant called Sloth, eventually live the dream of every little kid: finding the ‘pot of gold’.

4) Nancy – A Nightmare on Elm Street 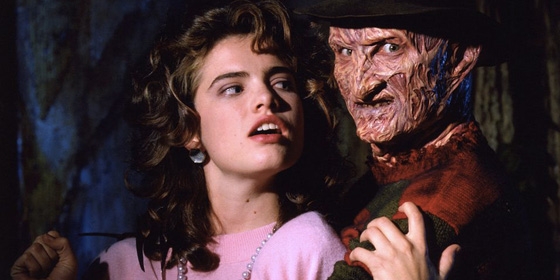 Nancy Thompson (Heather Langenkamp) is having nightmares. Violent, gory nightmares about a mysterious badly-burned man with a razor-fingered glove on his right hand that calls himself Freddy. When she realizes that her friends are having the same nightmares, and that one by one they are being brutally slaughtered in their sleep, she turns to her father who does not believe her and thinks her to be nuts. After she finds out the horrible truth behind Freddy’s rampage she decides to take action into her own hand and bring this dream murderer out of dreamland and into the real world where she can send him straight to where he belongs: New Jersey. Well, Nancy is more or less the lone survivor in this outstanding horror film and manages to make it back for a few more battles as well. 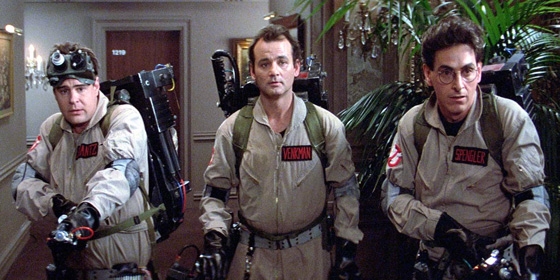 Peter Venkman (Murray), Ray Stantz (Aykroyd), and Egon Spengler (Ramis) are just a trio of normal, everyday Joes who really want nothing more than to make some money by either locating free-roaming vapors in a haunted building, or pretending to be psychics on TV. But none of them is particularly good at his craft. So, what do you do when a situation arises where someone needs a ghost busted? Well, you make lemon-aid, that’s what. After tossing a few proton packs on their collective backs and preparing the spirit containment units, the three friends go off and start collecting the mass of lost souls throughout New York City. In the end, after creating more mayhem then any of them could have possibly imagined via a fifty-foot walking Marshmallow Mascot, they save the day, their reputations, and the grateful city. Well, not so grateful, according to the sequel. Oh well.

2) Marty McFly – Back to the Future 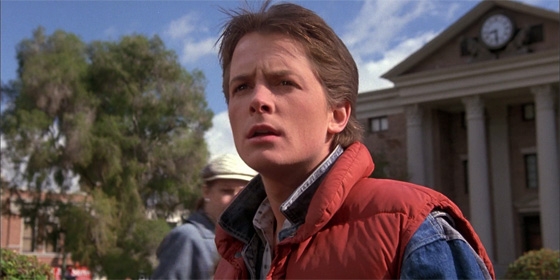 So when a completely bat-shit crazy scientist whom you happen to hang out with requests you travel, via his DeLorean time machine, back to 1955 to rescue the future, you obviously call the authorities and have that loon arrested. Or, if you happen to be Marty McFly (Michael J. Fox), you inquire as to the mechanics of the car, watch the good doctor get gunned down by Libyans, and strap in for the trip of your young life. Marty, never once a fully compliant assistant on this treacherous journey, does everything he can with the aid of the doc from the past to save his own life and prevent his existence from fading into nothingness. That was a long day, right there.

1) The Tri-Lambs – Revenge of the Nerds 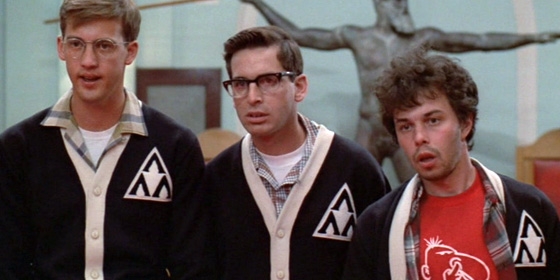 When lovable nerds Gilbert and Lewis embark on their freshman year at Adams College, little do they realize the perils that await them. They’re beset with taunting by the jocks of Alpha Beta fraternity, which only worsens when the jocks accidentally burn down their house and are forced toss the freshmen out of the freshmen dorm. To make matters more problematic, Lewis develops a crush on pretty Betty Childs, popular sorority sister and quarterback’s girlfriend. Joined by the aptly named Booger, the violin-playing Pointdexter, and the slightly fey Lamaar, the nerds soon realize they must form their own fraternity in self-defense. Soon, with the birth of Lambda Lambda Lambda, the tables are turned as the nerds employ high-tech warfare against the jocks.