The Ten Most Unnecessarily Gruesome Deaths in Star Wars 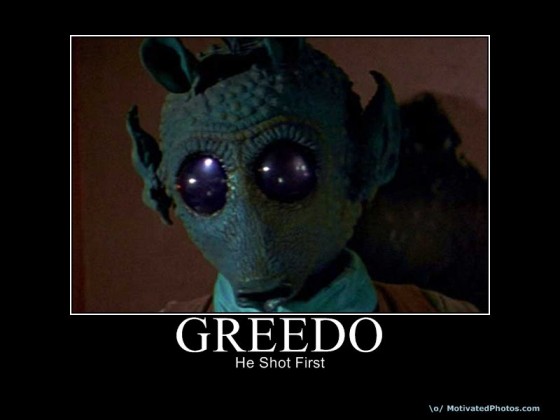 For all intents and purposes, the Star Wars Saga was always a movie meant for the younger audience. Lucas himself has admitted, when bombarded with questions as to why his universe is populated by Muppets and infantile alien races, that the point was to get a reaction from the youth. However, grown-ups frequent his films and have discovered some pretty adult and decidedly less youth-oriented topics. Take for instance the incredibly pointless plot structures based solely on politics and trade routs that infest the far inferior second trilogy. Yeah, kids love hearing about coups and government negotiations. They live for that stuff!

Well, be that as it may, there are far more sinister story subjects afoot as well: Mass, unnecessary killings. For what is, essentially, a Space Opera, to be festooned with so many needless deaths is not quite as mind boggling as you might assume. Despite the fact that the core audience was supposed to be children, for which each and every bit of merchandise would later be geared. Operas in general tend to stray toward sing-song deaths and long, drawn-out farewell scenes. But even so, for those of us who are life-long Star Wars fans, be prepared for a bit of a shock as we explore The Top Ten Most Unnecessarily Gruesome Star Wars Deaths.

10) The Poor Tauntaun, a Furry Tent 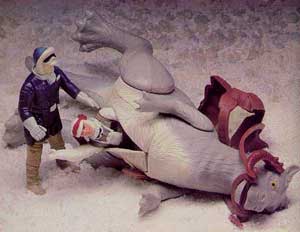 In The Empire Strikes Back, the beast of burden of choice on the planet Hoth was the Tauntaun. So, it came as no surprise that Han and Luke both needed one while scouting about for any signs of the Empire. However, when the going got tough and the weather took a turn for the worse, the Tauntauns showed their true colors. First, as Luke passes by a cave of the notorious Yeti-like snow monster, The Wampa, he gets knocked from his mount when a massive paw nearly decapitates the hapless hairy kangaroo, and drags his gored carcass, oh, and the Tauntaun (rim shot) to his lair to be later consumed. Soon after, once Han has located a dazed and half-frozen Luke wandering around aimlessly, Han uses Luke’s Lightsaber (the first and only time, by the way) and guts the collapsed Tauntaun carcass like a fish and jams Luke’s useless ass inside. Now tell me: do these scenes feel just a slight bit inappropriate for their intended audience? Well, maybe not my kids, but you know what I mean.

9) A Zantac Moment For General Grievous

No one will argue the fact that General Grievous was a sadistic madman of a warlord who stopped at nothing to get just what he wanted, up to and including his favorite souvenirs: Jedi Lightsabers. There should have also been no discernible doubt that he was going to get whacked one way or another. However, that being said, watching Obi Wan fire away at his exposed heart with a laser blaster was pretty damn violent. Though the second trilogy didn’t have much to offer in the way of acting or brilliant performance skills, it is to no one’s disbelief that Ewen McGreggor stole the show, at least within the realm of the Jedi actors (especially over one Hayden Christiansen, but I won’t go into his wooden stiffness here… I said ‘wooden stiffness’.), and this scene in particular iced the cake. We all know how Obi Wan feels about blasters as a whole, so when he went trigger-happy on Grievous’ asthmatic ass, it was almost too vindictive and mobbish up to the point when he dropped the still-smoking weapon and proclaimed it, ‘uncivilized’. Really? 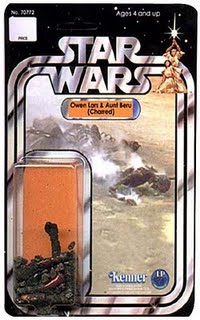 So, while Luke is off following around that wacky hermit, Old Ben Kenobi with droids in tow, Imperial Stormtroopers masquerading as Sand People obliterate and torch the Lars-Skywalker homestead destroying everything inside, including Luke’s unsuspecting Aunt and Uncle. When the revelation finally hits Luke like a ton of blue milk that the possibility of the Empire wanting what’s hanging around in R2’s ‘rusty innards’ surely exists, he hauls ass home to make sure his family hasn’t been engulfed in flames. Whoops!

Oh, and in case the picture isn’t clear enough, the image shows the two charred corpses just hanging around right where children (ie: mine) can ask, ‘What’s that stuff, Dad?’ Nice one.

7) The Sad, Sad Death of a Teddy Bear 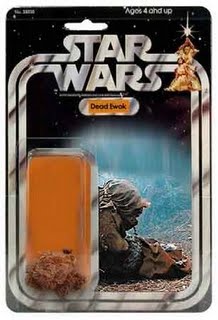 When a big-ass wooded planet chock-full of cute, furry, miniature Wookies (yep, it was originally intended to be inhabited by Chewie’s kin) decides to befriend the Rebel cause, one may want to rethink the course of action next chosen. It’s very much like enlisting the aid of an army of Teddy Ruxpins. Well, as useful and helpful as they ultimately turned out to be; they were far too cute, far from menacing, and initially did nothing more than worship the fey C-3P0 and hump Han’s leg. Soon, however, they were fully engaged in battle and stomping the far stupider Stormtroopers left and right. That is, until one Ewok fell during a skirmish and died in his friend’s fluffy arms. Look, I’m 35 and that chokes me up every time. And yes, I understand countless more likely lost their plush-little lives, but we never saw it! Imagine a five-year old looking at you with glistening puppy-dog eyes, lips a-quiver, asking why the bear is dead! Damn you Lucas! 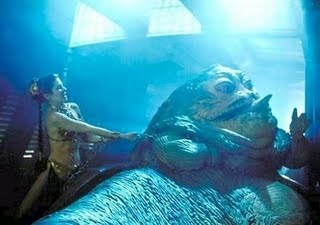 Warning: This scene kills two birds with one stone! It’s simultaneously gruesome as hell and incredibly sexy all at once! Watch at your own risk! Seriously! Metal-bikini wearing Leia chained to the giant, sluggish crime-boss, Jabba the Hutt made a little something stir back in 1986 when I first saw The Return of the Jedi at my local Plaza 2. Let’s face it: Leia was smoking hot and did nothing more than sit idly by, biding her time, writhing for the pleasure of her monstrous captor while Han suffered in the jail cell and Luke fended off the massive Rancor. Then, with a lithe flip and a bit of good timing, she angled herself behind the vile creature and strangled the shit out of him with his own leash. Now that, sir, is something straight out of The Godfather… only with better aliens. Man, to have been a fly on the wall…

They knew it was a suicide mission. Each and every X-Wing pilot was aware of the risks, yet chose to fly on as they cruised into the Death Star trench. Each had his position, and only a select few were to even get in close enough to launch the photon torpedoes into the exhaust port. And yet there were those brave few who were, for all intents and purposes, attention-grabbing targets. One in particular, the eponymous and erstwhile Jek Porkins was there for the soul purpose of getting his flaming ass handed to him. He didn’t disappoint. As pilot after pilot succumbed to the turbo lasers mounted within the trench, everyone gave a silent salute to Porkins as he was vaporized into a roasted, and mouth-watering, ball of bacon-scented fire. May The Forks Be With You!

4) Count Dooku Gets A Little Off the Top

I think everyone kind of knew from the onset that Anakin was a colossal asshole. Oh sure, everyone knew of his ultimate rise to the helmeted Lord of the Sith, but even beyond that, as the young slave boy from Tatooine, Little Annie was still just a damn jerk. So once he’d grown a little and got a taste for what being a rule-breaking Jedi felt like, it was only a matter of time before he was doing Palpatine’s bidding and killing for the sheer pleasure of it. Case in point: Dooku has just entered the room and prepares to do battle, yet again, with Anakin and Obi Wan. Obi Wan, ever the useful floor scrubber, gets his ass handed to him and falls. Anakin, far angrier and broody, whips the snot out of the Sith Lord and fells him. At this point it would have seemed just as logical to call it a day and cuff the old fart, but nooooo… At the request of of the sinister Palpatine, Anakin lops of Dooku’s head. I, for one, didn’t see that coming. A bit over the top… no pun intended. 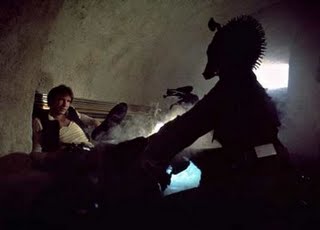 Whether you believe Han shot first (he did) or Greedo (he didn’t), the brutal exchange and subsequent execution in the darkened Mos Eisley Cantina didn’t end well for the green alien. In the original trilogy during A New Hope, we witness one Space Pirate, Han Solo, arguing with one of Jabba’s lackeys, Greedo. They prattle on about how Han still owes the boss money, Han retorts with his insistence that he’ll get it to him, and Greedo finally seals his own demise by pissing Solo off. Han, ever the smart ass, slices Greedo’s yes-man speech with his rapier wit, and guns him down with one blast. Now, as the trilogy went though a series of otherwise harmless repairs, Lucas took it upon himself to decide that it would look better if Greedo fired his gun first. This, however, completely turns on its head the whole idea -past and all- of Han Solo effectively turning him into something far less than his original intentions, ie: a grinning pussy. However, this aside, the cold bloodedness to Han’s killing was fully sealed by the searing plume of smoke rising from Greedo’s dying corpse. Gruesome.

When Vader’s around, there was really no reason for anyone to be carrying a gun. Mouth off, speak ill of the Force, suggest a different strategy… hell, order his sub with pickles: That’s a chokin’. Sure, Vader had a Lightsaber, we all know that, but he only used it while battling other Jedi. If he needed to put some underling bastard in his place, he’d simply strangle the shit out of him and leave his lifeless carcass strewn across the floor. Hell, as the image illustrates, he could crush your windpipe from miles away! Evidently the Force transcends time and space and can ‘F’ you up from a view screen! Man, now that is brutal and a fair bit unnecessary… however completely kick ass. 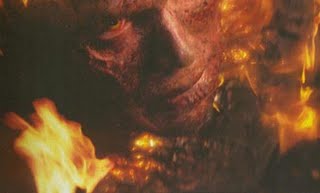 Though slightly misguided and a bit ho-hum, the fall of Anakin as a Jedi at the hands of his once father-figure and mentor, Obi Wan, was still pretty damn gruesome. After the epic battle across the lava pits of Mustafar, Obi Wan gains the high ground and announces so to the persistent Anakin. Stupidly, Anakin leaps to the Terra Firma only to come face to face with the whipping blade of Obi Wan’s Lightsaber as it lops off his legs. Beyond that, it was all up to the fires burning mere feet from Anakin’s fallen form as flames singe him almost beyond recognition. The final words achingly spat at Obi Wan were, ‘I hate you!’ and never before have they stung so much. I have to hand it to Christiansen; his lack of acting ability culminated with a pretty damn convincing denouement… but only just barely. Oh, and to say, ‘but he didn’t die!’ is a bit slight, since it’s exactly what did happen be it figuratively or otherwise: dead’s dead. This scene was the very reason Revenge of the Sith garnered a PG-13: rather disturbing to say the least.