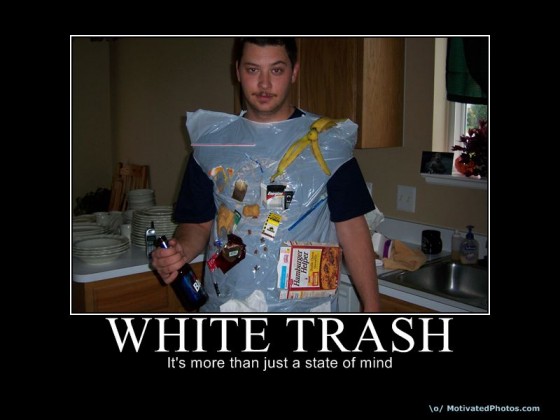 It’s unfortunately all-too painfully obvious that as Americans, we are forced to adhere to certain, shall we say, ‘inalienable’ rights. Oh sure, we have all of the normal freedoms like expression, speech, assembly, and the like, but we’ve also got a bunch of other rights and necessary evils that each and every one of us has had our hand in at one time or another. Being an American comes with a laundry list of idiosyncratic ‘must-do’s’ that often confuse or just plain disgust the casual observer from, well, more civilized nations. Now I’m not saying what we do here to get our kicks is wrong or bad, it’s just a little off kilter and pretty damn odd for folks not initiated to the goings on. Ok, so here we go: The 10 ‘trashiest’ past times for us, the Americans.

Hungry? No need to friggin cook when you’re an American! Look around you in any given three-mile radius and you’ll spy yourself a Fast Food Restaurant! No, not even a restaurant, more like a ‘joint’ or a ‘dive’, really. Even the classier McDonald’s or Burger Kings are still shitty little road side dumps designed to force feed you as fast as damn possible with as little effort as they can muster. So, why cook? Why put forth the effort to actually provide your family with, oh, I don’t know, NUTRITION, when just a block away is the best five-dollar quick meal you’ll ever choke down. Fast Food and America: Bedfellows to the last. 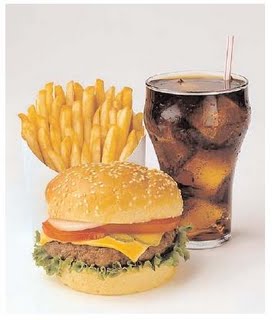 Though a waning bastion of past American greatness, the Drive-In Theater still lingers in places often few and far between. I grew up frequenting the Drive-In and, though generally considered a more low-brow form of entertainment, I have nothing especially bad to say about them. Why on earth would anyone want to actually get out of the car to see a movie in a more weather-controlled, vastly spacious environment while glumly forking over hundreds of dollars per couple when you could just as easily hang out in your station wagon and listen to The Texas Chainsaw Massacre through a set of shitty Radio Shack speaker boxes? I can’t think of a good reason at all, honestly. It’s like staying home but with more bugs, rain, and cheaper sound systems. But I digress. Really. 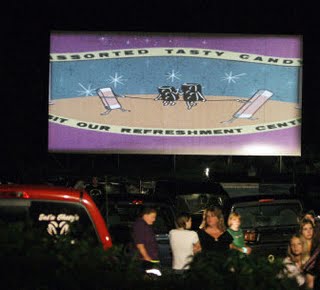 Just take a quick peruse through the check-out aisle of your local grocery store and you’ll be thoroughly satiated by the gluttonous feast that is the Tabloid Magazine. Nowhere is it more possible for America to find out the ‘truth’ about more celebrities than in that twelve-foot area… not even the Internet. From Star to People, from In Style to Entertainment Weekly, it’s all there and in living, vibrant, overly-exposed color. Want to know if Brad Pitt has fathered six illegitimate children with Jennifer Aniston’s mother? Need the knowledge about Tom Cruise’s extra head growing out of Katie Holmes’ ass? Look no further, there’s more than enough of this shit heap to go around. 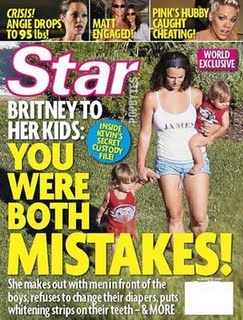 No need to settle for that cheesy little analog/digital converter box! Oh, God no! That’s like excepting a rotary dial into your life. Hell, there’s not even a need to survive solely off of Basic Cable! Goodness, that’s about as last-week as Dial-Up! No, no! What YOU need is a Cable or Satellite Package featuring as many channels as there is beach sand. Shit, go for the exclusive Complete Everything ‘Under The Damn Sun’ pack and you can get every conceivable station from CBS to SHOWTIME 12, from Discovery to VH1 ALL-BEETHOVEN. There is virtually nothing you can’t find on TV these days, and being an American really gives you the right to not only purchase these masses of coaxial goodness, but also RECORD SHIT AS YOU WATCH OTHER SHIT! Oh, I think I just peed a little. 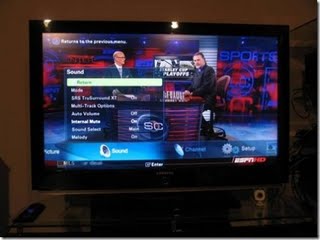 6) Eating in Front of the TV

Remember the good old days when Dad would arrive home from the office stressed like a freakin’ caged monkey and mom would sit everyone down to a meal literally consisting of enough food to feed a third-world nation for a year? Oh, and everyone sat together at the table like civilized human beings and only, on the most ostentatious of occasions such as Kennedy’s Sate of the Union, the Space Shuttle Landing, or the Honeymooners would the old RCA be wheeled into the dining room? Yeah, I don’t either. But that’s neither here nor there. Now a-days, however, we as Americans almost have an allergy to turning the damn digital wall-mount off for any reason, let alone something as dull and arbitrary as meal time! Are you insane? Meal time IS TV time, son! Pass me the peas… and the remote. 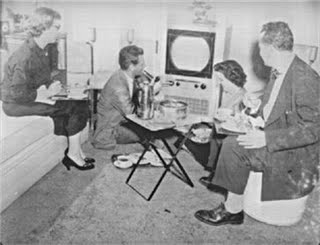 Got plans with a spouse on Monday night? Well break ’em, ya douche bag, WWE is ON! Oh yeah, baby! WRESTLING! Let’s gather the neighbors, our buddies from the plant, a few odd passersby and settle in to a few solid hours of sweaty, manly, gritty, stimulating GUY-ON-GUY ACTION! I can’t wait to see Shaun Michaels rub his ass and bulging dude berries in the face of Chris Jericho! I have got to witness Randy Orton jam his drooling maw into the quivering crotch of John Cena while hoisting him, ever so lovingly over his head to mash him down, ass ahoy, into the mat! DAMN I LOVE THIS SHIT! You’re damn right we’re Americans! Full-blooded and reeking of beer and emulating testosterone! Ah, wrestling! GRAHH! 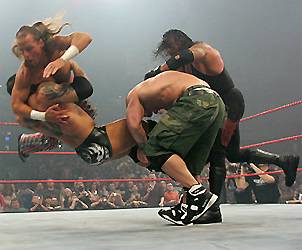 Does anything scream Americanism more like watching a bunch of really damn fast cars go whipping by at 200 plus miles an hour in a giant, Goddamn CIRCLE! I submit that nothing does. Well, almost nothing. Still, sucking down a dozen cold ones while hoping beyond hope that the driver you happen to have tattooed on your chest, your wife’s right tit, and your son’s entire freakin’ skull might just traverse that oval at a higher rate of controlled speed than the other fifty drivers just oozes Americanism at the same time reeking of blatant stupidity. Do you own enough Jimmy Johnson memorabilia to be safely considered a closet stalker in most states? Has your complete set of Mark Martin China cost more than most kid’s college tuitions for four years? Then you, sir or madam, are not only fully American, but also a raging dumb ass. 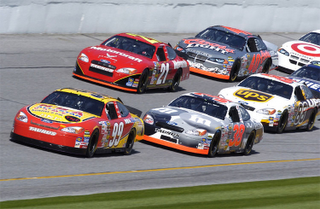 From Garage Sales to Carnivals to The World’s Largest Ball of Laundry Lint, we, as Americans, live for our odd road-side activities where the less we actually have to do, the better. Garage Sales always feature shit that the current owners have discovered no further use for, yet, just know that someone else can bring new life into. Can’t we all use a rusted-out fifty-gallon drum that still reeks of the disposed-of body? Carnivals are so much fun and so damn safe that I would recommend bringing all of your kids to the Swirl and Hurl operated by that one-eyed Junior High drop-out who might be about as high as one kid can get on six mushrooms. And, finally, we wouldn’t be Americans if we didn’t love ourselves some World’s Largest Stuff. Twine Balls, Wooden Shoes, Picnic Basket, Dead Squid… it matters not, we just want to freakin’ gawk at it from twenty feet away for twenty bucks. Or on Discovery. Either way. 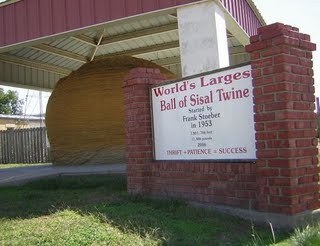 Nothing quite fits the old analogy of multiplying like rabbits quite like the way Wal-Marts have begun to blot out the landscape. Oh, don’t get me wrong, I will go to a Wal-Mart long before I’ll shop anywhere else mostly because it’s a cheap way to inadvertently throw away a hundred bucks on so much shit you really didn’t need in the first place. I can’t tell you how many times I’ve gone into a Wal-Mart searching for one thing, like say, a 12-pack of Magnum condoms, and walked out with sixty other items that were somehow magically dropped into my cart while I stared blankly at that ninety dollar forty-inch flat-screen tv that I had a fleeting notion to purchase. That’s how they get you: living products that buy themselves. I know it’s true. 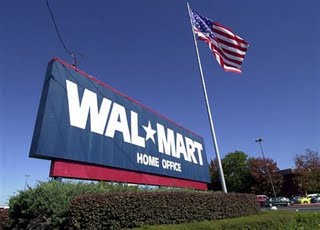 Why is it Americans find the desire to witness other, equally as vapid and retarded, people engage themselves in outrageous situations against other people in the same boat for money or love so damn enthralling? Well, simply put: Because we’re Americans and just because we can have these moronic shows, we damn well do. Every other show, I shit you not, is some kind of ‘Reality’ based ‘Game’ show that features ‘Contestants’ who vie for each other’s ‘Love’ and the ‘Enjoyment’ of the home audience who often play a part in their retention or demise. This is apparently ‘Fun’. I have so had my fill of these intellectually sapping programs inundating the air waves -more often than not, now, on cable as well- that I think I need to run for King of America and banish them for eternity and the people responsible to lives in internment camps featuring real actors and writers with high-powered rifles. Now that’s AMERICAN! 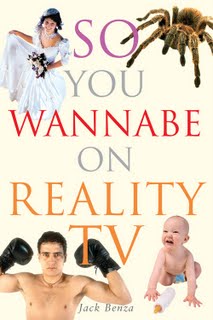