The Ten Worst Star Wars Video Games of All Time 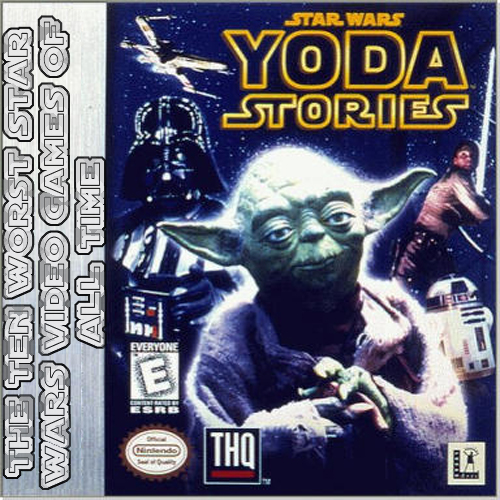 When it comes to storied movie franchises turned into video games, one can easily look in one general direction: Star Wars. Obviously Lucas’s epic masterpiece became a huge source for every source of merchandise from action figures to lunch boxes, and the video games were an obvious outlet into which players could become their favorite characters. However –and just like everything else– there are a few mis-steps in the myriad choices for just about every system available.

From the very first arcade versions of the original film as a first-person space shooter from 1982 all the way through the most recent release of LEGO Star Wars III, Luke Skywalker and company have graced over 100 different video games. Amazingly, 90 percent of which have been hits in one way or another on every console from PC’s to PSP’s. Yet, the bad often time over shadow the good, and go on to become as infamous as them, as well. The following are ten examples of the very worst from the Star Wars lot… likely of all time. But no one can see the future and it’s likely there’ll be more.

Wow, with rave reviews like that –yeah– you’d think this sequel to one of the coolest Star Wars games ever would be a shoe-in huge hit. It wasn’t. It was demon dull and just didn’t feel as fulfilling as its predecessor.

Despite the simple fact that this only appeared on the GameBoy Color is no excuse, as there have been excellent games on the system. This one literally looks like an Atari 2600 game in both execution and visuals.

Sad really. The Wii was a rime candidate for a Lightsaber battle game! It basically is the handles and the sabers appear right on the screen! How hard could it have been to make an awesome game out of that? Apparently very.

MMORPG’s have become huge business, and several based on Star Wars have gone on to be huge hits in their own right. However, when one makes issue of becoming a Jedi, yet making it nearly impossible to do so… well, such are the downfalls of a potentially engrossing property.

So, the prospect of using one of the Original Trilogy’s most overrated yet popular characters, Boba Fett, turned into, instead, a weak attempt to cash in on his father, Jango’s iffy popularity and it didn’t work? Huh… didn’t see that coming.

It definitely had promise. A hired assassin on the hunt for Luke and friends after their destruction of the second Death Star brings the family together to ferret her out and take her on. Sadly, the fight was never brought.

Strategy games are always hit or miss, especially when a product otherwise rests so heavily on action, visuals, and interaction. But, since the Star Wars Universe is so vast, it seemed that it was ripe for that very style. Not in 1998 it wasn’t.

Who hasn’t wanted to pilot the Millennium Falcon? It made the Kessel Run in 12 Parsecs! It assisted Luke in destroying both Death Stars, and Han Solo is practically in love with it! It is an awesome machine! Sadly, this game makes flying it even less fun than not.

So why is this on the list? It’s obviously going to suck in comparison with the games of today, it came out in 1983, you idiot! Yeah, I can hear your gripes. Well for one thing, even the Atari 2600 had a higher ability for playing games than most give it credit for. Sure, most were just differently colored squares moving at random, but something like the designers of this game ought to know better. Basically all you had to do was deflect blasts from a Jedi training drone toward your opponent. But that’s just the point: it was very difficult and just not made for a system like the Atari after all. Oh well, it was boring anyway.

I did play this game on an old Windows 98 machine and, for what it was, it was acceptable at at least kind of quashed one’s hunger for a decent Star Wars game. But, when I got a copy for GameBoy Color, forget about it. It was quite possibly the biggest waste of 20 bucks at least that year. Crap.