The Top 20 Most Kick-Ass Robots 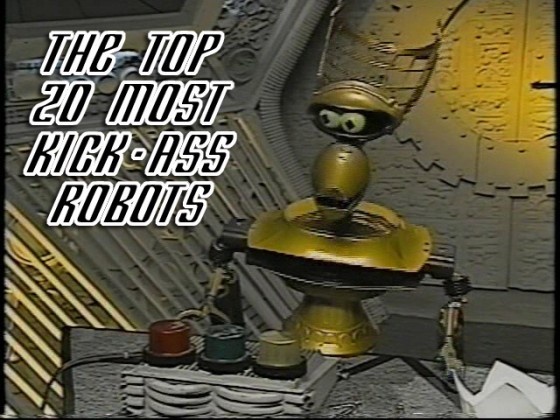 Throughout history, man has dared dream that one day, soon, robots will take over every menial task humans have. We want robots to clean up after us, take us where we’d like to go, wipe our butts… just about anything aside from turn on us and enslave us in dank metallic slave camps. But, since we’re a little slow on the uptake and have only managed to invent robots that can walk upright, talk like barely advanced Speak N’ Spells, and blend coffee beans into delicious treats, we had to show ourselves what such a world might look like in or dreams via films, literature, and TV. Here are twenty of entertainment’s most well known bots.

From our friends at Wikipedia: “Victoria “Vicki” Ann Smith-Lawson (Tiffany Brissette) – Was a robot modeled after a real human girl. The robot was a Voice Input Child Identicant (V.I.C.I.), but was nicknamed Vicki for short. She has real hair and realistic skin. She possesses super human strength and speed and runs on atomic power. Vicki has an access panel in her back, an electric socket in her right armpit, and an RS-232 serial port under her left armpit. Vicki’s artificial intelligence is not perfect. She is incapable of emotion, speaks in a monotone voice, and interprets most commands literally.”

In 2105 the Earth has been blanketed in trash… ya know, just a bit more than it is now. The planet has been evacuated of all of its human populous and all that remains behind (aside from cockroaches) are designated cleaners who attempt, futilely, to remove the garbage. WALL-E is one such robot who has a bit more sentience than you’d guess.

Daleks and Cyber-Men From Dr. Who

The Doctor, over the years has done battle with many metallic humanoids, but only two stand out as not only mortal and devious enemies, but also those that have transcended generations and manage to find themselves mixed up with each and every reincarnation of the Doctor time and again. From Wiki: “While the Doctor’s other old enemies, the Daleks, were on the whole unchanged during the original series’ twenty-six season run, the Cybermen were seen to change with almost every encounter. The Cybermen are humanoid, but have been upgraded to the point where they have few remaining organic parts. They retain living human brains as their power source and mind, in the same manner that humans use their brains to move and think.” On the other hand Daleks: “Externally, Daleks normally resemble human-sized salt and pepper shakers with a single mechanical eyestalk mounted on a rotating dome, an exterminator arm containing an energy weapon (or “death ray”) and a telescopic manipulator arm which is usually tipped by an appendage resembling a sink plunger. Daleks have been seen to be able to use their plungers to interface with technology, crush a man’s skull by suction, measure the intelligence of a subject, and extract information from a man’s mind. Dalek casings are made of a bonded polycarbide material dubbed “dalekanium”.

Bishop from the Alien Series

The best part about Wikipedia is that it can be so eloquent: “Bishop has been the subject of literary and philosophical analysis as a high-profile android character conforming to science fiction author Isaac Asimov’s Three Laws of Robotics and as a model of a compliant, potentially self-aware machine. The portrayal of androids in the Alien series — Ash in Alien, Bishop in Aliens and Alien 3, and Call (Winona Ryder) in Alien Resurrection (1997) — has been studied for its implications relating to how humans deal with the presence of an “Other”, as Ripley treats them with fear and suspicion, and a form of “hi-tech racism and android apartheid” is present throughout the series.”

I had to include this, right? How many other dances are there that visually make one look like some kind of epileptic and broken robot? Zero, that’s how many. Everyone know this ‘dance’, but to do in properly, one has to master stopping your body on a dime while feigning herky-jerky movements and loose limbs. It is certainly best suited to those with no friends.

Really? I need to describe this? Just watch, okay?

Voiced by Vin Diesel, the Iron Giant was created for ultimate destruction and were it not for a bump on his skull-analog, he may have just leveled the little town in which he arrived. After befriending a little boy named Hogarth, the Giant proves that he can be gentle, despite the fact that his momentary lapse back to reality obliterates the military. The Iron Giant mixes cool with the looming prospect of annihilation.

Here we have the back stories of some of the coolest robots from TV. Thanks Wikipedia: “The Cylons of the 1978/1980 series, Battlestar Galactics, are not the mechanical foils seen throughout the series, but an advanced reptilian race who created the robots (who were referred to as Cylons within the show) to serve them, maintain their vast empire and to man their military forces in the face of a sudden population drop that eventually led to the Cylons’ extinction — seemingly overnight. The Cylons of the 2003 miniseries and current Battlestar Galactica series are fundamentally different from the Cylons of the original 1978/1980 series. In the new version, the Cylons were created by humans as cybernetic workers and soldiers. As in the original series, the Cylons destroy almost the entire human civilization, chasing a few ship-borne survivors into deep space. Unlike the original series, however, the reimagined series includes twelve Cylon models that are nearly indistinguishable from human beings. Although these human-form Cylons are the focus of the series, alongside the humanoid models there are also Centurions similar to those in the original series“.

“Number Five is alive!” Yep, sure is. Craving nothing more than input from the minute he escapes a military stronghold, to spouting a dictionary-worth of words, Number Five is basically human even up until the end where he manages to trick all of the actual humans, especially Alley Sheedy, Fischer Stevens, and the most awesome Steve Gutenberg. Pretty cheesy movie, though, honestly.

HAL (Heuristically programmed ALgorithmic Computer) is the sentient on-board computer of the spaceship Discovery. HAL is usually represented only as his television camera “eyes” that can be seen throughout the Discovery spaceship. In the original book, HAL became operational on January 12, 1997 (1992 in the movie) at the HAL Plant in Urbana, Illinois. His first instructor was Dr. Chandra (Mr. Langley in the movie). HAL is depicted as being capable not only of speech recognition, facial recognition, and natural language processing, but also lip reading, art appreciation, interpreting emotions, expressing emotions, reasoning, and chess, in addition to maintaining all systems on an interplanetary voyage. My TV sucks.

Model B-9 Environmental Control ‘Robot’ from Lost in Space

“Danger, Will Robinson! Danger!” You knew trouble was on the horizon when this bubble-headed bot flailed his arms around wildly like some kind of sugared-up five-year old. And generally, the near-pedophile Dr. Smith was more than the cause of all the strife, what with his conniving and evil do-baddery. Also, he was kinda gross. Kick-ass robot, though!

From the same mind that brought us The Simpsons came yet another of those FOX cartoons that perished far too quickly, though will return this month on Comedy Central with all new episodes! It featured life in the year 3000. The cast included Fry, a pizza delivery guy accidentally cryogenically frozen back in 2000, several dynamic humans, aliens, and mutants, and the robot known for bending; Bender! All worked at Planet Express pretty much delivering stuff galaxy-wide. Bender was more often than not the cause of every unfortunate issue. A lot.

When Dennis DeYoung of the original Styx line-up belted out his now infamous lyric, ‘Domo Arigato, Mr. Roboto (Thank you very much, Mr. Roboto) for the theatrical Rock Opera, Killroy Was Here, you just new it was going to catch on and stick completely in everyone’s head. Forever. The song tells part of the fictitious story of Robert Orin Charles Kilroy (ROCK). The song is performed by Kilroy (as played by DeYoung), a rock and roll performer who was placed in a futuristic prison for “rock and roll misfits” by the anti-rock-and-roll group the Majority for Musical Morality (MMM) and its founder Dr. Everett Righteous (played by guitarist James Young). The Roboto is a model of robot which does menial jobs in the prison. Kilroy escapes the prison by overtaking a Roboto prison guard and hiding inside the emptied-out metal shell. Festive!

Coming from the foreign shores of Japan, the Transformers were to the new generation of cartoons what G.I. Joe was to American afternoon TV. Some of the most amazing robots doing some of the most amazing things as they, well, transformed into cars, jets, animals, cities, and, yes, rocks. These, ahem, “Robots in Disguise” made robots more than cool. Oh, and however you feel about the film is meaningless other than to recall it was all about Meagan Fox and her vastly expansive cleavage.

Ok, Ok, I realize that Terminators are Metal Exoskeletons with human tissue as an endoskeleton… not technically a robot. But, let’s face it, they’re robotic enough for this list and they are often referred to as such (as well as ‘machines’) as they sure as shit look like ’em, too. And you know what, if ever one of these cats were sent forward through time to eradicate my ass, I’d call ’em everything but late for dinner! HA! That’s funny.

Hey look, Wikipedia can say things about Gort far more accurately and less humorous than me: “The eight-foot metal robot accompanies Klaatu, a visitor to Earth from a distant planet, aboard a flying saucer. He does not speak, but uses a beam weapon projected from beneath a visor to vaporize weapons and obstacles. Klaatu described him as being part of an interstellar police force. He claims that the people of the universe constructed numerous robots like Gort and gave them irrevocable powers to respond to violent actions in order to “preserve the peace.” He further claims that “There’s no limit to what [Gort] could do. He could destroy the Earth.”

C-3PO and R2-D2 From The Star Wars Franchise

From the opening sequence of ‘A New Hope’, the droids became integral parts of not only Sci-Fi-dom as we know it, but also robots as a whole. Again, technically referred to as ‘Droids’ , as in Androids, C-3PO and R2-D2 are as opposite of each other as a set of hastily thrown together friends can be. 3PO with his proper English mannerisms and staunch protocol programming, and R2 with his whistling and beeping communication and child-like outbursts, still manage to help the Rebellion thwart the Galactic Empire at every turn. Also they apparently can slowly dodge laser blasts. Who knew?

DATA – Star Trek The Next Generation

Yea, also technically classified as an android, Data was a vast and virtual encyclopedia of knowledge on the Enterprise. If something needed to be known about anything, Data was the one to ask. However, on a few occasions when Data slipped a circuit or just went bat-shit crazy, you’d better look out since he also happened to be really damn strong and -at least until later episodes- lacked to ability to either feel pain or emotion. Relentless, I’d say.

Take a couple of stranded janitors from Deep 13 (Joel and Mike, respectively), and toss them with a few hand-made and parts-created robots, stir in a ton of incredibly horrible movies, and you’ve got yourself one of the most creative and amazing prospects for a classic TV show. Mystery Science Theater 3000 was so chock full of Pop Culture references and slathered thickly with more humor than most comedy films that it managed to fill out 11 seasons. That Satellite of Love (get it? SOL?) may have faded into trivia history, but it still remains a huge favorite of many people, including me. In fact (a little self promotion here) I own every single episode. Yeah, maybe I’m a little bias… But still: great show=#1.