We’ve all gotta go sometime, and if Death does come knocking on our door or texting us on our cell (if Death is feeling a bit impersonal), then we all should want to make sure we go out in style so that people would say, “Dude, that guy didn’t just die, he DIED!”. So what’s the best place to look for insanely awesome deaths? The movies of course, because no one does decapitation with power drills like the movies does…at least I hope not. Remember, we’re looking at “cool” deaths, so don’t mail us stating we missed the one where some woman gets her head smashed against a porcelain toilet and then flushed around the U-bend, because that’s full of shit… 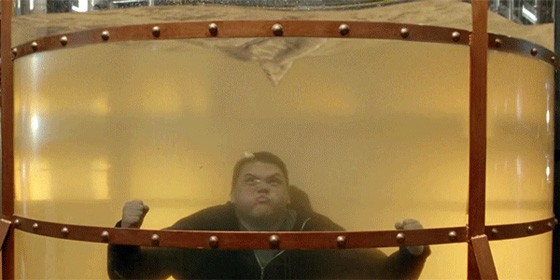 To many of us around the world, drowning has to be one of the most horrific ways to go, but if you change certain factors it can suddenly become the most appealing, such as replacing the unrelenting death water with good, strong beer. In Beerfest the character of Landfill is hurled backwards into a vat of beer. Obviously not being a good swimmer, especially since you float better in beer than water (despite what the film says), Landfill begins to slosh about like a child throwing all his toys out of the pram. In desperation, but also devilish excitement, he opts to drink the entire vat of beer to get himself out of the predicament, seemingly taking in all the beer he can get before dying. 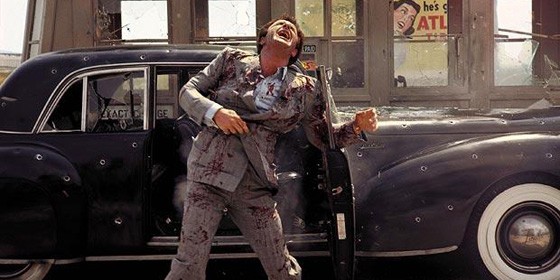 If you are in involved in a mafia film then your chances of getting “whacked” are significantly higher than say that of a florist in a romantic comedy. But getting whacked doesn’t hold as much credibility as it once did, since everyone and their cat are getting taken out nowadays. Sonny Corleone on the other hand, definitely managed to ruffle some feathers, as instead of a simple hit-man coming to clean him out, he gets a small army to riddle him with more bullets than a Cold War stockpile. The real “cool” here is that Sonny manages to drag himself out of his car even though his body already looks like a pepperoni pizza. The death would easily be higher on the cool charts if some fancy pants mafia man hadn’t felt the need to ballet kick Sonny’s dead face. It kinda takes the edge off things. 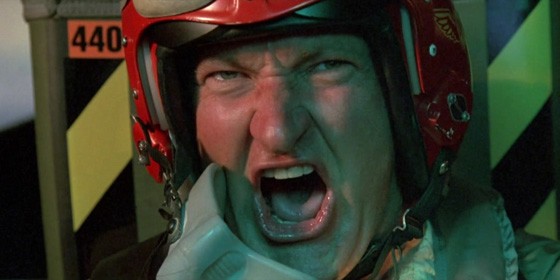 After the President gives his famous “July 4th, Independence Day” speech and signals to his General that in his heart he has always been a combat pilot who belongs in the air (that’s right, fuck the Presidency), the strike team take to the skies. With all possible attack plans exhausted things look pretty bleak. That’s until random annoying redneck Russell “Head” Casse pops out of nowhere with the most beautifulest film quote ever, “Sorry I’m late Mr. President.” Which does beg the question where the fuck has he been while everyone has been coordinating a mass attack on Earth’s wannabe destroyers? Russell then heads directly towards the alien ship in a full-blown kamikaze, ridding the world of two annoyances: aliens and rednecks. 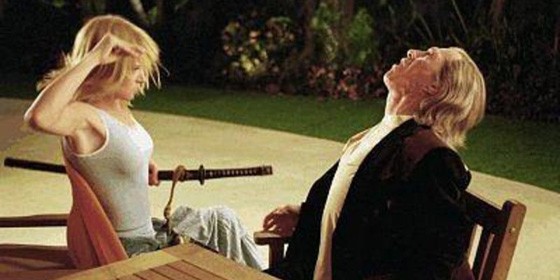 Quentin Tarantino said shortly after Carradine’s real life death that, “If the last chapter of his autobiography was ‘The Mysterious Demise of David Carradine’, that would be perfect”. That was in reference to Carradine’s love for mystery and speculation, however, if he could swap his death with that of his character, Bill in Kill Bill Volume 2 with his current one, then we here at Gunaxin think his death record should read, “Died of 5 Point Palm Heart Exploding Technique” instead of “Died of accidental asphyxiation after tying a rope around his neck and balls.” That suits him better. 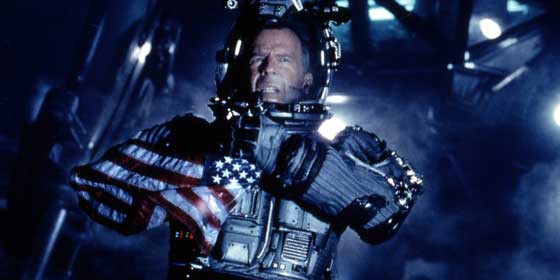 We know we’ve been there. Here at Gunaxin when we were excavating the Earth for our new article, “The Top 10 Neanderthal Women,” we got called up by NASA, who commented on our exceptional drilling skills, so naturally we asked how long they’d been monitoring our sex lives. But not Bruce Willis, he was into a much more different kind of drilling, the kind of drilling that can find you on an oil rig one second and the moon the next. Through a series of unfortunate events that were so unfortunate it made Lemony Snicket’s events look jovial, Willis struggled to drill his moon hole. Therefore Willis did the only thing he could do in the end. He blew himself up on the asteroid with the bomb, in order to save Earth and get away from Ben Affleck’s tantrums and the thought of Affleck touching his daughter. Wise move Brucie. 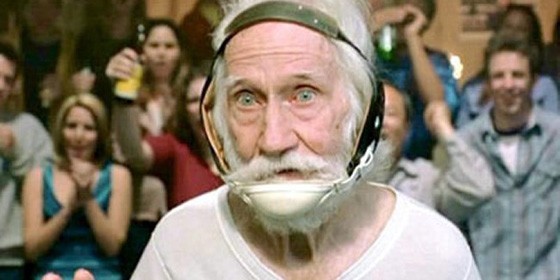 When you get to the age that “Blue” was at in Old School, you have to face facts; you’re likely to never touch young boob again unless you’re prepared to pay a whole lot of cash for it. And you’re not going to have many days where you find yourself as the “P” in Popular at some frat party doing crazy man tequilas through your eyes and licking girl’s faces. But “Blue” is damned lucky enough to find himself in a KY jelly wrestling competition with two hot students, their bodies glistening with jelly, their eyes willing him on to get down to it… let’s not get carried away here. “Blue” will forever be remembered as the guy who snuffed it fondling young women in jelly. (NSFW Clip) 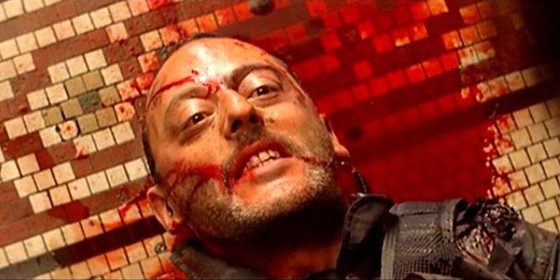 Being a professional assassin is cool enough, but add a stylish sacrificial death and you get a cocktail so ice cool that not even volcanic ash could halt this motherfucker. After seeing off a seemingly insurmountable group of geared up SWAT guys to protect a very young Natalie Portman (Leon obviously spotted her potential before us), Leon hatches his escape plan. Sit and admire this scene as Stansfield sneaks up behind Leon, unknowingly consigning himself to death as well. 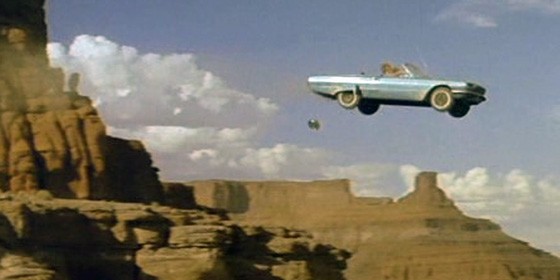 When Ridley Scott’s road trip movie graced our screens in 1991 it spoke about women grabbing freedom and liberty and no longer taking shit from the men restraining them. They did just that, with the film pretty much portraying every man like some kind of greased-up, ass-grabbing, streetlight humper (pretty realistic then). Scott, who had already faced a similar problem with Blade Runner, was once again involved in a battle with the studios to retain his chosen ending. A brilliant thing about Thelma & Louise’s death, (as they cruise off the 2000-foot cliff in their Thunderbird), is that the film ends with the car still suspended in air. So rather than getting a glimpse of the pair having their vital organs smashed against jagged rocks and their slick Thunderbird exploding into huge balls of fire, we see them at the height of their coolness (intentional pun), soaring through the sky in a big f-you statement to the law. 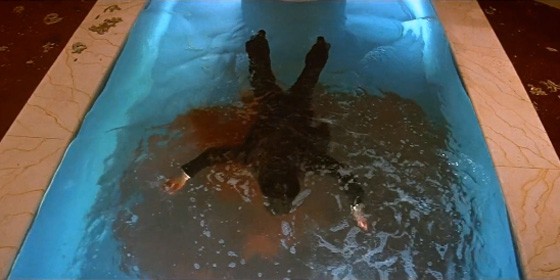 The “Going Out In A Blaze Of Glory” is becoming quite a worn cliche in movies, and sadly real life. But here is the real true guns blazing death, done by Al “I Can Shout Loud” Pacino playing Tony Montana. In this scene, Montana fights off endless hordes of the “I Heart Mustache” fan club while trying to introduce them to his little friends. Unbeknownst to Montana, some dude wearing shades who clearly lost out in auditions for the role of The Terminator, comes out from his tent in Montana’s study and then kill steals by sneaking up behind Tony and shotgunning him in the back with no shame whatsoever. 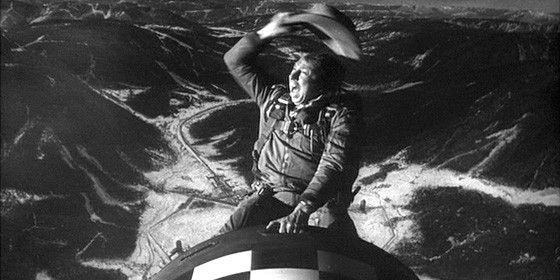 Only cast after Peter Sellers (a man who was already playing three parts) injured his ankle, Slim Pickens stepped into the role of Major Kong and was told to play it as “straight” as he could. Some say Slim Pickens was cast because there was hardly any other options around at the time (with a name like that, that joke had to be done). Slim was an American rodeo performer and his eccentricity suited the part perfectly. So as Major Kong flies out to the Soviet Union with the intention to bomb the crap out of it, he opts to sit on the nuclear bomb in order to repair some overhead wires. In doing so he manually opens the bomb doors and drops down, screaming all kinds of joy as he rides the bomb, rodeo style, into hell, taking Earth with him. Brilliant.