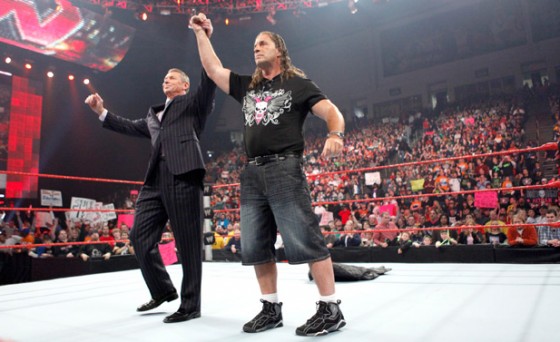 It may have taken him several years to get his revenge on Vince McMahon, but Bret “The Hitman” Hart finally gave old Vince a taste of his medicine at Wrestlemania 26 on Sunday. Maybe he just needed some money, but I was pretty sure Bret Hart had a hole the size of a softball at the base of his neck from years of concussions. Regardless, the self-proclaimed “best there is, best there was, and best there ever will be” made McMahon submit to his patented sharpshooter with most of his living family at ringside. Revenge is sweet!

It didn’t quite rank up there with some of the “Hitman’s” legendary battles, but it’s a victory nonetheless. In honor of his lengthy and accomplished career as a professional wrestler, we give you “The Top Ten Bret Hart Wrestling Matches”. Don’t see one of your all-time favorite Bret Hart matches on our list? Hit us in the comments.

The “screwjob” makes this list not so much for the match itself, but because of the fallout around the “fixed” outcome. In hindsight, Bret should have seen it coming. No way in hell that Vince McMahon was going to let one of his wrestlers walk out of the company as champion and then show up on WCW’s Monday Nitro the next night. Hart was robbed of his title, and not even afforded an appropriate sendoff to his WWE career. Still, you have to hand it to McMahon. Nailing Bret in Montreal and ringing the bell while he’s trapped in his own finisher… when he wants to screw somebody, he does it in style.

Quite possibly the best steel cage match of all-time. At the height of the Hart brothers’ feud, Owen and Bret put on an incredible performance in the ring, on the ropes, and on the cage. “Hitman” eventually wins it after battling with Owen just feet from the ground. The feud didn’t end there as Owen and Jim “The Anvil” Neidhart continued to pound on Bret after the match. Attacking a man during his music is classless, yet classic.

The mid-90s weren’t exactly the most exciting of times for the WWE, but “Big Daddy Cool” Diesel was one of the hottest tickets going. He defended his title against the “Hitman” and after pummeling him throughout the match he got rolled into a small-package for the 1-2-3, and Bret Hart was once again the heavyweight champion of the world. It was commonplace for Hart to get beat down after his victories, and he takes a nasty powerbomb from Diesel post-match in this one.

This match was essentially the one that propelled Bret Hart into super stardom. Perfect and Hart were probably the two best technical wrestlers in the WWE at the time, and Perfect was at the end of a pretty good run as Intercontinental Champion. It was Bret’s first major title win outside of his tag team career.

Austin and Hart squared off in the middle of that Canada versus USA angle that went on for way too long. It was billed as a “submission match” and you couldn’t have pitted two more capable performers together for this one. “Stone Cold” Steve Austin would eventually submit after taking a beating and being bloodied, Austin withstood a sharpshooter for a good five minutes before tapping. Notice special guest referee Ken Shamrock in that spiffy referee’s romper.

Despite nothing on the line, and the match bearing the “tribute” tag, this showdown of technical excellence might be one of the prettiest matches you could ever watch. An incredible send-up to Owen Hart makes for one of the few highlights from the “Hitman’s” days in WCW. Benoit gives up to the sharpshooter and both guys give a proper salute to the late Owen at the match’s conclusion.

Correct me if I’m wrong, but I believe this was the only WWE event where an Intercontinental Championship match headlined. SummerSlam ’92 took place in London, England at Wembley Stadium and man-alive did Hart and the Bulldog put on a show. The storyline leading into this match pitted the brothers in-law against each other despite the wishes of Bret’s sister Diana. Truly a masterpiece of wrestling. Listen for Bobby “The Brain” Heenan’s advice for Diana when they show her on the screen, what a guy!

In a match promised to go a full one hour with the man scoring the most decisions in that time frame being declared the winner. Neither wrestler would score a pinfall or submission during the 60-minute match, so Gorilla Monsoon (bless his soul) ordered the match into overtime! Michaels would win and the torch was passed putting the foundation in place for Hart’s eventual departure a few years later. Michaels can still get it done in the ring today, but he may have been at his all-time best here.

The Owen Hart tribute match was such a success that the bookers made sure that the two would meet up in the final of the WCW “Tournament of Champions” to claim the vacant World Heavyweight Championship. Just another impeccable performance from two of the greatest wrestlers of all-time. Hart would eventually trap Benoit in the sharpshooter to win the belt, and Benoit would eventually kill his family. The Toronto Mayhem was WCW’s first ever pay-per-view to be held in Canada pitted two Canadian wrestling legends in the main event and they didn’t disappoint, although Hart’s WCW music was terrible.

Brother versus brother. Owen Hart wanted a shot at big brother Bret because he was tired of living in his shadow, and Bret obliged by meeting him in the opening match of WrestleMania 10. The back-and-forth action make this match a timeless masterpiece. When Bret Hart is referred to as the “Excellence of Execution” it’s the abilities he displays in this match right here that Gorilla Monsoon was referring to when he coined the phrase. Owen wouldn’t be outdone, either. It was obvious he was never going to rise the level of stardom that Bret enjoyed, but he showed on more than one occasion that he could match his brother move for move and pulled off the surprising win at WrestleMania 10. Maybe one of the greatest matches ever, period. Bret would win the title from Yokozuna later in the night before being confronted by a jealous Owen, this would setup the infamous feud between the Hart brothers.