Ah, nature. She, the cruelest of mistresses. She provides her inhabitants with life-giving water, earth in which to grow many a wondrous bounty, and a cadre of animals just ripe for the picking. But don’t let her sweet facade fool you, underneath all her beauty and innocuous subtlety, Nature is a bitch. Though many things can, and will, kill you without thinking twice ranging from boring plants all the way to tiny microorganisms, it’s these ten animals that really seem to do the most impressive jobs. Of killing you, that is. Damn Nature, you scary! 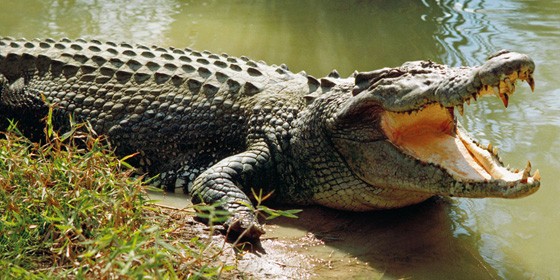 The saltwater crocodile is an opportunistic apex predator capable of taking animals up to the size of an adult male water buffalo, either in the water or on dry land who also happens to be a fuckin’ dinosaur. They have also been known to attack humans. Delicious, fleshy humans. Saltwater crocodiles can also eat: monkeys, gonna, wild boar, dingoes, birds, domestic livestock, pets, water buffalo, gaur, leopards, sharks, and humans, car doors, kitchen sinks, and whole buses among other large animals as well. And, as stated above, if you are anywhere near this thing for any length of time, it will eat your stupid little ass as well. 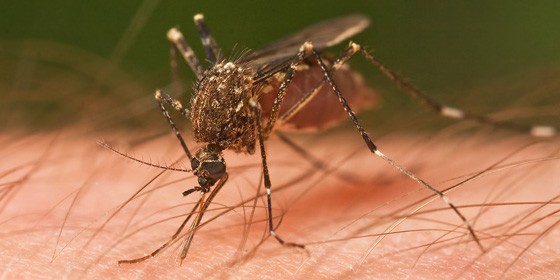 Mosquitoes are a vector agent that carries disease-causing viruses and parasites from person to person without catching the disease themselves, and therefor possibly alien. Female mosquitoes suck blood from people and other animals as part of their eating and breeding habits. When a mosquito bites, she also injects saliva and anti-coagulants into the blood which may also contain disease-causing viruses or other parasites. Much like Edward Cullen. Mosquitoes are estimated to transmit disease to more than 70 million people annually in Africa, South America, Central America, Mexico and much of Asia with millions of resulting deaths. Mosquitoes also happen to be on my own personal list of the ten animals that need to be systematically eradicated permanently. 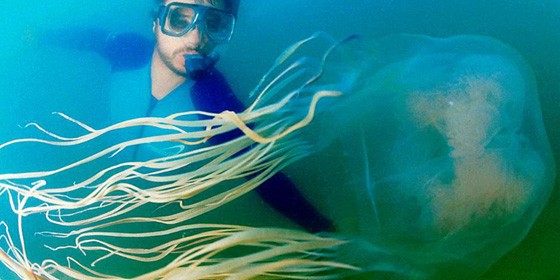 Box Jellyfish are best known for the extremely powerful venom possessed by some of their species. The Chironex Fleckeri and the Carukia Barnesi (Irukandji) species are the most venomous creatures in the world, second only to Rosie O’Donnell. Stings from such species are excruciatingly painful, either initially or as an after-effect, and are often fatal. Also from the jellyfish! Ha! Rim-shot. 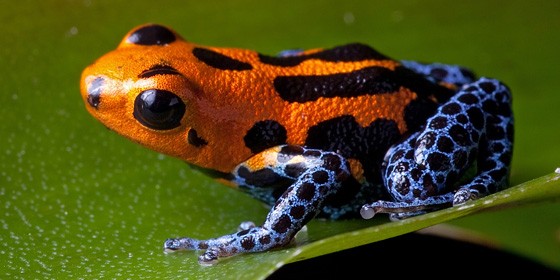 The frogs are often called poison arrow frogs or poison dart frogs due to indigenous peoples’ use of their toxic excretions to poison the tips of arrows and blow-darts. And by ‘indigenous peoples’ we of course mean those crazy pygmy natives from Raiders of the Lost Ark. The most poisonous of the frogs used for poisoning darts is the two-inch-long Golden Poison Frog from the genus Phyllobates. I also highly recommend licking them. Go ahead. Damn, nature! You poisonous! 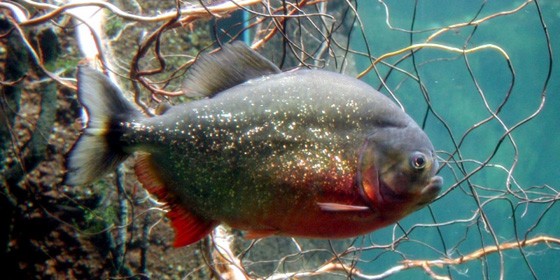 All piranhas have a single row of sharp teeth in both jaws; the teeth are tightly packed and interlocking and used for rapid puncture and shearing. And yes, ‘Puncture and Shearing’ would be an awesome band name. Individual teeth are typically broadly triangular, pointed, and blade-like. A piranha bite is sometimes considered more an act of carelessness than that of misfortune. Oops! Sorry I gnawed off your leg, buddy! But piranhas are a considerable nuisance to commercial and sport fishers because they steal bait, mutilate catch, damage nets and other gear, and may bite when handled. Okay, I know this entry sounds a little weak, especially compared to other fish that have decidedly more potent poisons and attack mechanisms, but just for a second, picture a school of these hungry bastards tearing you limb from limb all because you have a little cut on your leg. Yeah, how’s that! 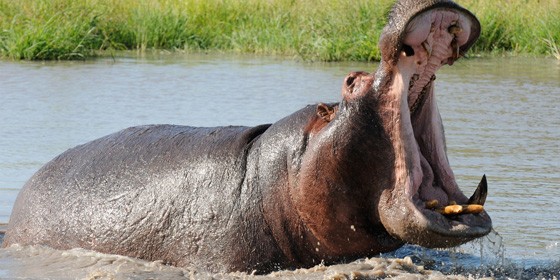 The hippopotamus is among the most dangerous and aggressive of all animals, and are regarded to be Africa’s most dangerous animal. And so is Kirstie Alley. So take that as you will. There are an estimated 125,000 to 150,000 hippos remaining throughout Sub-Saharan Africa, of which Zambia (40,000) and Tanzania (20,000-30,000) have the largest populations. They are still threatened by poaching for their meat and ivory canine teeth, and by habitat loss. Aww… wotta cute wittle baby WITH THE HUGE FUCKING TEETH! 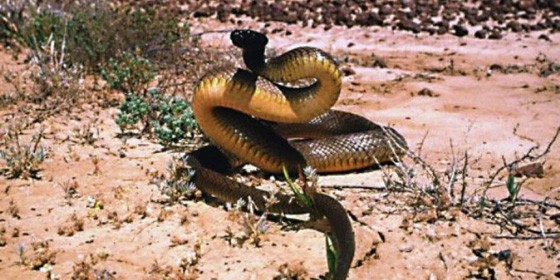 A single bite from the Inland Taipan contains enough venom to kill as many as 100 human adults, or 250,000 mice, or 200 babies and their respective strollers. The average venom yield of this snake is 44 mg, with a 110-mg being the largest recorded yield. Its venom is 50 times more toxic than that of the Indian Cobra (COBRA!!!!) and 650 – 850 times more toxic than that of a Western- or Eastern Trouser Snake. The Inland Taipan has an extremely neurotoxic venom which can cause death to an adult human in as little as 45 minutes. 45 agonizing, excruciatingly painful minutes spent shuddering and sitting in your own filth. Although highly venomous it is a relatively timid snake provided that it is left alone. Even so, if it is suspected that a bite from this snake has occurred, medical attention should be sought immediately. Although known as the most venomous land snake in the world, there have been no documented human fatalities. And that, for the case of this list, sucks. Anyone want a snake? 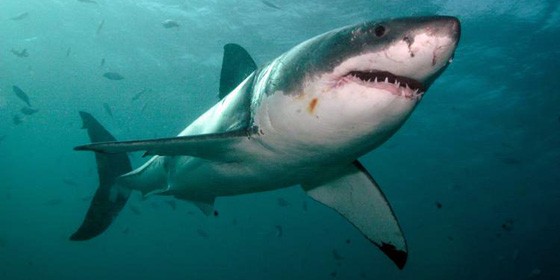 The great white (or JAWS as he’s more commonly known) is regarded as an apex predator with its only real threats from humans and, in at least one incident, the Orca. Pods of dolphins can kill a great white shark through mobbing behavior in which the dolphins ram the shark. Not unlike inner-city youth and the elderly. Although their diets overlap greatly, there are few reports of encounters between orcas and great whites, and they don’t seem to directly compete with each other. Great whites are also sometimes preyed on by larger specimens. Basically we have the irresistible force full of razor-sharp teeth flying out of the water to skewer its prey at full blast. Nightmare city. 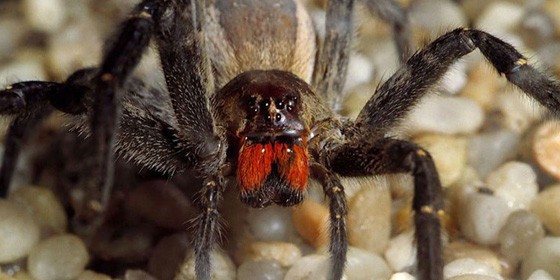 Bites from these spiders may result in only a couple of painful pinpricks to full-blown envenomation (and no, I didn’t just make that word up. I swear). In either case, people bitten by a Phoneutria or any Ctenid (two of the lesser known Kardashian sisters) should seek immediate emergency treatment as the venom is possibly life threatening. The nasty thing not only has a potent neurotoxin, but is reported to have one of the most excruciatingly painful envenomations (see, I used it twice, so it’s okay) of all spiders due to its high concentration of serotonin. The Brazilian wandering spiders appear in the Guiness Book Of World Records for the most venomous animal and is the only spider considered directly responsible for most human deaths due to a spider bite. Oh, and spiders are icky. 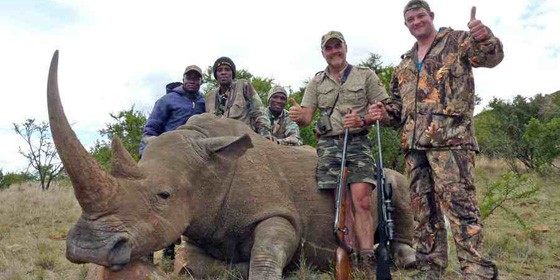 Was there really any other choice? Not that I believe anything other than the Earth is fully ready and able to repair itself, it is alarmingly true that we, as a species, have single handedly wiped out more species of plant and animal than any other in history. Aside from Mother Earth herself, that is. Even so, as we mature as a relatively new species on this regenerative planet, humans have come to realize the error of their collective ways and for the most part have reversed many of the destructive trends. However, in fifty years time, I suspect even more of the already endangered species to fall to the wayside all because of human ignorance and neglect. We’re a bunch of foam-cup chucking, trash-spewing, oil-spilling dicks. Also, we tend to kill each other fairly often.