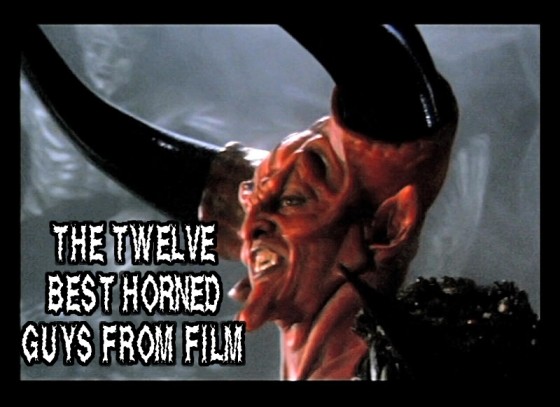 Make sure you read that title carefully: HORNED guys. Not horn-Y. Yeah, or else this list would be about a million strong. Horned? You might be asking yourself? Why yes, HORNED, as in with large protrusions jutting from their skulls. Sorry, no dragons… too many of them have horns. Oh, and if you’re asking yourself, “wasn’t that a bit difficult to do?” The answer is — yes. But since I always come through for my Gunaxin fans, here are a dozen horn-y guys. See what I did there?

While Sarah (Jennifer Connelly) is struggling to find her way through a massive and ever-changing Labyrinth in order to reach The Goblin King (David Bowie) and eventually her brother, she stumbles across many a new friend who, themselves, become unwitting pawns on her troublesome journey. One such beast is Ludo, whom Sarah rescues from some irritating goblins. He quickly becomes Sarah’s biggest and kindest companion. Who also happens to sport horns.

Dagoth From Conan the Destroyer

How’s that for slightly obscure? As it seems in this, the second and far less successful Conan flick, our hero must perform several trials for a princess up to and including retrieving a horn that can awaken Dagoth, pseudo-God of Dreams and Nightmares. Yeah, well, he’s awakened all right and Conan, in a last desperate attempt to weaken the monster, rips the horn right from his head in what turns out to be a pretty damn bloody excising. Nice horn, though.

Erik (soft spoken, at times wussy-sounding Tim Robbins) is a Viking, who questions his way of Viking living: the pillaging, raping and killing… more or less anything that makes a Viking a Viking. So he is sent on a quest to enter Valhalla to wake the gods and end the age of Ragnarok (oh yeah, this thing is full of Norse Mythology), so that the sun might finally shine upon the frozen north and the people would stop killing each other, blah blah. And of course, on the way, they stumble upon troublesome occurrences and comedic situations. Natch. Directed by Terry Jones of Python fame, and often looking a bit like Jabberwocky too.

Satan isn’t typically funny. In fact, generally, he’s just about the polar opposite. But, when he’s fighting off bedroom advances from Saddam Hussein in Bigger, Longer, and Uncut, that friends is borderline lunacy. He’s generally not mean, per se, just more of a big asshole who’s often thwarted by the children. Interestingly, I was torn weather or not to include Satans from every other cartoon ever made since everyone from Tom (Tom and Jerry) to Ned Flanders (The Simpsons) has taken on the guise at least once. But, to me, South Park’s resident devil was more of a central character and not just the other half of a moral dilemma.

Sauron (literal meaning: “Abhorred”) is the title character and the principal antagonist of the fantasy novel The Lord of the Rings by J. R. R. Tolkien. In the same work, he is revealed to have been “the Necromancer” from Tolkien’s earlier novel The Hobbit. In Tolkien’s The Silmarillion (published after The Lord of the Rings but begun decades before), he is also revealed to have been the chief lieutenant of the first Dark Lord, Morgoth. Tolkien noted that the “angelic” powers of his constructed myth “were capable of many degrees of error and failing,” but by far the worst was “the absolute Satanic rebellion and evil of Morgoth and his satellite Sauron.”  Thank you, Wikipedia. And in case you couldn’t tell by the video, he’s got horns-o-plenty.

I’d like to describe George Lucas as the most misguided inventor on Earth. Let me explain. Take Alexander Graham Bell for instance: He’s credited with the first invention patent of the telephone. Once he did, they just got better over the years. Now, take Lucas: He creates Star Wars, and, with assistance, makes a really great trilogy before handing the reigns back over to himself thereby screwing it up big time. My point is (and I do have one) don’t create the coolest Sith ever outside of Vader and then have him whacked in twain mid-way through the first, crappiest, new-trilogy film. You, sir, suck. Darth Maul ROCKS!

The Cyclops From the 7th Voyage of Sinbad

Created and animated by the legendary Ray Harryhausen, the Cyclops is responsible for the following storyline (via Wiki) – “While exploring, Sinbad encounters Sokurah the magician fleeing from a giant cyclops. They are able to escape, but Sokurah drops his magic lamp when the cyclops throws a boulder into the sea, overturning their boat. The cyclops finds and keeps the lamp. Though Sokurah offers Sinbad much to get it back for him, Sinbad refuses. He and his fiancé, Princess Parisa are on their way to Baghdad to be married, to cement ties between their two nations.

When the Caliph of Baghdad (Alec Mango) refuses to provide Sokurah a ship and crew to retrieve his treasure, the magician secretly shrinks Parisa to the size of a hand. Sokurah claims that he knows of a potion that can restore her, but it requires a piece of the eggshell of a roc, a giant, two-headed bird that coincidentally nests on the island of the cyclops. The caliph has no choice but to provide a ship.

On the island, Sokurah insists on splitting into two groups, so that if one is caught, the other can try to rescue them. Indeed, Sinbad’s party is captured by the cyclops. Sokurah finds them, but refuses to release the prisoners from their wooden cage, instead going on to retrieve the magic lamp. The cyclops chases him, forcing him to drop the lamp. Meanwhile, Sinbad slips Parisa between the bars and she unlatches the cage. Sinbad manages to blind the cyclops and trick it into falling off a cliff to its death.” One eye plus one horn equals more than just a flying people eater.

The Bull-Headed Minotaur From Time Bandits

Kevin (Craig Warnock), traveling through time, lands in a world occupied with Agamemnon (Sean Connery) who is matched in battle with a hideous Minotaur monster. The movie is directed by Terry Gilliam and is arguably one of his best. Look, I know this isn’t the most important scene in the film, but this visage is unmistakable and definitely one horned lad.

The Horn King From The Black Cauldron

On the small farm of Caer Dallben, Taran is an assistant pigkeeper (to the enchanter Dallben), who dreams of becoming a great warrior. However, while daydreaming, an oracular pig named Hen Wen is kidnapped by an evil lord known as the Horned King. The villain hopes Hen will show him the way to The Black Cauldron, which has the power to create a giant army of unstoppable warriors from the dead, (known as “The Cauldron Born”). With the aid of Princess Eilonwy, an exaggerating middle-aged bard named Fflewddur Fflam, and an annoying critter named Gurgi, Taran tries to save the world of Prydain from the Horned King.

Ridley Scott directs this not-really-intended-for-children adult fantasy starring a youthful and far less irritating Tom Cruise and Mia Sara as the good guys up against the very evil, and very Tim Curry-esque Lord of Darkness played by, well, Tim Curry. The film is pretty and has a few decent parts, but most unforgettable is this red guy’s mug.

The Faun From Pan’s Labyrinth

One of the most beautiful and heart-wrenching films I have personally seen in a good while (and it takes a bit, trust me), is the story of Ophelia and her limitless desire to escape the war-torn reality of 1944 Spain and live happily with her mother. Upon chancing a meeting of a Faun, he tells Ophelia that she is really a princess and must do three trials to prove such. Ophelia tries desperately to balance her need to keep her promise to the Faun as well as help her mother escape from the clutches of her tyrannical stepfather. See this movie. Doug Jones of Hellboy fame has many roles, and the Faun is but one.

Sprung from the comics, themselves from the mind of Mike Mignola, Ron Pearlman has more than done justice giving life to the good demon. A demon whose true name is Anung Un Rama (aka the Beast of the Apocalypse), Hellboy was brought to Earth as an infant by Nazi occultists. He was discovered by the Allied Forces; amongst them, Professor Trevor Bruttenholm, who formed the United States Bureau for Paranormal Research and Defense (BPRD). In time, Hellboy grew to be a large, red-skinned demon with a tail, horns (which he files off, leaving behind the signature circular stumps on his forehead, to make his appearance more “normal”), and an oversized right hand made of stone. He has been described as smelling of dry-roasted peanuts. Tasty.