Grub > Food > The Whopper Bar: An Exercise In Gluttony

The Whopper Bar: An Exercise In Gluttony 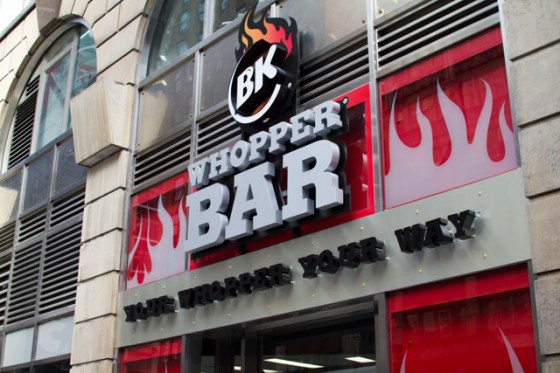 When I was a kid, I once kicked a homeless man to death on a dare. I’m kidding! I never did that. Well, I kicked him, but only in the groin. He was so drunk he didn’t even notice. I think. Anyway, now that I have your undivided attention, I’d like to talk about one of the latest advances in the fast food industry — Burger King’s “The Whopper Bar.”

Found at four locations across the country, including New York City and Orlando, the Whopper Bar is Burger King’s most recent attempt to expand waistlines and clog arteries. With menu items like the “Meat Beast” and “NY Pizza Burger,” it’s a fat guy’s wet dream. And a cardiac doctor’s nightmare.

Why top your 1/2 pound monstrosity with boring ol’ lettuce and tomatoes when you can add such tasty alternatives as bleu cheese crumbles, pepper bacon and something called angry onions? Toss in some funnel cake sticks for dessert and wash it all down with a Turbo BK Joe coffee and you’ll have a paramedic’s defib paddles attached to your chest in no time. 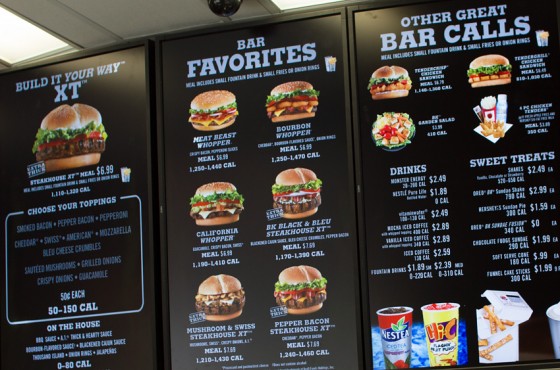 So much fat and cholesterol, so little time.

Like the Burger King mantra says, “Die your way.” Wait, I’ve been told I got that wrong — it’s actually “Have it your way,” or in the case of the Whopper Bar, “Build it your way.” And by build, they mean build a coffin, which will be your final resting place after consuming a “BK Black & Bleu Steakhouse XT.”

For the alcoholic gluttons, there’s a “Bourbon Whopper” crowned (get it?) with onion rings and a bourbon flavored sauce. Wait, I’ve been told there’s no real bourbon in the bourbon sauce. Despite the blatant false advertising, I must commend the BK powers that be for promoting clean living and family values by not including actual booze in their recipe. It’s bad enough that young Timmy and sweet Mary have to watch their morbidly obese father spill over onto the floor clutching his grease-filled heart. Bringing alcohol into the equation would make the horrifying scene much, much worse. (Although, I hear tell beer might be served at the South Beach location in the near future, which blows apart my whole Burger King family values theory.)

The Whopper Bar also offers some delectable healthy alternatives on its vast menu. Like the “Tendercrisp Chicken Sandwich” and the “Ciabatta Tendergrill Chicken Sandwich.” They’re tender, which in BK terms means, less likely to kill you before the age of 50. For example, the aforementioned Meat Beast has 110 mg of cholesterol and 1810 mg of sodium. However, the Ciabatta Tendergrill had only 85 mg of cholesterol and 1100 mg of sodium. Take that, you hippie vegans! 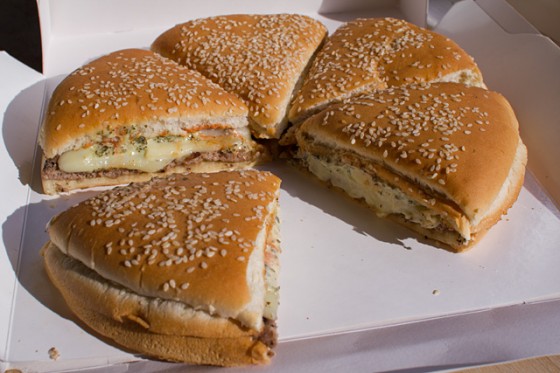 Sadly, I have yet to partake in the wonderful delights the Whopper Bar has to offer, but my pal Matt went to the one in South Beach and conveyed the following critique:

I ordered a California Whopper topped with Angry Sauce and a Oreo BK Sundae Shake. It was totally awesome. I felt excited while eating it. I began to sweat profusely, my left arm went numb and I nearly passed out. Must’ve been the fiery mustard sauce. I’d give you a more detailed review if not for a sudden shortness of breath.

If you’re fortunate enough to live in NYC, Orlando, Memphis or South Beach, the Whopper Bar eagerly awaits your patronage. If you’re unfortunate enough to be stuck in some nowhere hellhole like Cedar Rapids, Iowa or Wheeling, West Virginia, put those vacation days to good use and plan that next sojourn around the Whopper Bar. Because soaking up rays on a pristine white sand beach or exploring the ancient architecture of Budapest pales in comparison to stuffing a Pizza Burger down your gullet and reducing your lifespan by two years.