The World’s Most Expensive Beers

It’s no secret -or at least now it isn’t- that I would take a decent beer over any other drink. I am a brew fan through and through; I take my beer enjoyment seriously and look at as an adventure more than just an excuse to drink. Now I don’t always have enough cash to get the pricier brews I prefer, but I do, regardless, tend to steer clear of Domestic over-processed swill. And it’s that very subject we’re here to discuss: astronomically expensive beers. The five beers that made this collection are not only on the extreme end of the wallet-crushing scale, but they’re also highly sought after and rather rare or only available in select locations. So, sit back, take a sip of whatever you’re havin’, and pine along with me over the list of beers very few of us will ever enjoy.

Where it’s from: Well, let’s just say it’s currently only available at London’s Bierdrome for an astounding $78 a pint. 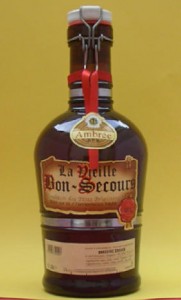 What’s it taste like?: From Beerpal.com “Reddish-golden — a bit darker than what I would have expected from a Belgian 8%ABV Pale Ale named “Blonde”. But no complaints. Ditto for the aroma. Enough complexity in the nose to pique the interest of the taster, and nothing more. Could have been a bit more assertive. The same can be said of the flavor profile. Really could be a bit more assertive and bolder, especially in the front end. As I drank this, I kept on expecting something to pop out at me from left-field. Some sort of additional layer of complexity, or nuance that I missed earlier. But no, this is not bad (not at all), but didn’t really show off much in the way the complex nuances that I enjoy seeking out in beers of this style. Rather, this seems to show it’s cards early in the hand, and leaves nothing to imagination for later revisitation. Easy to put down, but really kinda lacking in complexity in the flavor and the mouthfeel. {Shrug} but I’ve had worse….” 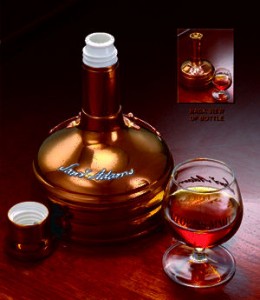 Where it’s from: Believe it or not, it’s from the same place you’d find other Sam Adams beer: The Boston Brewing Company.

What’s it taste like?: From Jim Koch, brewer and founder. “You are about to experience the strongest beer ever brewed. With an alcohol content of 25% by volume, we’ve broken our own record set by Sam Adams Utopias MMII in 2002. Beer enthusiasts have never enjoyed a beer like Sam Adams Utopias. When served at room temperature in a two-ounce serving, Sam Adams Utopias is an ideal after-dinner drink. Pour it into a wine glass or brandy snifter. Note the aroma. Take a sip and enjoy the ideal beer. People have asked what inspired me to brew such a unique beer? Drinkers have long been familiar with light beers. I wanted to show them the opposite end of the beer spectrum. A beer that is strong, rich and dark. Some would say, the ultimate beer. A beer without carbonation, one to be savored slowly. We started by using some of the world’s finest ingredients, including all four types of Noble hops, which give the beer its earthy, herbal taste. The hops also add a spicy note. Carmel, Vienna, Moravian and Bavarian smoked malts add a rich amber color. A variety of yeast were used during fermentation, including the same yeast used in champagne. As a result of this unique brewing process, this flavorful, slightly fruity brew has a sweet, malty flavor that resembles the deep, rich grape taste of a vintage Port, fine Cognac or old Sherry”

Do I want one?: I have actually seen one here at a local purveyor of spirits and, as much as I’d love to say I laid down the cash… well… I could think of a million other things a hundred dollars could have been used for. 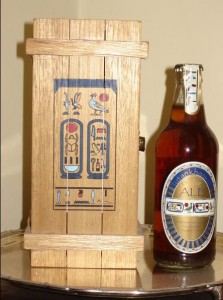 Where it’s from: Egypt! Well, originally. Here’s the story from DUI.com: The beer’s story reads like an Indiana Jones movie. Archaeologists from Cambridge University’s Egypt Exploration Society joined with Scottish and Newcastle Breweries six years ago, when the team uncovered a massive kitchen complex in the Sun Temple of Queen Nefertiti, a relation by marriage of King Tut. Archaeologists’ key role The archaeologists examined grains and seeds left behind by ancient brewers, and the dregs of beer from excavated jars were analyzed to determine how the beer was made. “Even the pure water of the desert wells was analyzed,” said Jim Merrington, Scottish and Newcastle’s project director. “We studied tomb paintings, deciphered (hieroglyphics) and excavated 10 or more brewing rooms in the quest for the liquid gold of Tutankhamen.” In reconstructing the recipe, Scottish and Newcastle brew masters used emmer, an ancient wheat grown by the Egyptians, and coriander, an herb found in the Nile region.”

What’s it taste like?: I couldn’t find a whole lot on the flavor, since I guess it’s some kind of secret, but what I could ascertain was that, judging by the ingredients, it most likely has a white wine note. Still…

Do I want one?: Beer made from an ancient Egyptian recipe? Well yeah!

Where it’s from: Jacobsen Brewhouse, Denmark. You can see it here.

What’s it taste like?: From the folks at bornrich.org: “The designer beer has a chestnut brown color, little foam and hints of prune, caramel, vanilla and oak tree from the French and Swedish wooden casks in which it is stored. The beer goes well with cheeses and desserts according to the brewer.”

Do I want one?: I dunno. With all the ‘snobbery’ attached to this, likely not. Plus, prune? 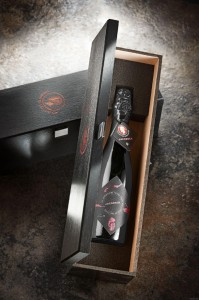 Where it’s from: Jacobsen Brewhouse, Denmark (same as above)

What’s it taste like?: According to some info I gathered, this is the second in the planned trilogy by this company and as you can see from the following description, it’s quite different: “Because of its stout-like origins, it has a jet-black color and espresso-like foam. Jacobsen says Vintage No. 2’s aroma displays hints of tar and ropes, owing to the peat-smoked Scottish malt used for the brew. It is best served at 15-20°C and pairs well with oysters, shellfish, Parma ham and cheese but is equally at home with sweeter delights like chocolate and crème brûlée.”

Do I want one?: Well, I have to say, as an avid fan of the darker brew, I think I would likely murder some folks for a sip. To be frank.

Editor’s Note : Removed Nantucket Whale’s Tale Pale Ale and Chimay Premiere from the list due to inaccuracies, and they didn’t really fit with the others. Sorry for the confusion