Grub > Food > The Worst Breakfast Cereals of All Time

The Worst Breakfast Cereals of All Time 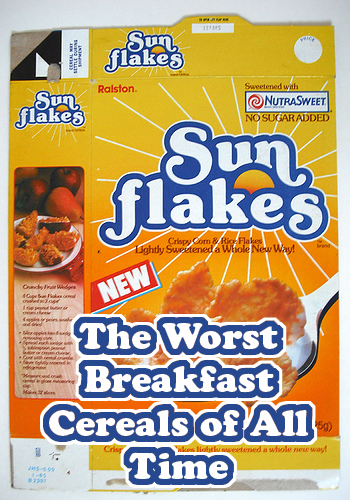 There’s scarcely anything more singularly enjoyable than sitting down to a huge bowl of cereal in the morning. It’s innocent, it whisks us back to our childhoods with things as simple as box art and a familiar smell, and it gives us all something to do while we’re watching our favorite morning TV like SportsCenter. Yes, cereal is one of life’s finest little moments of pure bliss and happiness. That is, unless that box you have there is among the most vile, most hated, most decried cereals around. Then not only will your mouth not thank you, but your mouth will rebel and plot your demise. Trust me. Now this list isn’t about the health aspects of the cereal, or the ingredients in the cereal (for the most part), but it about the taste. The one thing that really matters to kids -kids of all ages- is the taste. It might be the most touted cereal on Earth, but if it tastes like ass, well, what’s the point, right?

Back in the 80’s, just about every single commercially televised property and/or kids toy had a tie-in cereal. Most were no more than puffed balls or shapes colored vaguely to remind one of the product at hand. Above even that was the fact that these breakfast goodies were typically so overloaded with sugar that the kids might as well have been eating candy. Ah but some wised up and realized that a bowl of sweet plus typically lazy children equaled lifeless lumps. So along came cereals like Cabbage Patch Kids touting the virtues of just 3 grams per serving. Well that’s about as much sugar as a carrot! So, yum, right? Wrong. This shit tasted exactly like the inside of the box in was packaged in. In fact, the container likely had more sugar and tasted less like a bowl of dirt. Blah.

Yes I know this isn’t WWF SuperStars cereal, but Andre the Giant in a Honeycomb ad is damn close enough.

Another job of the cereal companies was to promote the likes of random sports figures. Take Wheaties for instance. Their entire existence is to extol the virtues of being a sportsman while simultaneously offering a relatively healthy cereal. But back in the 80’s, one of the biggest entertainment draws for action lovers wasn’t necessarily baseball or hockey, but rather WWF Wrestling! I mean who didn’t love Hulk Hogan, Andre the Giant, The Ultimate Warrior, and Rowdy Roddy Piper? The 80’s were all about the icons of the WWF! So, what better way to get kids moving in the morning than with a delicious bowl of… stars? Oh, I see what they did there… SuperSTARS. Got it. Though they didn’t specifically promote health, they did attempt to steer away from pure sugar and just add ‘a touch of honey’. Yeah, and by touch they meant ‘not actually found in this cereal.’ SuperStars were so bland and awful that you found yourself suddenly hating your wrestling icons. Not cool.

Alright, alright… before you get all up in arms over this choice, let me at least explain why I chose this lettered let-down. First of all, I’m not entirely sure what milk-proof cereal coating was created for these shapes, but the inventors were obviously under the pretext that the more surface area you have, the soggier you’re gonna get. So by some Clark Griswoldian miracle, we have a solid veneer-like patina that almost reminds one of tooth enamel in its impenatrability. Gross. Secondly, I find it hard to believe that the manufacturers have an even number of letters in there. Look, I want to spell curses and epithets in my bowl which is impossible when I run out of ‘F’s! But, the worst thing of all has got to be the taste. Alphabets have that vanilla/sugar cookie/cake frosting thing gong for them only with about an eighth of the sugar. Most boring alphabet ever.

Yes, again I’m treading into cherished waters here since I know that Kix has quite the fan following. And that’s all well and good, but I’d be willing to bet that it’s for the health benefits (or at least lack of much of the bad stuff) than it is for the taste since you and I both know that Kix tastes like the air that wafts out after opening a bag of frozen corn. And it’s not even that the flavor is detestable per se, it’s ultimately that it’s so incredibly dull. They have that drab, flat, sickly yellow hue that reminds me of the sputum from some kind of infectious illness and the excitement value of the same. Kix were almost a punishment growing up when my mom thought we were eating too much sugar. And we were.

Imagine for a second that cereals were like families. Kix would be the greener, hippy sibling of Trix, Cocoa Pebbles would be the tiny offspring of Cocoa Puffs, and so on. Well, The Flakes are a family, too. Corn Flakes, the staunch patriarch of the clan, watches over its family like the Godfather. Frosted is his son; a huge follower of his dad’s work and a huge proponent for the sugar frosting. Ah but there was a far less known and far more worthless sibling to Frosted, and his name was Sun. He tried desperately to follow his big brother, but somehow managed to traverse a path that roamed the darkest corners of the cereal shelves. He not only couldn’t amass the sweet, sweet sugar coating that Frosted could, but his structural integrity also wore away to that of something akin to a scab. Yes, I’m still talking about cereal here. Sun Flakes were like diet cereal for hapless shut-ins.

What better way to disguise the fact that you’ve created the breakfast equivalent to masonry compound, than to give it the most bizarre name ever for anything. It’s like calling a shoe Pottery Ham. However, there is apparently a reason for this nonsense, and here it is (according to Wikipedia) “The cereal is actually made from wheat and barley, in later years, whole wheat so that the cereal could boast the nutritional value. Mr. Post believed that sucrose (which he called “grape sugar”) formed during the baking process. This, combined with the nutty flavor of the cereal, is said to have inspired its name. Another explanation originates from employees at Post, who claim that the cereal got its name due to its resemblance to grape seeds, or grape “nuts.” Either one of those is silly, but I suppose I have to believe since I wasn’t there when they were invented. What I do know is in the time it takes from the instant milk hits the nuts to when you sit down, you have effectively created the shit they make popcorn ceilings from. Yummy.

See, you’ve already shot yourself in the foot with a name like that. You might as well call it Lord Tasteless N’ Healthy, for all the good it did you. Look, there’s nothing inherently wrong with doing away with all the sugar. In fact, I’d rather have a cereal that’s tastes great by only using queen bee royal jelly as its sweetener, than a super promoted cereal featuring the likenesses of Biblical heroes that was doused in frosting and hurt my teeth. But here we have the issue of none of those things being the case. The little hole-punched star shapes were just no match for the dissolving qualities of the acidic milk and they’d turn into bloated wads of mush in a matter of minutes. The taste? Oh, vaguely reminiscent of Cap’n Crunch if Cap’n Crunch was asked to turn in his rank and work as a janitor in a mental hospital. In other words: un-tasty.

Now I never said this list was limited to cold, prepackaged cereals. Oh hell no. That would have immediately voided this particular affront to humanity and that was just not going to happen. Coco Wheats are the end result of when two opposing forces (in this case cocoa and wheat) somehow manage to perversely mingle with one another creating an amalgam so ferociously retched that every God from every culture and religion openly weeps at its existence. If I honestly wanted to eat something with the consistency of industrial tile grout, I’d just skip the theatrics and squeeze a tube into my mouth. I’m not entirely sure if this is supposed to contain a ‘real’ type of chocolate or just a bunch of brown that sadly masquerades as chocolate, but either way it looks like shit and tastes no better. This evil concoction is basically Cream of Wheat with the added benefit of not being stark white. That’s about it. Nasty.