Humor > Sites > The Worst Political Humor on the Web

The Worst Political Humor on the Web 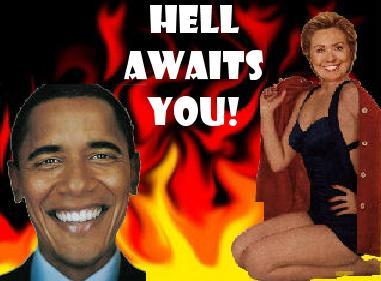 Fact 1: Politics is stupid. Fact 2: Political jokes are even worse.

You know how Bill Maher and Leno and the rest make a damn good living lamely poking fun at politics? By marketing themselves to the kind of people who try to return opened jars of mayonnaise to Wal-Mart. In other words, late-night talk show hosts share more or less the same target audience as Larry the Cable Guy and Glenn Beck. 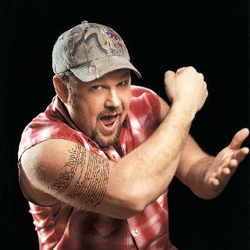 As in all things, if the real-life version is terrible, the internet version is bad enough to make you want to claw out your eyes with a salad fork. As people who make their living making fun of things on the internet, we felt it was our duty to research and hand-pick the most god-awful retarded political humor sites on the web. Enjoy.

Taking pot-shots at the President is a long-standing comedy tradition. Practically everyone has done it and it’s easy to see why: he’s an easy target, and no President is universally liked. That said, there’s nothing more obnoxious than someone who tells jokes about the President, whichever one that may be. Almost as soon as the joke leaves the teller’s mouth, it’s stale, unfunny, and about as edgy as Rosie O’Donnel’s chin.

If we wanted, we could show you about a hundred different sites all telling the same retarded, racist jokes about Obama. Oddly, those sites aren’t nearly as horrible as this “friendly” one. Click the picture below to visit this haven of humor, but beware: we are not responsible for any split sides or spit-take stains.

“Why did the chicken cross the road?” is one of those jokes everyone remembers from grade school, ranking right up there with songs about flushing the teacher’s head down the shitter in terms of wit and content.

Do people still tell those jokes? Apparently the author of that astute, timely piece does.  SKILLZ wants everyone to know exactly what he thinks about the state of politics today, and he doesn’t care who he offends with his razor wit. Watch out for that one, folks – he’s going places.

Bonus failure: If you look at the top left corner of the site, you’ll notice that this is part of the National Lampoon comedy network. Let us take a moment to remember our once-humorous brethren.

At this equally creatively named site, we are treated to a variety of jokes of varying degrees of quality. Our favorites, though, are the old tried-and-true “How many __ does it take to change a lightbulb?” Are you ready for this? Don’t click the link if you aren’t, because this shit’s about to get real. 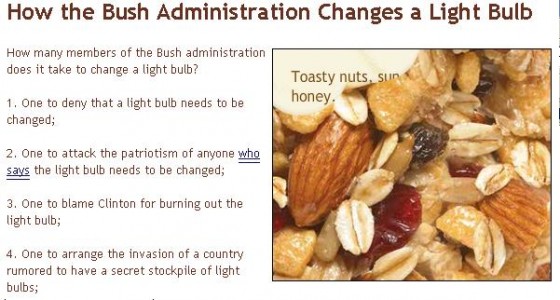 Amid ads for mixed nuts and annoying-ass pop-ups selling…we don’t know what…are these gems. Notice number two. That’s not even an attempt at humor. That’s…what the hell is that? Attack the patriotism of anyone who says the light bulb needs to be changed?

Now, everyone knows there’s no such thing as a funny political cartoon. Every damn one of them is a picture of an elephant or donkey holding a bag of loot with the word Federal Reserve written on it. That’s about as insightful and funny as they get.

Don’t let the name fool you. This site is anything but politically correct!

Actually, that’s just according to Mr. Huber, who describes his comics as both “political and correct” but not P.C. Good thing you warned us, Jim, otherwise we would have thought you were just the zaniest fella that ever was. 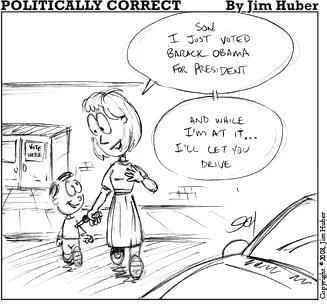 Somebody get this man a straitjacket! Hey-oh! Really though, we’ve seen edgier material in a fucking Garfield strip. It’s like he’s almost trying to say something, but can’t find the balls to do so and instead comes up with this…thing. It’s not a joke, but remember we said political cartoons are meant to be unfunny.

So we guess it’s the perfect example. At least it’s decently sketched, right?

On the other side of the aisle, there’s something much worse than weak, vapid cartooning. There’s this: 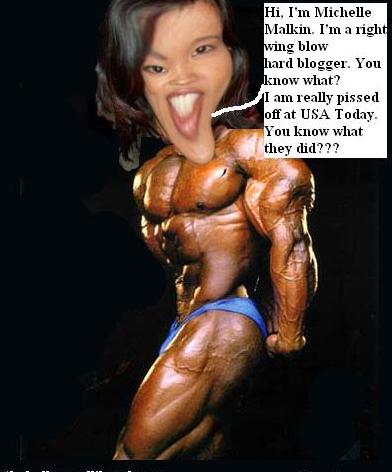 That’s just the tip of the seizure-inducing iceberg. That particular MS Paint “comic” goes on for another four vertical panels, and ends with a charming depiction of Michelle Malkin sporting a raging 2D hard-on. This is the prime example of why politics is the worst thing to ever happen to anything. It’s like The Huffington Post raped 4chan and gave birth to…whatever godless abomination that muscled creature is supposed to be.

The only difference is, when 4chan draws dicks on things, it’s occasionally funny.

In a world where the most popular “news” sources are a a comedy show hosted by an actual comedian, and his spin-off lunatic opposite, you’d think people would put a little more effort into their political “comedy” shows. Or maybe not, if YouTube is any basis for comparison.

Apparently Jon Stewart and Stephen Colbert, hilarious though they may be, have inspired legions of half-baked hacks to sit down in front of their webcams to make silly faces and shout “OBAMANATION!” in an attempt to cash in on the fake news phenomenon. We’re not sure if they’re serious, or just so deep into their roles that even we’re unable to separate the satirical from the sucky.

Yes, that is an animated video of George W Bush calling John Kerry a stupid wiener. And yes, John Kerry’s intellectual response was to call him a stupid dumbass. That faint whirring sound you hear is either interference in your computer speakers, or Woody Guthrie pulling nine Gs while spinning in his grave.

Disclaimer: This was the closest thing he had to a logo

This is one of those scenarios where we’re not quite sure what to think. Is he serious? Is this some specialized school of Method Acting wherein the actor is trained to just be horrible at everything? Honestly, it doesn’t matter.

Damn. Voting Dumbocrat?! Somebody get the Neosporin, because the Blue party just got burned! Get it? Because the-

Remember when we said a second ago that it doesn’t matter if he’s being serious or joking? We were wrong. It does matter. It matters because, if you watched this video and thought “Well, this guy seems to know what’s up,” you need to take a good long look at your life. After that, if you still need convincing, we will find you and do terrible things to you with a can of Mace and the business end of a Mag-Lite.