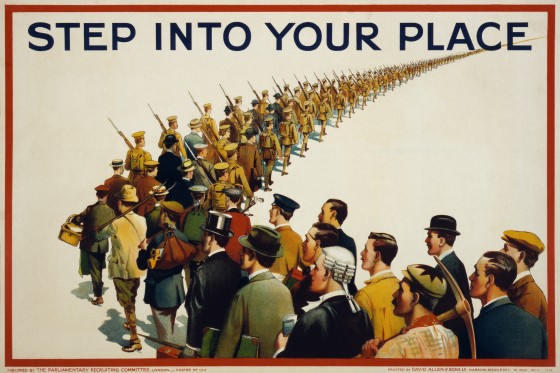 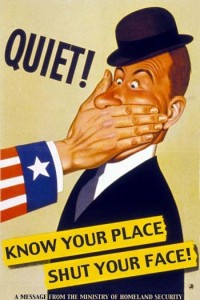 Many companies, factions, groups, organizations, religions, and governments have -and often still- relied on the act of propaganda to influence their core audience and, frequently, anyone who was singularly-minded enough to cower under its morally reprehensible false power. The most used style, just outside of leaflets, was the poster.

Used throughout wars and specific country’s ruling parties, the posters provided the perfect outlet for the voices that no one really wanted to hear. Much we know today has solid roots in using propaganda to ‘spread the word’. Any time you hear someone announce that giving in to whatever is being sold in order to ‘save yourself’, you’re hearing propaganda; even in its most basic sense, promoting one thing over another is still the same thing.

Propaganda: The dissemination of information aimed at influencing the opinions or behaviors of large numbers of people. As opposed to impartially providing information, propaganda in its most basic sense presents information in order to influence its audience. Propaganda often presents facts selectively (thus lying by omission) to encourage a particular synthesis, or gives loaded messages in order to produce an emotional rather than rational response to the information presented. The desired result is a change of the cognitive narrative of the subject in the target audience to further a political agenda.

Here are 13 examples of famous uses of propaganda:

Aimed at the idea that one ought to share gas and expenses with another while going off to work. Even back then this makes pretty good sense: no reason two or three extra cars need to be guzzling up the necessary fuel for the war effort, even if a gallon was roughly the same price then as a pack of gum today. I love the little ghostly image of Der Fuhrer there, almost like a living chalk-outline. Appropriate, no? 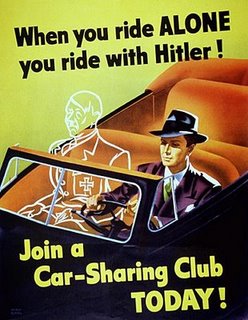 Presumably, staying on the ‘job’, in this instance, refers to joining and remaining with the war effort in strong need to obliterate the marauding Japanese antagonists. According to the little headline snippet, 5200 Yanks (that’s us) were slaughtered in a death march in the Philippines by murderous Japs. I guess I can see why they’d want us to aid in their systematic destruction. And even on this grisly poster, you can plainly see the comical and ultra-racist look of the Japanese male soldier with his furrowed, slanted eyes and mouth full of buck teeth. Yeah, I’m sure that helped. 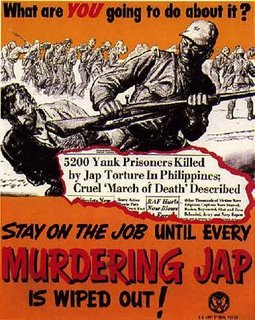 This is the Enemy

This little subtle-as-a-crotch-bound-hammer poster almost leaves the looker guessing: Is the Bible with the bayonet skewered through it the enemy, or is it the Nazi hand that has done the piercing of their enemy? Presumably, it’s the latter as this is an American poster and everyone knows that the Nazi’s were Christian/Jew-hating, war-mongering, soulless bastards. However, I could almost see this as a poster for some band of Left-wing militant anti-religious nuts here in the states. Either way, pretty striking. 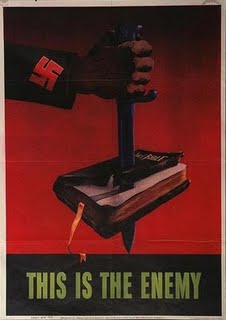 In a nutshell: Unless we can stop everything presumably wasteful we do in our normal, non-War lives, our boys over there will immediately run out of ammunition and our beloved country will fall into a post-Apocalyptic wasteland. Sounds pretty good to me. Please, make darn sure we maintain our killing record! Start making home-made bullets, people! 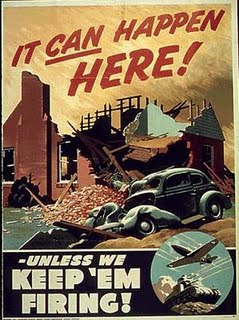 Apparently the last line of defense for the home team. According to the poster, only men between 30 and 50 need apply to the ‘Auxiliary (superfluous) Military (war effort) Pioneer (human shield) Corps (group of guys)’. Man does that sound like fun! I believe this is a precursor to the National Guard, or something similar, where the folks involved don’t necessarily see any fighting. Good thing, I just don’t see people’s dads doing this. Or me, for that matter. 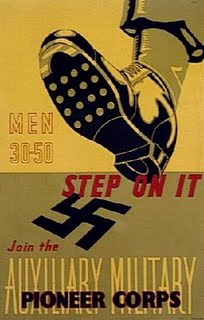 Deliver us From Evil

A striking collection of four very different, yet undeniably similar posters propagandizing specific bits of WWII. The most jarring of the quartet has to be the very first one that looks an awful lot like a trashy romance paperback. It looks as though someone has been or is about to be sexually accosted by, evidently, the Nazi soldiers. Either way she is lost in thought and almost pleading for the onlooker to help her in any way they can. Awful and powerful at the same time. 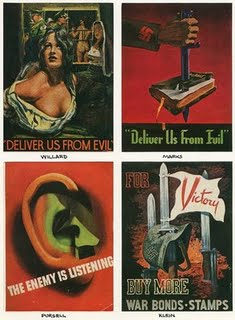 Rockwellian in its beauty; powerful in its portrayal. The three children, each with his or her own piece of iconic Americana, preparing to play just as they’d do in every ordinary day, are suddenly enveloped in a demonic and perversely evil shadow of the Nazi iron cross. ‘Don’t let that shadow touch THEM’ indeed. Purchasing the requisite War Bonds will keep the C’thulhu-grasp of the monstrous regime from touching US soil. Awesome. And spooky! 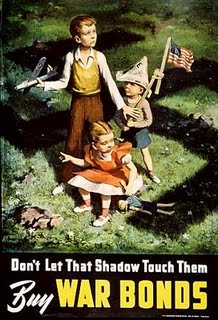 What? Stormtroopers? Like from Star Wars? That sounds co– Oh, wait. Hitler’s Army: those, as Dr. Henry Jones so eloquently put it in Indiana Jones and the Last Crusade, “Goose-stepping morons”?! Oh, never mind. That sounds less than good in a lot of ways. Ok, kill ’em. 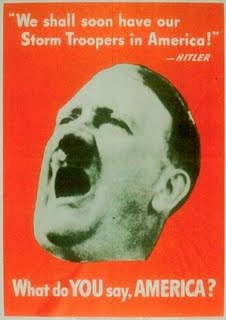 Sowing the Seeds of Victory

Look at the bottom right corner of this very impressive poster. It says: “Write to the national WAR GARDEN COMMISSION…”. The what? I can see the need for converting your 1940’s-era every-yard into a thriving garden featuring fresh food for you and your ravenous 2.5 kids, but why did the government need a WAR GARDEN COMMISSION? No doubt it featured billion-dollar trowels. 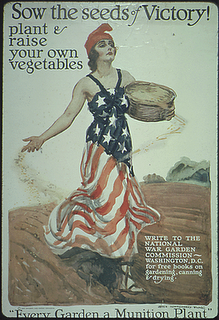 Ya know, I was in Scouts for a LONG time, roughly ten years in fact, and a few things I do recall doing were tying knots, carving Pine Wood derby cars, camping, earning Merit Badges, making fires… but never, ever do I remember doing anything to Godless Sodomites. I wonder if my old friend, Jayesh Mhetah had any idea that this was going to happen when he joined. He was, after all, Buddhist. Probably not. He was adept at archery, though. 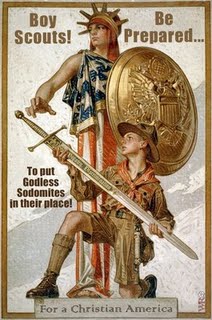 If anyone ever had any doubt of where George Lucas got his inspiration for Darth Vader, this is it. Look how ominous and foreboding the German soldier looks while he’s staring you down and thinking of the myriad ways he can douse you with his Nazi influence. Get Luke Skywalker in here, post haste! 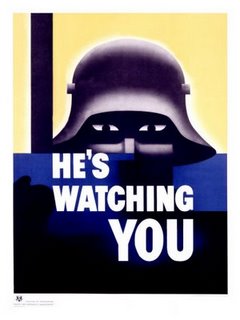 Though not negative by any stretch, it is propaganda none the less. The idea was to get the women, who were otherwise home cooking and cleaning for an empty house while the husbands were over seas whoopin’ some Jap ass, to pick up the cause at home and help create, build, and manufacture ammunition and the like for the war. And it worked, too. Women by the droves found employment, albeit temporary, assisting in any way they could. Wonderful poster. 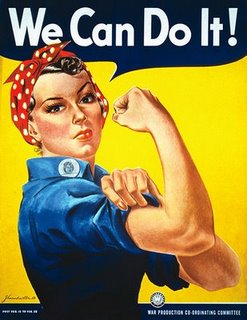 Classic. Iconic. Powerful. Our very own Uncle Sam in one of his original placements attempting to gather the men to war. Or, in some cases under the same image, to sell war bonds. This is the poster one tends to think of when asked who Uncle Sam is and, just as frequently, when one thinks of positive propaganda. Excellent. 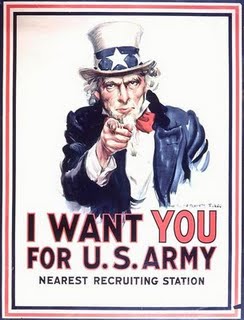