This Week in Viral Videos 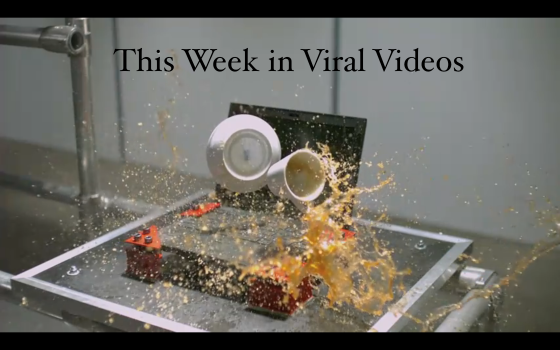 What is on the minds and hearts of America?  More importantly, what is on the Facebook walls and Twitter accounts?  Alright, despite suffering through a shitload of Justin Bieber, this weeks catchiest videos display holiday cheer, current events web browsing set to dramatic music, and of course, ducks being blown over by wind (skip to the bottom if you can’t bear not seeing it).

This goes down exactly like the title says, and it’s so damn interesting to watch.  This kid also looks surprisingly happy considering her parents are using her as some kinda science project.  Well, at over 3 million views, who wouldn’t?

What the hell?  The “Joy of Stats” goes viral?  Well, just like the last one, everybody likes to see time sped up, and this time with an intense British dude apparently pointing at a clear graph in an warehouse. Check out those sound effects!  Also shows how things don’t suck now.

My question is: WHEN ARE FLASH MOBS GOING ZOMBIE?  Staged Zombie attacks at a mall?! That’s the shit I wanna see.  At 18 million + views you guys probably already know about this video.  If not, I wont’ ruin the surprise except to say that the person on the other end of that cell phone is probably frustrated.

If you just woke up from a yearlong bender, this video will come in handy.  A dramatic look at some internet happenings of 2010.  I hear Zeitgeist 2012 is gonna be even better though.

1. Ducks blown off their feet by the wind

Now this is a viral video at its finest.  No speech, no graphics, no music, just a handheld camera and a family of ducks getting attacked by wind.  The story is also a happy one, like a 45 second Disney movie, only without all the cumbersome dialogue and plot stuff.

Tune in Next week for more viral madness!