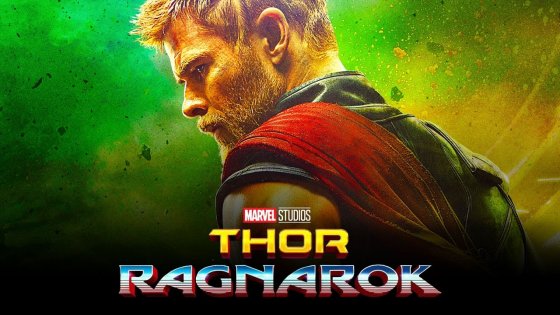 There’s nothing to say about Thor: Ragnarok which will give you any “Eureka!”-type insight into the film. Is the film good? Yes. Is it funny? Verily so. Is it action-packed? Certainly. Are there post-credits scenes? It’s Marvel. There are two – one after the first set of closing credits, then one all the way after the last credit has rolled. Do we see an Infinity Stone at all in this film? Yes, but not in the manner you think. 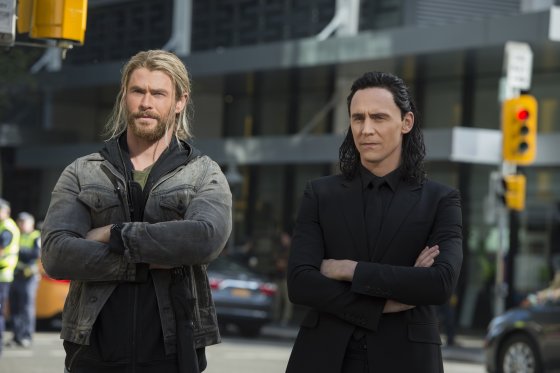 Truth be told, these movies and their formula have gotten old. It’s all the same – opening action sequence (a battle for a demon’s crown), a blast of throwback music (Led Zeppelin’s “Immigrant Song”), the heroes having to go through emotional growth before their objective can be attained, the scenes of mass destruction, the sharp humor… okay, Thor: Ragnarok gets massive credence on that last one. You won’t lack for laughs in this movie. 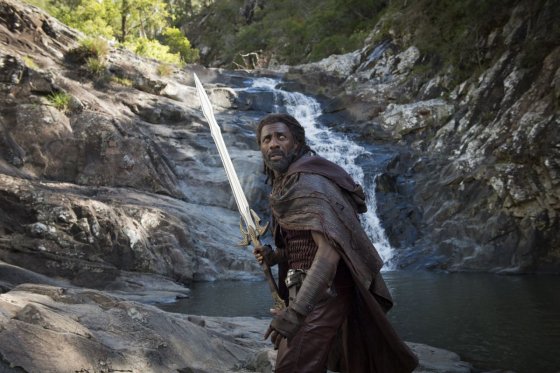 But a time comes during all of these movies when fatigue kicks in. A fatigue which comes with having to keep facts, figures, and motives straight from seventeen movies in nine years. It’s not a hard thing to do, but it is tiresome, especially when some of them start to blend together in your mind.

(Author’s note: This is my ninth review of an MCU film, and I’m having trouble trying to come up with new ways to repeat myself.) 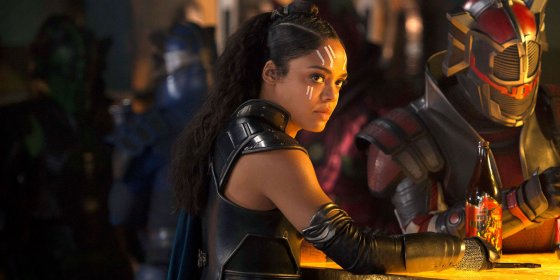 Producer Kevin Feige and the powers that be at Marvel have decided upon a certain aesthetic and process by which these films live and die. While you can see the strides New Zealand director Taika Waititi takes to make Thor: Ragnarok distinct, this could have just as easily been done by any one of the many directors the MCU has had at the helm. That’s no slam on Waititi, but more of a decrying of the homogenization of talented individuals. 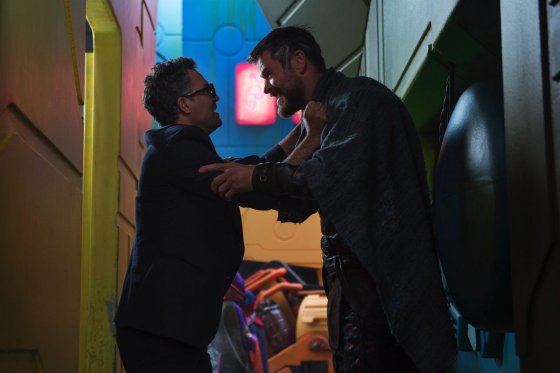 Waititi, who co-wrote, co-directed, and starred in What We Do In The Shadows (one of 2014’s best films), shows an incredibly deft hand as a first-time MCU director. He’s got a sure handle on what’s funny, and how to use the resulting laughter as a propellant for action sequences or introspective moments alike. Best of all, he gets Chris Hemsworth’s best Thor performance to date, balancing Hemsworth’s natural comic sensibilities with the stoicism Thor deserves. He’s magnetic and fun to watch, something lacking from Thor in these movies. 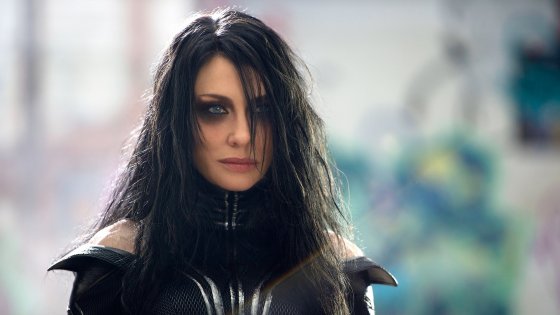 But with the hero must come the villain. What’s with Thor having shady family members? First, it was Loki (Tom Hiddleston) who tried to dominate the universe through the Tesseract in Marvel’s The Avengers, and now… his sister Hela (Cate Blanchett) joins the party. Yes, they are all based on mythical Norse gods, but damn, this family is dysfunctional. Trickster Loki on one side, Goddess of Death Hela (based on the goddess Hel) on the other, leaving Thor, the God of Hammers Thunder trying to keep everyone from killing each other and anyone who stands in their way. 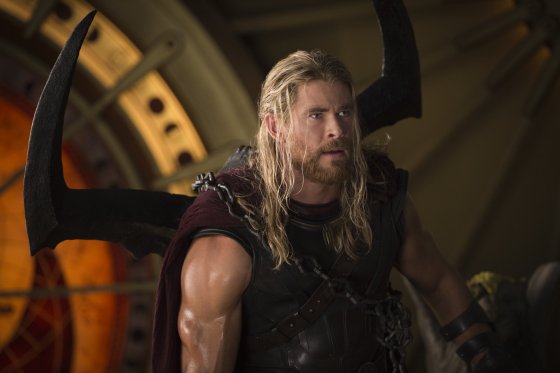 Hela’s one of the most formidable opponents the MCU has ever seen, possessing the ability to conjure stabbing weapons out of thin air and destroying armies en masse. Playing Hela with super-oiliness, Blanchett sinks her teeth into this role, oozing lavish danger and relishing every last word she speaks in her guttural tone. 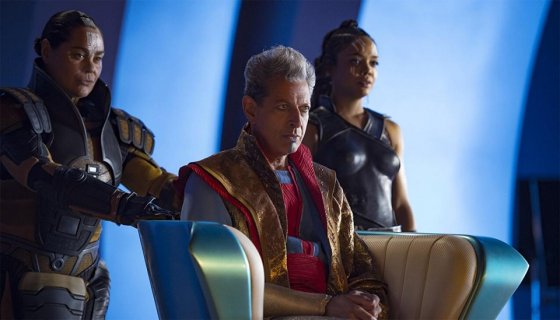 Riding shotgun in Thor’s third solo outing is Mark Ruffalo as The Hulk/Bruce Banner. The movie takes some time to catch up with him after disappearing suddenly at the end of Avengers: Age of Ultron, finding him in the employ of The Grandmaster (Jeff Goldblum) as a gladiator. The Hulk has become The Grandmaster’s version of the Rancor from Star Wars: Return of the Jedi, the beast whom the local lord pits against anyone formidable enough to fight. And it’s not too long before Banner reenters the picture, playing a quick compulsory game of catch-up with Thor before diving headfirst (literally, at one point) into the fray. 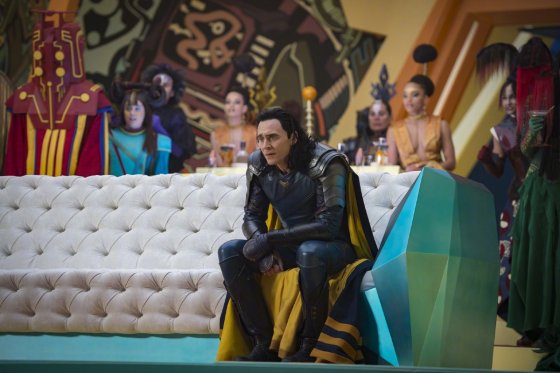 Thor: Ragnarok – so named after the mythical Ragnarök, a cataclysmic event said to end with the deaths of Odin and his whole family – is like one of those crazy rubber balls you get out of the machine at the local toy store. When you throw it, it’ll bounce off the wall and the ceiling before spinning over to crash through the window. Starting right from the beginning, we’re bounced from location to location without so much as a moment to catch our breath. The film’s entire middle section – save for a few scenes anchored by Bifröst operator Heimdall (Idris Elba) – diverts into such ridiculous fun that you almost forget the battle for which Thor is preparing. 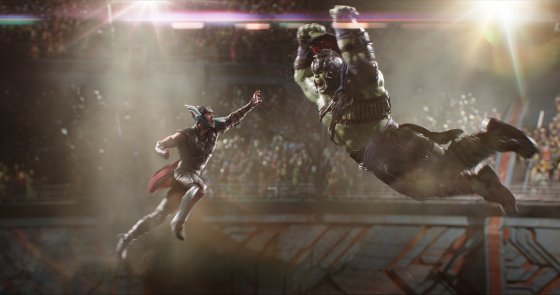 “Ridiculous fun.” That’s the glue holding this film together, familial themes notwithstanding. Really, that’s the glue holding the entire MCU together. These movies are not meant to make pointed social commentary, nor are they meant to be taken seriously. Waititi’s installment makes this quite plain; it’s the ultimate piss-taking of hallowed characters and mythologies. Yes, this may be the seventeenth movie in a long line of past and future blockbusters, but the MCU shows no signs of slowing down. In spite of the trappings set forth by Feige and the Marvel machine, Thor: Ragnarok becomes the much-needed film Thor deserves in his catalog, thanks to a blast of comedy and manic freneticism.

After nine years and sixteen films, the Marvel Cinematic Universe's seventeenth film becomes the much-needed film Thor deserves, thanks to a blast of comedy and manic freneticism.