Just as movie theaters this summer will be packed with comic book heroes, your game consoles will be as well.  Sega worked with Marvel Studios to produce Thor, The Video Game. In the game you take on the role of Thor which is a tie-in to the Kenneth Branagh film that is out now in theaters. I had the chance to play the Nintendo Wii version of the game which is different from the PS3 and 360 verions. The Wii version has an exclusive bonus level as well as more basic levels not available with the other two console systems. The game is also available for the Nintendo DS and 3DS. 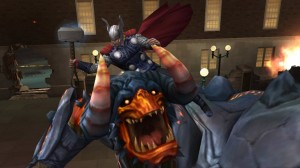 The game is written by Matt Fraction who is a superb comic book author and keeps the action up with his direction of this game.  As Thor you will face off against all of his classic enemies. You can electrocute groups of trolls with Mjolnir (his hammer for those who are not fanboys) and take down frost giants by splitting the ground in two with earth-shattering thunder attacks. With the Wii nunchuck and remote you move the controller from side to side, up and down to smash your enemies into pieces. The control of the game is smooth and easy to pick up with the quick tutorial during the opening of the game. Sega adds all of Thor’s iconic moves as if they were ripped out of the comic book pages. I would have loved to have been able to switch from the nunchuck and remote to the Wii Classic Controller, because I’m an old school gamer and love the feel of the classic controller. With that said I am very satisfied with the control of the game.

“One of our main goals was to bond the power of Mjölnir with the Wiimote,” said Red Fly Studio’s Chad Barron. The result is specialized combo moves and a cyclone feature that allows Thor to save civilians from fires and other hazards. The deep variety of attack options gives the player a choice in how they approach the game. “For the older players, they can go for the more strategic combos. 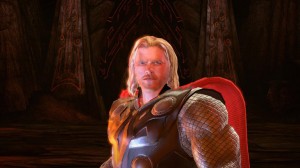 You also get to use the Enchanted Uru Hammer to feel the surging power of a Norse superhero as you devastate multiple enemies with melee combo attacks and hammer throws, utilizing Thor’s elemental storm powers of thunder, lightning, and wind.

Thor will take on an array of titanic enemies dozens of feet tall weighing over 20 tons using multiple strategies including grappling, vaulting and elemental attacks. As the game progresses so does Thor. You can acquire new abilities, powers, and weapon upgrades as Thor earns Valor points through his exploits.

The gameplay is great and I enjoyed all that Thor had to offer in the game. Whether you are a fan of comic books or not you will enjoy the third person action game which can be purchased for the PS3, XBOX 360, or Wii. For more on the game check out the game’s website and the trailer below.