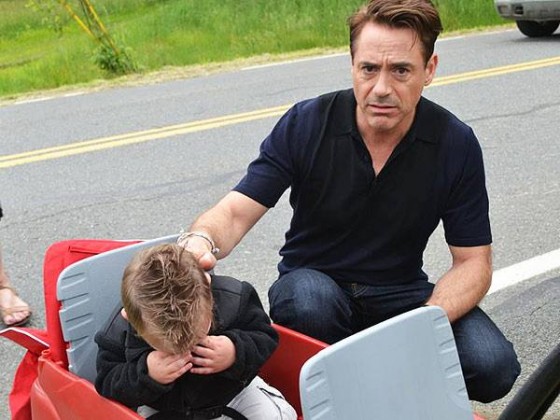 Recently, Robert Downey Jr (henceforth shortened to RDJ) had a brief photo-op with a young Iron Man fan named Jaxson Denno, in which Jaxson was crushed to see that instead of a guy in a bitchin metal suit that fired beams of energy out of his hands, he was visited by some guy.

Now we know that to us, RDJ is the guy who plays Iron Man, he’s played that character so hard he’s probably going to be typecast as an awesome alcoholic who punches robots into the atmosphere until the day he dies, but Jaxson is less than 2 years old. Which hasn’t stopped the internet picking on him, because who deserves to be picked on more than a 18 month year old kid who spent his first 3 weeks of life in hospital, no one, that’s who!

The go to insult for anyone online is to immediately make fun of the other person’s name, if you don’t believe us just scroll up and see if you notice anything about the name of the person who wrote this, we’ll wait.

Now this kid is called Jaxson Denno, which if we’re honest is cool as fuck, if only because it’s an amalgamation of JD from Scrubs and Jax from Mortal Kombat. The internet on the other hand, well …

“Jaxson is a stupid name” – sportzzzgirl.

Making fun of someone’s name, especially when that someone happens to be a small child is so lazy and uncreative it alters history to ensure you were conceived missionary style. If coming up with witty insults was an Olympic sport these would be the people who got to hold the torch because their local community felt sorry for them.

2. Saying the kid is stupid.

Insulting the intelligence of a toddler is like sticking your dick in a McDonald’s apple pie while shouting watch this. All you’re doing is proving that you’re willing to have everyone think less of you for a brief moment of attention. The only difference is that the latter actually involves having balls.

Now we’re not saying that kids aren’t stupid, but that’s only because they’re not blessed with the extra 20 years of life and education we have.

How can they not realize that this kid is 18 months old? We mean, really!

Yeah, why is this kid (who is 18 fucking months old) not aware that RDJ is Iron Man? What, did his parent not let him watch a film where people explode and die? What are they, pussies?

But here’s the beauty of these people insulting this kid, they’re absolutely insistent that RDJ is Iron Man, when he isn’t, he’s an actor who plays him. These people are actively insulting the intelligence of a toddler who is more able than them to grasp that RDJ isn’t Iron Man.

We’re going to say something a little controversial here, but if you’re a toddler who nearly died at birth, you get a bunch of free shit to make you feel better. If that includes meeting celebrities, have at it. In fact we’re glad for that to happen because celebrities posing with kids who are genuinely excited to meet them is heartwarming.

For good measure, if you’re a toddler, you can do stupid things and get away with it (like cry upon meeting RDJ). We didn’t think that statement was that controversial, but apparently, being disappointed that you didn’t get to meet a superhero after being explicitly told you were going to proves you’re spoiled as shit.

“Yeah, fuck kids, why aren’t they all relaxed about everything, like me.”

Of course there were a great number of people talking about how adorable this photo was and we’d also like to point out that the kid did cheer up almost immediately afterwards as the rest of the photos from the event show.

But we’d just like to leave you all with the knowledge that a number of people on the internet saw a kid crying about something that genuinely upset him and their reaction was to be a bunch of huge dicks. And we thought that kid had a reason to cry.