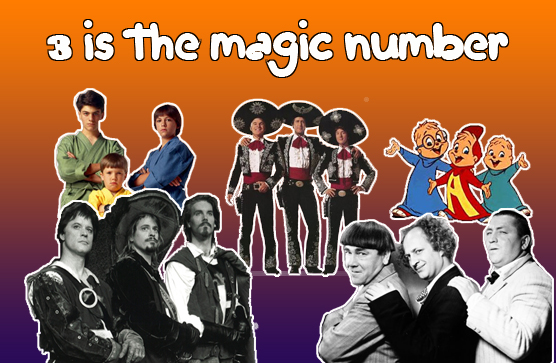 Some things just naturally come in groups of three. Take the S’More campfire treat, for example: The finished product, though greater than the sum of its parts, wouldn’t be a S’More were it to be made without marshmallow, graham crackers, or chocolate. You’d have something else entirely… maybe like a Semi-S’More or something. Anyway, the same thing applies to tying your shoe: the initial lace crossing, the loop or loops, and the crossing of those. You see, without any one of those steps and you’re gonna trip over your laces and look a fool. The point I’m trying to make is, many things come in threes and without any one of the supporting numbers, the group is significantly weaker. So without further ridiculous explanation, here’s some famous groups of three.

Hanging around a Cul-de-Sac, the group collectively known as the ‘Ed’s’ are an inseparable trio of friends who spend their days getting into one misadventure after another. They also have the distinction of being one of Cartoon Network’s longest running shows.

In 1944 Disney was in its heyday. The Three Caballeros was produced as part of the studio’s good will message for South America. The film starred Donald Duck, who in the course of the film is joined by old friend José Carioca, the cigar-smoking parrot representing Brazil, and later makes a new friend in the persona of pistol-packing rooster Panchito Pistoles, representing Mexico. Good, clean family fun.

Three Men and a Baby/Little Lady

Tom Selleck, Steve Gutenberg and Ted Danson under one roof? And it was directed by Leonard Nimoy? How the hell isn’t this the greatest film ever made?

Since I’m not old enough to remember this per se, but I do recognize an historical trio when I see one, here’s this from Wikipedia: “Kukla, Fran and Ollie was an early American television show using puppets, originally created for children but soon watched by more adults than children. Like many early shows, it did not have a script and was entirely ad-libbed.”

Shadow, Chance and Sassy appear as two dogs and cat who want nothing more than to find their way back to the family they love so very much. It’s a tear jerker, a remake, and a prequel all wrapped into one.

Come and knock on our door…..
We’ve been waiting for you……
Where the kisses are hers and hers and his,
Three’s company too.

Come and dance on on our floor……
Take a step that is new…..
We’ve a loveable space that needs your face,
Three’s company too.

You’ll see that life is a frolic and laughter is calling for you……
Down at our rendez-vous,
Three’s company, too!!!!!!

Donald Duck’s rag-a-muffin nephews get sent to live with Donald’s uncle Scrooge while he’s away in the Navy. But shit, who wouldn’t want to shack up with the richest cartoon character in history? Not me, that’s who.

The Three Tenors is a name given to the Spanish singers Plácido Domingo and José Carreras and the Italian singer Luciano Pavarotti who sang in concert under this banner during the 1990s and early 2000s.

Rocky, Colt and Tum Tum. If you don’t know those names then you either were never a child or have none of your own. And just so we’re clear, there are four of these films: the Original, Knuckle Up, Kick Back, and High Noon at Mega Mountain with (wait for it) Hulk Hogan, Loni Anderson, and Jim Varney. Oh Hell yes.

The Warriors Three is made up of the Asgardians (think Thor) Fandral, Hogun and Volstagg. Though the characters are gods of Asgard, they are original creations of Marvel Comics (a wholly owned subsidiary of the Disney corporation, all rights reserved.) and not based on characters from Norse mythology.

Alvin and the Chipmunks

Must I really cover who these rodents are? Seriously? If all you know are the horrendous films, well, then I just feel sorry for you.

Though the Three Blind Mice is originally a Nursery Rhyme that everyone knows, I kinda liked this jazz interpretation better.

Again, this is a well known children’s story largely considered a Mother Goose type story. We all grew up hearing the actual story, but I much prefer Warner Brother’s ‘Three Little Bops’. And so do you.

Originally conceived by Alexandere Dumas, the titular characters of Athos, Porthos and Aramis (along with d’Artagnan) have been re-imagined and redone innumerable times throughout media history. The clip I have is from the Disney version starring Charlie Sheen, Kiefer Sutherland, Chris O’Donnell, Oliver Platt, and Tim Curry.

The simple fact that this eponymous trio is finally being made into a big-budget movie was, unfortunately, inevitable. But, even more ridiculously, is this: Benicio Del Toro is Moe. Okay… Sean Penn as Larry. Wow. And Jim Carrey is Curly. Yeah, see… this is not going to be good.