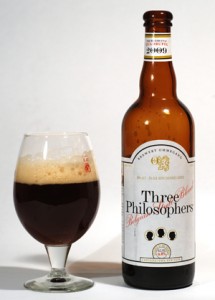 Information: Site – “Cynics can’t believe it, Epicures hail it a sensation, and Pythagoreans just can’t add up what makes this luscious blend of rich malty ale and cherry lambic so delightful. It might be the flavor of dark chocolate and cherry cordials; it could be the way it acquires wisdom and grace in the cellar. Maybe it’s a conundrum. What’s your theory?

The essence of wonder is a unique and masterful blend of strong malty ale and authentic Belgian Kriek. Our philosophers deduce that this powerful marriage of cherries, roasted malts, and dark chocolate will only achieve more wisdom and coherence as it broods in the dark recesses of your cellar.”

Whenever I get a beer in a 1 Pint, 9.4 Ounce bottle, I can typically assume it’s bound to be something special. Especially when there’s a cork in it. So from the makers of such favorites as Rare Vos and Hennepin, I get to bring you a beer that is both a Belgian style Kriek (that of the Lambic variety. In this case cherry. That’s what Kriek means, dontcha know) and a strong ale. Needless to say, I am anxious to get this bottle open. But I had to let it sit a second and drop from fridge temp to 50 degrees. Oh the pains of  enjoying  a good beer…

The pour -as suggested by the bottle itself- is best done with controlled chaos. You don’t want do disturb the sediment, however you do want to create a rich head to open up the beer. Oh and what a head! It was rocky and white and slowly died leaving behind wonderful lacing. The nose is purely that of a strong ale, but that hint if cherry lambic is not too hidden, either.

A very tasty beer, indeed. The maltiness certainly brings out the chocolate essences, but it’s not so much that which springs to mind, but more of a waffle-type flavor with cherry sauce. It’s got a very specific breakfast thing going for it that’s very satisfying. It has an amazingly heavy, toasty quality that comes directly from the fact that it’s predominantly a Strong Ale. This is absolutely something everyone ought to try because it’s not fruity while being slightly fruity at the same time… just ever so lightly. But it really is the strong ale that makes it so very worth while. In my book. This would be surprisingly tasty with a grilled cheese on some great Artisan bread. Yum.