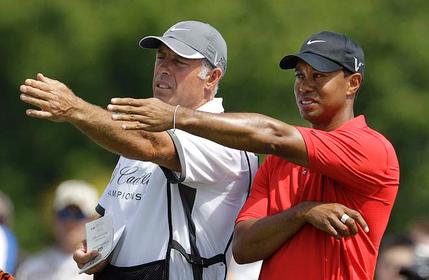 With the recent turmoil that has gone on in Tiger Woods’ life, there has only been one true constant out there on the golf course for him; his caddie, Steve Williams who had been with Woods over twelve years. Sadly, that partnership ended officially on Wednesday when Woods decided to fire him publicly via his website.

However, Woods made the decision after the AT&T National and had informed Williams about the termination of their partnership. Since that decision, Williams has been working with PGA pro Adam Scott during the last couple events, including the 2011 Open Championship.

The real question that seems to stem from this is about Tiger’s decision to fire his caddie that has been with him pretty much since the start of his career. In recent history, Tiger has been a chameleon on the golf course. When he first started out, he was known as a player that could drive the ball with the best and absolutely dominate the field with his power game. Then injuries started to take their toll on Tiger and he had to remake his game. So, change to Tiger Woods isn’t an adverse thing to him and due to some recent transgressions, it seems that Woods is willing to ignore personal relationships when making decisions about what is right for him.

In terms of how a caddie influences a player, Williams was one of the best and it seemed that he let Tiger know the certain situations that would allow him to have the most success. Whether it be choosing the right club or telling him what type of shot was needed to make, Williams was a constant that Tiger will miss when those situations comes across. However, it really is tough to tell how much a caddie influences a golfer and whether he can be replaced by someone else. You can have the best caddie in the world but it’s still not going to win you golf tournaments and majors.

For Tiger, the search begins for a new caddie and one thing that will definitely come into play is how trusting he’s going to be with his new hire. Is he going to give him a long leash or a short one? Will he trust him when certain situations arise for his caddie to help him make the decision? Much like an assistant coach in basketball, a caddie might tell him to work on something during a round differently and the level of trust might not be there yet as it would have been if Steve was carrying the bag.

In the coming weeks and months, we will see how this will play out and if Tiger made the right decision or not. However, for Tiger and Steve, the partnership that worked so well for so long has finally come to end.