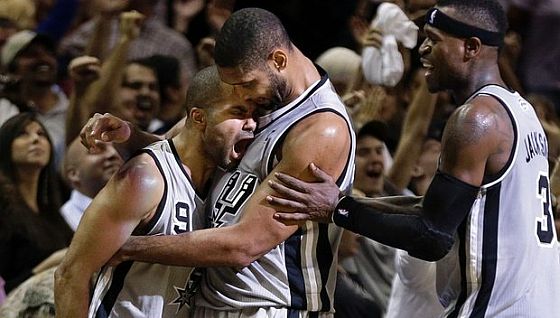 Thunder Forward Kevin Durant might be the best young player in the NBA, and in the conversation for the best player overall. Tim Duncan is in his 16th, and possible final season, and age has started to take its toll on his body. That said, when the two matched up in an opening week game it was Duncan who came out the winner, thanks in small part to this block on Durant.

After being upset by Oklahoma City in the Western Conference finals last season the Spurs decided to get the band back together in 2012 for one last run at an NBA title. With an aging Duncan leading the way, the Spurs defeated New Orleans in the opener before taking on a Thunder team that is in disarray after trading away James Harden. Duncan took no pity on the Thunder, however, going 20/8/3 while leading San Antonio to an 86-84 comeback win. It’s early in the season, but if Duncan can recapture his youth the Spurs will again be a force in the West.