Sports > Football > How Tim Tebow Fits With All 32 NFL Teams

How Tim Tebow Fits With All 32 NFL Teams 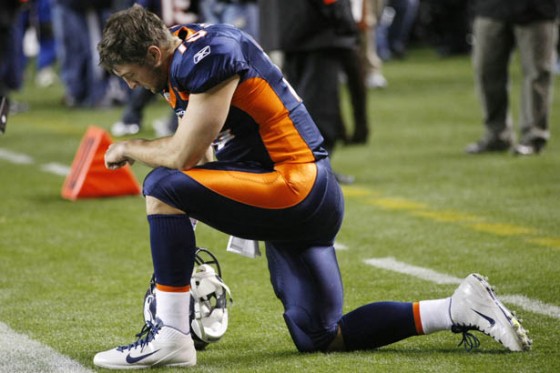 Now that Lord Manning has joined the mile-high club in Denver, all eyes turn to last year’s news, Tim Tebow. Will smilin’ John Elway ship the pious signal-caller out of town, or will he keep him as insurance for when Peyton’s dead arm falls off mid-way through the 2012 season? Inquiring minds want to know.

If Quarterback Jesus is traded, which team is best equipped to utilize his one-dimensional skills? Rather than foolishly speculate about where he might end up, I’m going to investigate whether he’s a good or bad fit for every NFL team, including the Broncos. Here goes nothing.

Arizona Cardinals – To further complicate what amounts to a quarterback clusteryouknowwhat, I say a resounding YES. Besides, Kevin Kolb loves competing against mobile quarterbacks that dazzle crowds.

Atlanta Falcons – One of these days the fabulous Falcons are going to realize  Matt Ryan is another Carson Palmer, i.e. talented but incapable of leading a team to a Super Bowl. And I seriously doubt Georgia Bulldogs fans hold a grudge over Tebow destroying them in college.

Buffalo Bills – Hahvahd Man versus Touched by an Angel. Get your popcorn ready. This could get boring.

Chicago Bears – Jay Cutler and Brandon Marshall are gonna get suspended for something. It’s inevitable, like NBC finishing fourth in Network ratings and alien invasion. Do Bears fans really want Jason Campbell running the show? I think not. Tebow Time, come on down! 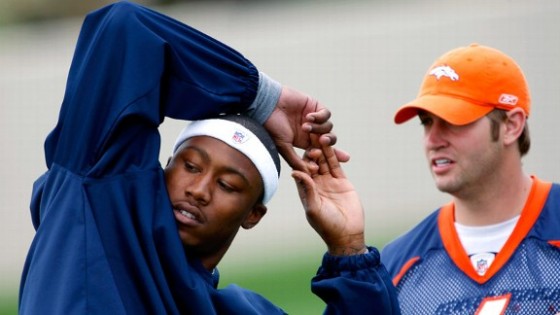 Cincinnati Bengals – if any team could use a little religion in the locker room, it’s the Bungals. Although the stipulation requiring Tebow to wear a clerical collar all day, every day is non-negotiable.

Cleveland Browns – I have no idea who the Browns quarterback is and neither do the Browns. Do the math.

Dallas Cowboys – HELL AND YES. If for no other reason than to make Tony Romo feel even more unwanted.

Denver Broncos – Do you really think Peyton wants ol’ preacher boy looking over his shoulder? The first game he throws four picks and looks bad doing so, the orange crush faithful will start chanting Tebow’s name unto the heavens.

Detroit Lions – What are the odds Stafford stays healthy again? I’m saying 40/60. Even Tebow can chuck up a prayer and have Megatron answer it.

Green Bay Packers – Watching Tebow royally fu*k up Mike McCarthy’s intricate pass-happy offense would be loads of fun. But John Kuhn’s role as goal-line leech would be in jeopardy and that’s just not acceptable.

Houston Texans – Nobody puts T.J. Yates in the corner. 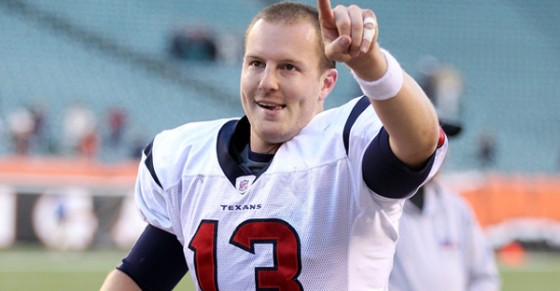 Texas ain't big enough for the both of us, Timmy.

Jacksonville Jaguars – The firm of Gabbert, Henne and Tebow specialize in ineptitude.

Miami Dolphins – Tebow would make one of the league’s most consistently bland teams watchable and relevant, which is precisely why he won’t be a Dolphin.

Minnesota Vikings – Shrink Tebow using the electromagnetic ray from Honey I Shrunk the Kids and implant him into Adrian Peterson’s shredded left knee. Then kick back and let the magic happen.

New England Patriots – Let me get this straight. They’re gonna put Tom Brady on the sidelines for eight to ten plays a game why? Belichick is a dick, but he’s not a moron.

New Orleans Saints – Only if he’s allowed to participate in the bounty program. 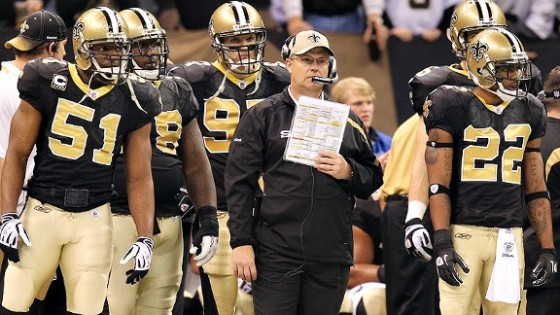 Cha-ching! That Jesus freak can hit.

New York Jets – No thanks. One weak-armed pretty boy is enough.

Oakland Raiders – Tebow in the Black Hole? The temptation to sin would be too great.

Philadelphia Eagles – Yeah, because that whole McNabb-Vick “Wildcat” experiment worked out so well in 2009.

San Francisco 49ers – They resigned Alex Smith, meaning they are content with their own below average passer. 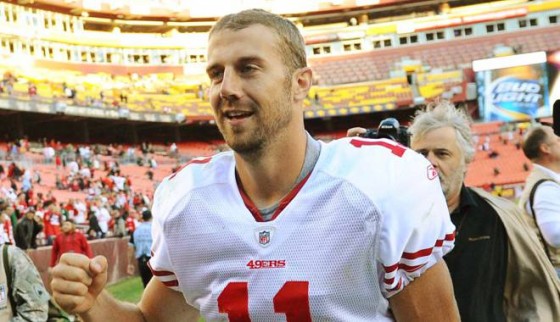 Nobody's more mediocre than me.

Seattle Seahawks – Why not? They acquire every other overrated quarterback.

Tampa Bay Buccaneers – Something tells me they didn’t hand Vinnie Jackson $55 million to watch him catch 40 balls a season.