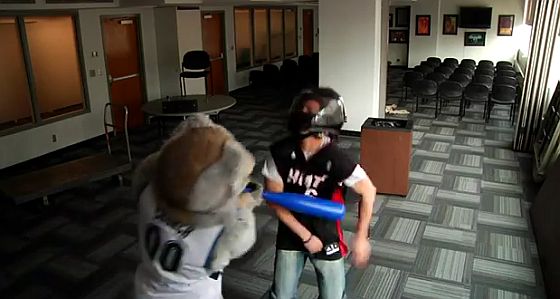 Usually when players face off during a game, management and coaches attempt to step in in the following days to avoid any lasting ill-will. That doesn’t seem to be the case in the flare up between the Minnesota Timberwolves’ JJ Barea and the Miami Heat’s Ray Allen. After getting hit with a flagrant foul last night, we expected Barea to come out today contrite and apologize. What we didn’t expect was for the team to issue this video.

In an obvious response to the Heat’s popular Harlem Shake video, the T-Wolves mascot comes out and absolutely pummels a fan in a heat jersey with a baseball bat. We hope for Minnesota’s sake that no fans get attacked the next time the two teams face off, or they could be looking at a significant lawsuit.

Oh, and the Heat beat the T-Wolves to win their 15th straight game, so they probably aren’t sweating some low end trash talk.