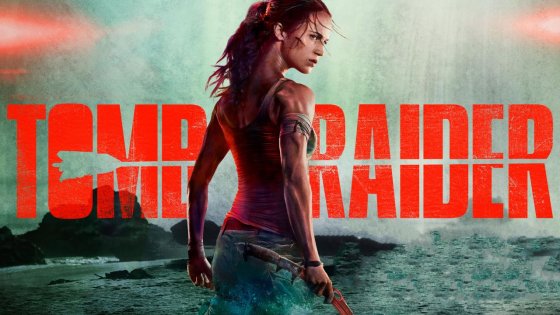 There are several ways to look at this new origin story/reboot of Tomb Raider, but it’s all going to come out the same: it’s not a bad movie, but it’s not exceptionally great. Saving this film from being one of the most derivative movies ever made are the charismatic actors and the extremely well-executed (albeit PG-13-safe) action sequences. It’s a movie that’s neither here nor there, not willing to push any button to make it dangerous or boring. 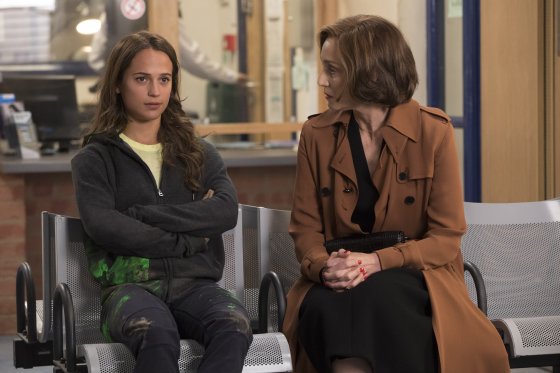 The least of Tomb Raider’s faults is having everyone look like they’re all-in on this adventure. Director Roar Uthaug (that’s an awesome name, by the way) coaxes compelling performances out of all of his leads, giving the film a more serious tone and giving better meaning and depth to the personal stakes involved. Of course, it helps to have the ever-wonderful Alicia Vikander as Lara Croft. She plays Croft blindingly, a complete opposite of Angelina Jolie’s take on this same character in 2001 and 2003. Vikander’s Croft is, thankfully, more reliant on her brains, strength, and emotion rather than sex appeal and flirty grins. 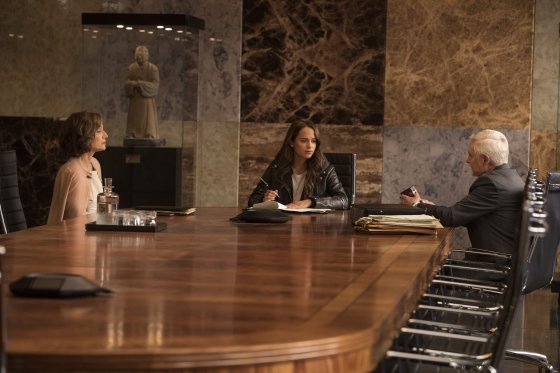 Vikander creates a very lived-in, down-to-Earth character in Lara Croft, a woman we first see in an MMA sparring match and couriering takeout meals on her bicycle. She appears to be a woman of little means: her boxing gym bill’s past due and she gets arrested doing what’s called a “Fox Hunt,” in which her fellow bike couriers chase her around London for a £600 prize. Contrary to all this, she actually has access to an inheritance giving her untold wealth and a castle-like estate. The only catch? She has to declare her father Richard (Dominic West) dead after his disappearance seven years prior, which she’s unwilling to do. 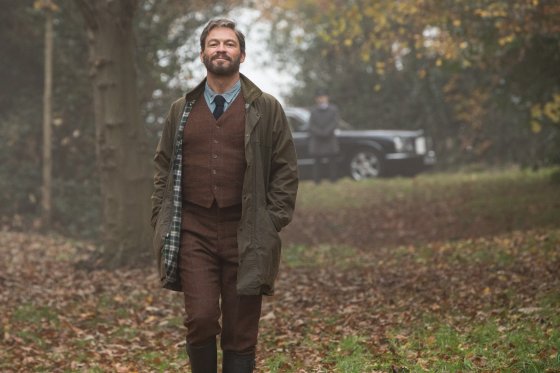 Immediately after being guilted by her legal guardian Ana (Kristen Scott Thomas) into signing her father’s declaration of death in absentia, she is given a puzzle which yields a key – a key which unlocks what might be a brand new life for her. It also unlocks the mystery of her father’s disappearance, as it leads to a secret room in which many historical artifacts and research are housed. This is no frivolous rich-girl’s undertaking – she still hasn’t completely signed the declaration, and she’s still penniless to follow the scant clues left behind by her father, which he’s posthumously ordered her to destroy. Scraping cash together, she follows one clue – a boat docked in Hong Kong called the Endurance – and hires Lu Ren (Daniel Wu) to take her to the island of Yamatai with the sole aim of finding out what happened to her father. 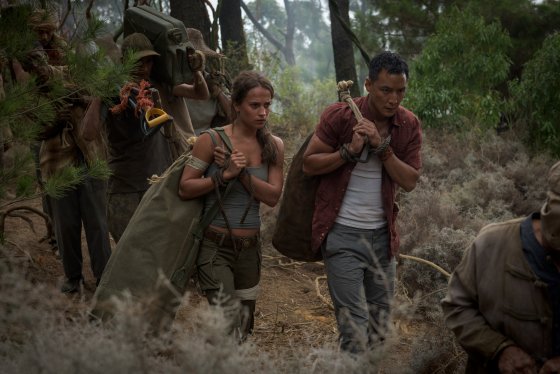 Both of them land squarely in the clutches of Mathias Vogel (Walton Goggins), who’s been looking for the tomb of Himiko, a Japanese princess whose spirit is rumored to have the magical capability of destroying humanity. Vogel, his team of mercenaries, and the slaves amassed have been searching the island for years with no luck… but now, thanks to Lara, they have all of Richard’s research. So, yes, it’s another case of what the site TVTropes.com calls “Nice Job Breaking It, Hero!”, but if this doesn’t happen, what kind of movie would we have? 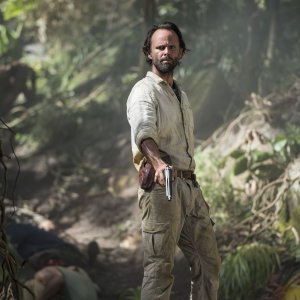 If you’re thinking, “Wait a sec… didn’t they do this in Indiana Jones and the Last Crusade?”, you’re not alone. Welcome to Tomb Raider’s king drawback: its lack of originality. With almost every scene from the beginning to the end, you could point to several different other films which may have done it a little better. The screenplay, by Geneva Robertson-Dworet and Alastair Siddons, seems to be more of an homage to the ‘80s and ‘90s films they grew up watching. 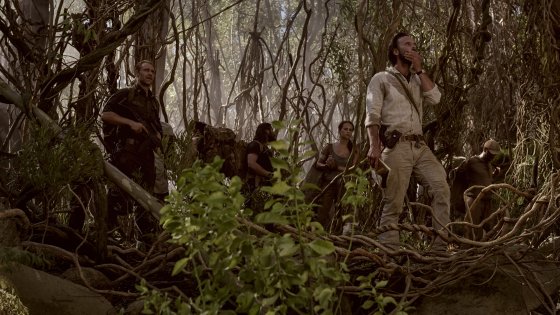 However, “homage” may be too light a term; “straight-up gank” might be more appropriate, as we see almost wholesale lifts from all of the Indiana Jones films (yes, even Crystal Skull), The Rock, Armour of God II: Operation Condor (a series which was, in and of itself, an homage to Indiana Jones), and other adventure hunter-type films. The film itself is an adaptation of the 2013 Tomb Raider video game series reboot, so should its lack of originality be a surprise? Probably not, but don’t be surprised if you find yourself sitting bolt upright in the movie theater, pointing at the screen suddenly and saying, “HEY! I’ve seen that before!” 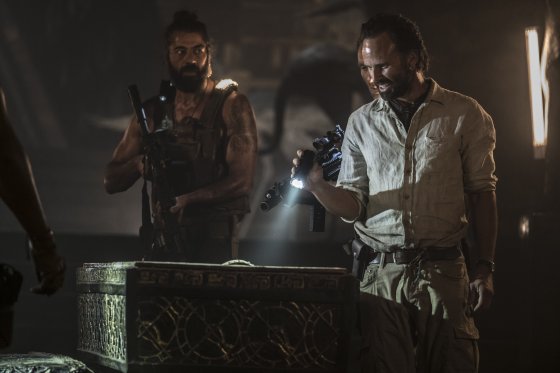 The other drawback this film shoves in your face is its rock-and-roll cinematography and editing. A film like Tomb Raider almost screams out to capture its action widely, to amaze the audience with its scope and thrilling action sequences. Unfortunately, it’s one of those movies where we see just enough of what the director wants you to see before we’re shouldered off to a reaction shot, removing all the danger posed by whatever is coming toward our actor. George Richmond’s photography tends to shake and rattle a little too much, but it’s a staple of PG-13 movies now; instead of actually showing the violence and intensity, let’s move the camera around and force the intensity! 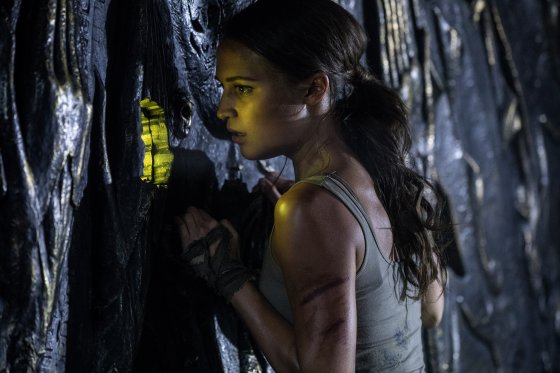 It’s not like there’s a ton of foul language or blood spurting which could force Tomb Raider into R territory, which is its final drawback: its surprising flatline vibe, as if the film itself is scared to push into the uncomfortable or unsafe. Fights, gunfire, the booby traps – they’re all treated as set dressing, not the set piece these ingredients should be. A fistfight between Lara and one of Vogel’s mercenaries is probably one of the most well-executed sequences of the whole film, located in a darkened jungle with both of their lives on the line. Watching this, you could feel the film unleashing its raw potential, but then it’s yanked quickly back for a more straight-ahead, guns-and-ammo kind of picture with almost zero urgency. 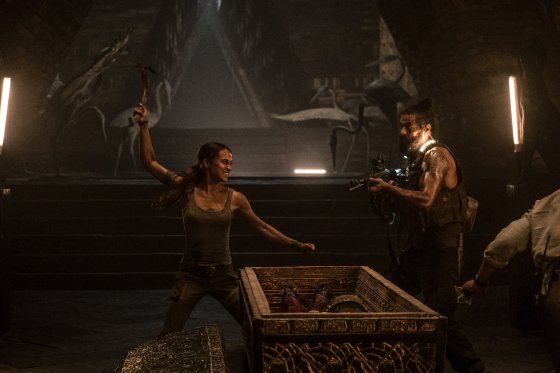 Yet the final product is still a fun movie you’d have no problem watching on a rainy Saturday afternoon. It’s made so by the actors selling the hell out of every last minute of this movie. Wikander delivers a terrific version of Lara Croft, giving her a soul, grit, and determination which escaped Angelina Jolie’s portrayal. There’s no sexpot ooze here; there’s just simply a girl on a mission getting things done her way. The usually-manic and whacked-out Goggins underplays Vogel slyly, with a weary tiredness hiding how far he’ll go to make sure he and his employers – the shadowy Trinity Organization – secure this artifact in a bid to consolidate their power. 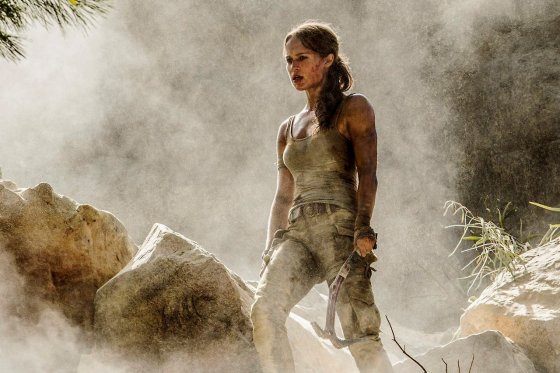 The cast definitely deserves credit for keeping this film from being a dud, and the film’s visuals and set pieces are certainly eye-catching. Lara’s early escape from Vogel and his mercenaries is worth a view on a big screen, especially the sequence where a river leads to a waterfall which leads to a precariously-perched plane. Uthaug certainly has a handle on how to ramp up action sequences and get good performances out of his actors; however, what’s missing are the normal peaks and valleys an action film needs to have, instead of running at the same pace – no matter how energetic a pace it is – for its entirety.

MPAA Rating: PG-13 for sequences of violence, action, and for some language.
Don’t get up until the actual credits start.
Running time: 115 minutes.
Released by Warner Bros. Pictures and Metro-Goldwyn-Mayer.

There are several ways to look at this new origin story/reboot of Tomb Raider, but it’s all going to come out the same: it’s not a bad movie, but it’s not exceptionally great.