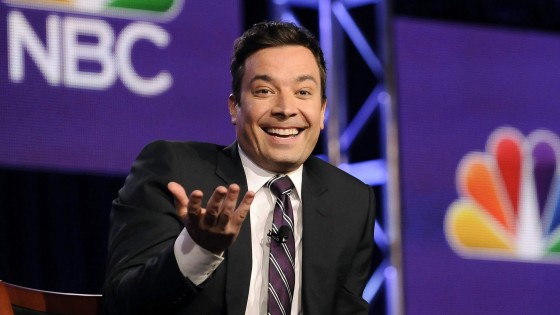 When Jimmy Fallon took over The Tonight Show in February of 2014, people had no idea what to expect. Before switching to The Tonight Show, he spent five years hosting Late Night with Jimmy Fallon. It was the perfect time slot for him to try out new skits and celebrity games. But could that same success move to an earlier time slot and still be as powerful? Jimmy Fallon has proven that the answer is yes. He moved up an hour and continued to dominate late night television. 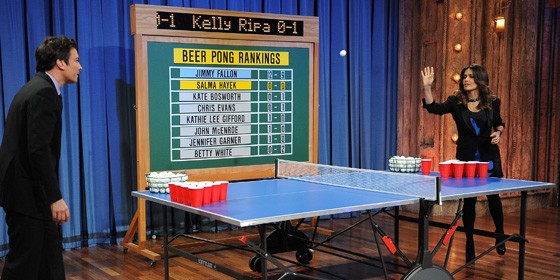 This past year has been the most successful of his late night career. He has invented new ways to watch television by taking games we all know and love, like Beer Pong, and challenging celebrities to a game. He also created many original ideas that will go down as the funniest skits in late night history. In honor of the show’s massive success, we have put together a list of the best moments of 2015 on The Tonight Show with Jimmy Fallon. Enjoy.

Details: Jimmy Fallon is 41 years old and grew up watching shows like Fresh Prince of Bel-Air so it is only natural he would use the show’s opener for his The Tonight Show for just one night.

Details: We are pretty sure Liam Neeson is going to make 100 Taken’s simply because he is one of the coolest guys in the World. Did we also mention he was the most intimidating?

Details: This sketch sounds horrific but it was anything but that. When the camera revealed the head of Lionel Richie, the crowd, and most people watching at home, couldn’t stop laughing.

Details: Ryan Reynolds is one of the best dry humorists in Hollywood. His sarcasm and delivery gives him lots to work with when making fun of someone like Jimmy Fallon.

Details: Heidi Klum is so beautiful, it would be tough to lie to her about anything but Jimmy Fallon figured out a great way to do it and beat her in his most popular game, Box of Lies.

20. Come Dance With Us – Jennifer Lawrence

Details: This one goes back to the another Jennifer Lawrence appearance on The Tonight Show when they shared with the audience an inside joke between themselves where they kept saying this over and over. If you knew about the story, then this skit would have been hilarious.

Details: Vince Vaughn is the King of add lib so the 5-second summary game was perfect. Well, perfect for when he had to guess.

Details: People will either love or hate Tom Cruise, there is no middle ground. But everyone was laughing when he lip sang “Paradise by the Dashboard Light.”

Details: Kevin Hart is everywhere. He has about 294 movies that have come out since June yet he remains one of the funniest guys in Hollywood. Now that takes talent.

Details: Robert Downey Jr. is a talent unlike any other. He can do comedy, drama, science-fiction, or any other genre of movie there is and he does it with ease.

Details: Ariana Grande’s impression of Celine Dion is hands down the greatest impression of the French singer that anyone has been able to pull-off.

Details: Chris Pratt is hilarious. Chris Evans in Captain America. So imagine taking a group photo only to find out they were photobombing you the entire time.

Details: Jimmy Fallon and Tina Fey have the best chemistry on-air of any friends in Hollywood. But when you add Amy Poehler, you get the funniest trio on TV.

Details: Jimmy Fallon proves, once again, that he can make anything happen, and he brings back Kenan and Kel for a very funny sketch.

Details: Everthing Tom Hanks touches turns to gold. It is no different when on late night TV as he does it there too.

Details: This is going to eventual get old, right? Not as long as Jimmy Fallon and Justin Timberlake have their bromance broadcasted for all to see.

Details: Joseph Gordon-Levitt has become one of the most entertaining person on TV or at the movie theaters. He shows off his ability to sing as he sings a Rihanna favorite.

Details: The original kid theater was when Michael Keaton guest starred and they did Birdman. It was the best title they could have ever used because the results were just plain amazing.

Details: Kristen Wiig once appeared on the show as Michael Jordan and it was hilarious. So when she arrived with her fake dragon and long blonde hair, the expectations were high yet she crushed it still.

Details: Beyonce would be so proud. Our eyes, not so much.

Details: There is something wrong about asking little children to write a script for a movie about male strippers. But it is fine because they were only told the title of the movie, nothing else.

4. Hawkeye Singing About His Super Powers

Details: Ellen Degeneres and Justin Timberlake starred in this episode of The Tonight Show and earned every single laugh from the audience.

Details: The Point Pleasant Police Department was first done by Alec Baldwin and then John Hamm yet the funniest one ever was earlier this year when Bill Hader killed it.

1. Saved By The Bell Reunion

Details: This was years in the making as Jimmy Fallon started trying to organize the Saved by the Bell reunion since he began his Late Night career. From Zack Morris to Kelly Kapowski, this was easily the best moment on The Tonight Show for 2015.