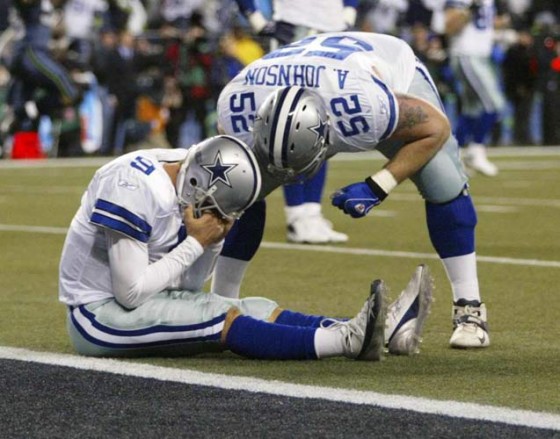 Another week in the NFL, another game messed up by Tony Romo, and in that cycle, another week of other famous sports figures yelling at Romo for sucking.

Lots of former Dallas greats have commented about Romo, fueling the sportswriters and columnists, instead of trying to help their alma mater by alleviating pressure on their team. Emmitt Smith questioned Romo’s leadership. Troy Aikman has, too! Michael Irvin said something racially charged.

This week, Deion Sanders took a shot at Romo for letting a 27-3 lead slip away against the Lions to a 34-30 loss.

“I don’t understand this guy,” Sanders said on the NFL Network. “Just when you want to believe in him, heroic effort, came back against San Francisco, they said punctured lung and everything. And we praised him, we said, ‘Yeah, he’s that leader, he’s their guy.’ And then you come and do this. What are you thinking?” 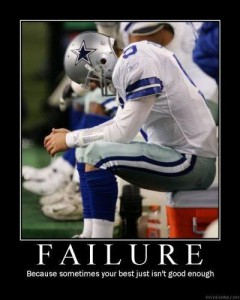 Romo has basically been forced in the position of being a leader, because there really isn’t anyone else on offense to do so. Someone on the Dallas Cowboys has to be the leader, even if they are called “America’s Team.” The wide receivers and running backs are too young, and no one sees the offensive linemen as true leaders, even if they are a source of inspiration. A leader scores points! It pretty much goes to Romo by default. The media loves stories about individuals, so they need to find individuals. Romo is that unlucky guy scrutinized in Dallas and ESPN studios.

It’s not like Romo was under the public eye when he came into the NFL. He wasn’t a first-round pick with expectations to immediately start. Out of Eastern Illinois University, Romo went undrafted in 2003 and eventually started for the Cowboys in 2006 after no other options. With great stats, his reputation built up, and so did the pressure.

The weirdest part about this is that Romo doesn’t come out and attack other teammates, even if media speculates the drama with them, like the case of Terrell Owens. He doesn’t say anything controversial, and normally spouts generic sound bites about getting better next week or practicing harder. When Romo makes guarantees, he doesn’t say he’ll beat the other team; he vows to play better in the next game. He’s a generally bland person who enjoys golf in the offseason (which is a distraction, according to the media).

Romo isn’t a bad quarterback, but the fact that he fails under pressure makes people call him “the LeBron of the NFL.” For a guy who doesn’t really say much, everyone loves talking about him.